Week Past, Week Ahead: Syria – “Reconciliation” v. “Starvation or Surrender” 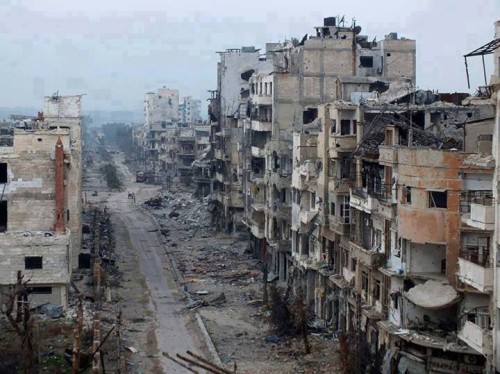 PHOTO: Damascus suburb of Moadamiya, besieged for 15 months until “truce” in January

The big political move in Syria in the past week has been the Assad regime’s proclamation of “reconciliation”, through local truces near Damascus.

In the last two months, truces have been announced in suburbs such as Babbila, Barzeh, and Moadmiya. Supported by Russia, the regime has proclaimed that the ceasefire agreements, with promises of aid and reconstruction, promise stability in areas which have long been held by insurgents.

Activists counter that the agreements were forced by the regime’s “surrender or starve” policy, and have been accompanied by detentions and continued restrictions on aid. This weekend the Syrian military re-imposed a blockade on Moadamiya, demanding that Free Syrian Army members lay down arms. Fighting also broke out in Yarmouk in southern Damascus, where 15,000 residents had been under a siege since July.

In an incident related to the sieges, scores of people were killed by a series of explosives set by the Syrian military near the Damascus suburb of Otaiba. The Syrian military claimed 175 “terrorists” were slain. The opposition and a survivor said most of the dead in the convoy, escorted by 40 insurgents, were civilians trying to flee blockaded villages.

There was little change in the general military situation, with Syrian forces and Hezbollah still trying to move on the city of Yabroud, north of Damascus. Insurgents claimed that they had repelled the attack, with hundreds of casualties among regime troops.

The Iraqi-led group withdrew from some towns, such as Azaz on the Turkish border, to defend key positions such as the city of Raqqa from attack. However, the ultimatum expired without any surge in insurgent operations.

The Assad regime’s “reconciliation” — primarily an attempt to pacify insurgents near Damascus — has achieved limited gains. These are tenous, however, and insurgents still control other areas, such as Darayya, despite siege and intense bombardment by the Syrian military.

The effort is also unlikely to shift the wider military situation. High-profile declarations of aid and evacuation in Homs have brought no significant change, and the regime has yet to break through in northern Syria. Further south, Syrian forces have yet to claim the prize of Yabroud and insurgents appear to be holding their recently-won territory near Quneitra, close to the demilitarized zone with Israel.

The final showdown between insurgents and the Islamic State of Iraq and as-Sham is unlikely to take place; however, ISIS has had to retreat in the face of the ultimatum after its recent attacks and bombings.

Video Analysis: Islamic State of Iraq vs. Everybody
Video Analysis: How US is Letting Insurgency Hang in the Breeze
ISIS Imposes “Dhimma” Conditions On Christians In Raqqa