Syria: UN “Shocked by Condition of Civilians in Yarmouk” 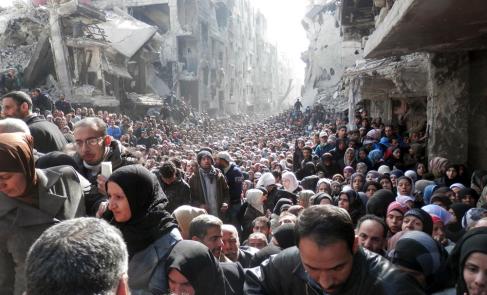 The United Nations Relief and Works Agency released a statement on Monday about the situation in the Yarmouk section of Damascus, cut off since July by Syrian forces:

UNRWA’s Commissioner General, Filippo Grandi, entered Yarmouk camp during the resumption of UNRWA’s humanitarian aid distribution (on Monday morning). He was shocked by the condition of the Palestine refugees he spoke to and the extent of war damage done to homes.

“I am deeply disturbed and shaken by what I observed today. The Palestine refugees with whom I spoke were traumatized by what they have lived through, and many were in evident need of immediate support, particularly food and medical treatment. What I have seen and heard today underlines the timeliness of the UN Security Council resolution 2139 on Humanitarian Access and the need for all sides to implement the resolution without fail. ” 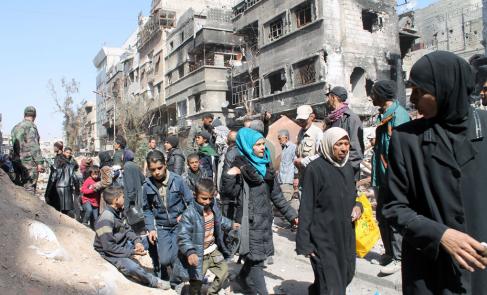 Yarmouk Camp has been sealed since July 2013, resulting in acute and widespread deprivation, including severe malnutrition, while civilian residents are constantly exposed to the threat of death, injuries and trauma of the armed conflict.

See Syria Voices: “We Have Been Through Everything, and There is Only Hunger Left”

UNRWA welcomes the support of Syrian authorities to resume distribution today. During his three day visit to Syria, Grandi was encouraged by assurances given by the authorities that access will be maintained and expanded, and ultimately lead to the safe return of Palestine refugees to their homes.

“We hope that the positive developments in Yarmouk can give momentum to peaceful dialogue between all parties so that there can be humanitarian access for all civilians in Syria who have suffered enough”, said Grandi.

UNRWA reiterates the demands of the international community for the full and unhindered humanitarian access to all conflict-affected communities in Syria.

Following clashes in northern Yarmouk on the night of 7/8 February, UNRWA distribution of food parcels and medical supplies had been suspended. Until this point, UNRWA had successfully distributed 7,000 food parcels, 10,000 polio vaccines and a range of other medical supplements to civilians inside the camp, after partial humanitarian access was granted on 18 January and 20 February.