Syria: Notes on a Dagestani-Led Group in Islamic State of Iraq 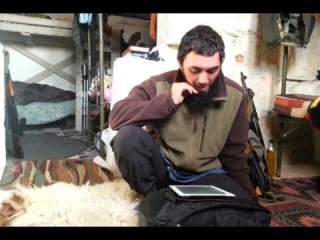 Among them is the jamaat of a Dagestani fighter named Abu Hanif.

Abu Hanif’s jamaat is part of the Islamic State of Iraq and as-Sham but like other groups within ISIS fights as a distinct unit, for reasons of fraternity and kinship between members of the jamaat, who will have fought together before joining ISIS, and also because the group’s members share a common language.

The jamaat consists of Russian-speaking fighters from various parts of Russia, the North Caucasus —– even Chechnya, though most Chechen fighters are with Chechen-led groups, which in ISIS means Umar Shishani’s jamaat —– and Kazakhstan.

Abu Hanif originally founded a jamaat in Aleppo Province with another Dagestani, (the now infamous) Abu Banat (more on his rather bizarre story at a later date). 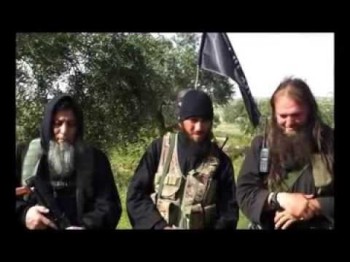 Like several other North Caucasian fighters in Syria, Abu Hanif originally kept his own website, sharhsunna.org. That site has not been online since May, but the Internet archive service Wayback Machine has a snapshot of the site from that date, which confirms that the site belongs to Abu Banat, and that the group has an affiliation with ISIS.

The site’s strap line is “the site of the Mujahideen of Al Qa’eda, the Katiba of Amir Abu Banat”.

There is a general trend now, however, for North Caucasian fighters to open VK accounts rather than maintain websites. VK offers the fighters an easier way to connect with sympathizers including in the Russian Federation, and many of the accounts make periodic requests for donations, even including bank account details.

In one post from his old site, preserved here on a Kazak website, Abu Hanif is asked whether he will divulge his full name, and gives the following rather touchy response:

What a funny man you are! I should tell you my biography? Starting with the hospital I was born in, what kindergarten I went to, what the head of the kindergarten was called, the school I went to etc.??

You’d be better off contacting me and I’ll invite you to visit me and I will show you my birth certificate, passport data. We’ll sit down and talk, have a cup of tea with gozinaki (a traditional Georgian confectionary). I’ll tell you my last name, first name, since you’re so curious.

When I was investigated, when I was in Russia (from where I emigrated and won’t return), they called me into their offices and asked me similar questions. Maybe you decided that I’m your work colleague? If so then I’ve got to disappoint you…

Abu Hanif has also made a number of videos of himself in Syria, mostly portraying himself as a knowledgeable jihadi leader. In this most recent video Abu Hanif visits a Kazak jamaat and answers questions about various aspects of jihad.

As well as the account belonging to the entire jamaat, small number of fighters from the jamaat also maintain personal accounts on VK. Among them is a fighter who names himself as Abu-Jarah Daghestani (Abu Jarah from Dagestan).

On January 11, Abu-Jarah Daghestani posted this account of the fighting between ISIS and insurgent groups, and answers questions from other posters including about relatives who may have been killed in fighting in Syria (I have tried to preserve some flavor of the original language but not the spelling errors):

Aleikum as-Salam to all those who write. I can’t reply to everyone personally, there’s no time. So I’m answering several questions in this post.

As I already wrote before, on the first day of the conflict all the groups started fighting, but when they saw resistance their ardor was suppressed and only those groups who realized they had no other choice continued fighting. None of us will rest until every one of those scum is dead.

The Islamic Front are takfiris because they announced that they’re going to establish an Islamic democracy (that sounds just as dumb as “Islamic infidels”). Anyone who doesn’t think that this makes them takfiris is just one of them.

It’s really acceptable that there are Mujahideen among them who don’t know about the plans of their Amirs to leave Islam. If the plans of these Amirs changed then that changes a lot too. Actually the whole project of the Islamic Front was thought up as a force that could dislodge the “terrorist groups” from Sham.

What about Jabhat al Nusra – recently a lot of groups joined them who had previously been in the FSA. These groups together with the rest of the FSA infidels started on ISIS, ignoring the ban on that from JAN’s Amir Jolani (e.g. the group of mahmoud afasha – I’m not gonna write it with capital letters – from Dar Iza). Those who had a normal faith didn’t take up arms against ISIS but the opposite, they helped, may Allah bless them.

What about what’s going on today – well thank Allah everything is under control. Practically everywhere, the apostates’ horns have been broken off. The scum still try it on close to the Turkish borer where they get support in terms of weapons and cash.

The complicated situation can’t be considered a fitna between two groups of Muslims (cuz there are only Muslims on one side of the fight) however this is a big fitna for the Mujahideen since in the last three years this is the first time a complex situation arose….

Some could not resist and left Syria and some said they wanted no part in ISIS. But it is not known how much the situation has helped the infidels. On the side of the FSA there are the infidels from the (Kurdish) YPG which is known for its snipers – but that makes little difference.

There are dozens of martyrs all around Sham who are waiting to meet the scum to send them off to Our Lord, who they’re gonna answer to for every drop of blood of Muslims they killed.