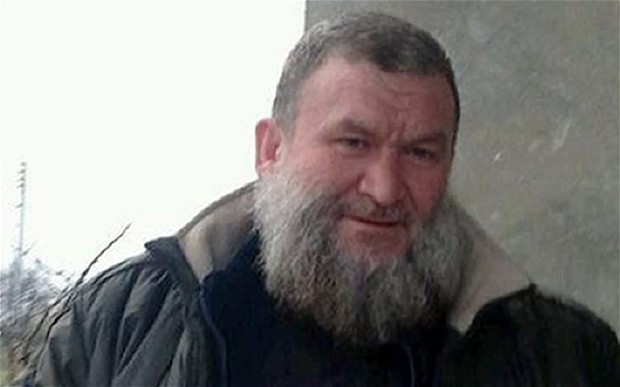 Earlier this week, we noted the assassination of “Al Qa’eda mediator” Abu Khaled al-Suri in an attack on the headquarters of the insurgent faction Ahrar al-Sham in Aleppo.

Sham News, a Russian-language site linked to North Caucasian fighters in Syria, interviewed Abdul Karim Krimsky (“the Crimean”) — the second-in-command to Salahuddin Shishani, the leader of independent North Caucasian faction Jaish al-Muhajireen wal-Ansar — who was present shortly after the death of al-Suri.

We reached the base of Ahrar a-Sham shortly after the assassination of Sheikh Abu Umeir, who was known among the Mujahideen as Abu Khaled al-Suri.

It happened sometime in the afternoon. We almost arrived at the base at the same time as the event occurred. We found out everything that happened from the mujahideen of Ahrar a-Sham.

Two armed men had come to the base. They came on foot, without a car. Lots of armed mujahideen come to the base, they ask the checkpoint how to get someplace or other, or how to find this or that mujahid or amir.

So that’s why the Ahrar a-Sham base weren’t on the alert. They noticed that they (the armed men) spoke in a local Syrian dialect.

They came close to the building and one of them suddenly opened fire with a machine gun. Everyone who was in the yard was wounded or killed.

At that moment none of the mujahideen who were in the yard of the checkpoint were carrying a machine gun, though some had handguns. Only (al-Suri) was holding a AK-SU-74.

The Sheikh (al-Suri) was in the room and he opened fire in response through a window. He was mortally wounded in the chest.

The second guy, under cover of the first guy’s machine gun fire, chucked grenades into the building. Then, the mujahideen in the base overcame their surprise and starting to return fire.

The one who burst into the building was wounded but he was able to reach the second floor and then he blew himself up. The first one continued to fire, dashing from place to place But he was killed with return fire.

May Allah damn these suicides and may those who sent them be damned.

(Al-Suri) was a remarkable man. He was a colleague and friend of Osama Bin Laden, a fellow campaigner and representative of Ayman al-Zawahiri in Syria. He was given the task of making peace between the Mujahideen in Syria.

We met him more than once when our brigade was in Hama. He gave us great, extensive help when we were there. I did not meet a more pleasant man. Joyful, pleasant, his face shone with goodwill and wisdom.

In conversation he was very gracious and attentive to the person to whom he was talking. He was very simple and direct with people. When any questions arose that demanded his participation he said, “I am a slave of Allah and your servant. Speak, ask, and I will do everything in my power for you.”

He waged jihad for over 20 years. The infidels were trying to kill him for many years already. The USA’s CIA put a price on his head.

Now he is no more. This is not just a loss for his brigade and for Syria but it is no exaggeration to say for the Ummah as well.

That gang of arrogant villains who planned this evil act will be sorry for it.

Of course everyone is asking, who did it?

Right now it’s hard to say. It’s only possible to describe those who did it. Their arrogance is good for cowardice and stupidity. Dumb and brainless agents carrying out the orders of the arrogant.

Either they arrogantly recognize that this was their own doing or they are staying quiet from cowardice.

In either case, the truth will out.