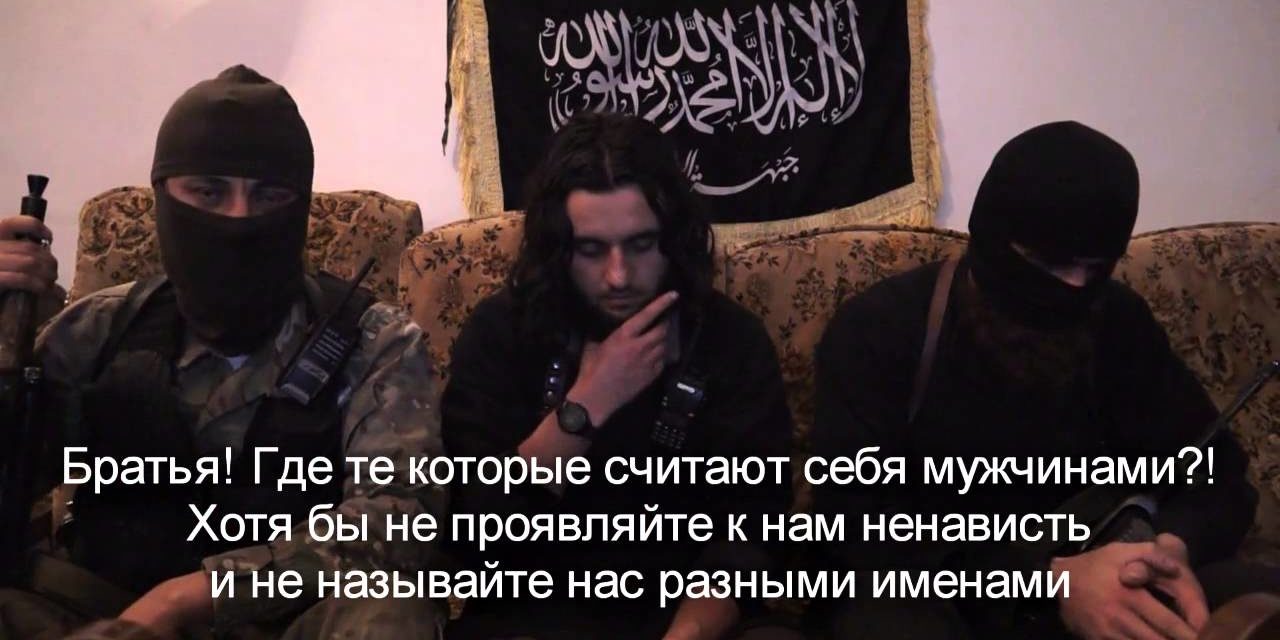 The new leader of Sayfullakh Shishani’s jamaat, a Chechen native named as Mohammed Khorasani, has made a video address in which he calls on Chechens in Europe and Chechnya to come to Syria and fight.

Sayfullakh’s jamaat fights under the auspices of Jabhat al-Nusra but is a distinct unit within that Islamist faction.

Sayfullakh was killed by a stray bullet or shrapnel after retreating during a failed attempt to storm the Aleppo Central Prison earlier this month.

Even though the address talks about waging jihad against the infidels, the speaker is clearly focused on the Chechen insurgency, seeing the fight in Syria as part of that struggle or a projected extension of it. He addresses his messages to Chechens, speaking in the native language. He mentions the situation after the First Chechen War and accuses Russia of invading “our land” now. The speaker ends with a direct address to Chechen leader Ramzan Kadyrov.

The video appears to have been made in an apartment, most likely in Aleppo where the jamaat is located.

Key points from the initial 6 1/2-minute address by one of the jamaat’s fighters:

Sayfullakh Shishani was of great use to the Ummah, he was the best of us. The Ummah lost a man who strived on the path of Allah and raised his word and who many of us loved, those who were together with him and those who didn’t meet him but knew about him from things that they heard.

However the jihad has not stopped. Allah said the jihad would continue until Judgement Day. And we will try to continue our work on this blessed land.

Those who die on the path of Allah aren’t considered dead, Allah says they are alive.

Everyone knows that our katiba went into Jabhat al-Nusra, when Sayfullakh Shishani was with us, and now after he left everything stayed the same.

And now we can hear a lot of nice sounding words about our group, like we are fighting with the infidels against Muslims, or that we are stealing things, and taking property from Muslims, that we are infidels and cowards.

Such a lot has been said that it needs an answer….

We ask Allah to show who these people really are.

The Aleppo Central Prison – there are Muslims there – our people with our sisters and children.

I call on you not to accuse your brothers of things that you don’t know and for which you have no proof. Don’t be one of those who creates fitna among Muslims. Say what you know or stay quiet.

Like I said before, our work continues and our group who had sworn an oath to Sayfullakh Shishani has agreed that that amir of our group will be Mohammad Khorasany.

Khorasany, sitting to the left of the initial speaker, takes over with an address in Chechen:

Our brother Sayfullakh Shishani was a lion of the Ummah, favored by Allah and became a martyr.

This strength comes from Allah. Brothers, consider it – this path has continued for 14 centuries.

Inshallah this path will continue and we will also be on that path for as long as Allah has prescribed it. We take on ourselves that responsibility, to serve in the religion of Allah.

May he strengthen us in faith.

Those brothers who spread rumors and lies about us, may Allah put them on the right path.

We came to the land of Sham not to fight each other but to raise the word of Allah.

Instead of being enemies let’s unite on the path of Allah and fight together.

The attention of the entire world is turned to us.

Those who bear this religion, they are not Muslims who are living under the taghut, but Mujahideen who Allah trusted with this religion.

And since it’s so, let’s measure up to that name and let’s be an example for each other.

I want to address the brothers who live under the taghut, I want to give some advice.

Don’t follow those who get money from the taghut and who try to tranquilize the people with their cradles.

You heard that here not a small amount of blood has been spilled, women and children, doesn’t that bother you?

Maybe for you the blood of Muslims is cheaper than that of animals? Where are you looking? Or are you waiting for when its your turn for them to get to you?

Hasn’t the time come? Don’t you understand the same hadiths and Quran verses that we understand?

You’ll find on the internet everything that you need, so can’t you find the verse about the obligation to wage jihad?

Open your eyes, brothers. On the judgement day you will answer for every drop of Muslim blood spilled when you were being silent.

Let’s say it again, our words are only for those who believe in Allah and in the judgment day. The others can just not listen.

If these words aren’t enough for you to come to the faith, then there aren’t any more words for you.

Don’t be late to answer the all or it will be too late. Let Allah put you on the path of faith.

Do what even women do, pray. Even just don’t reprimand us.

On judgement day you’ll get a reward for all your good deeds, don’t waste time!

We went out onto this path and we are ready to give our souls, we went out to raise the word of Allah and this curse that reaches us that we are somehow fighting with the infidels against Muslims that we left Allah.

To the brothers in Chechnya I want to say, the jihad here is going on and will go on while there are still Muslims. Until Judgement Day.

I want to say one thing, today we are trying to establish fairness, Sharia Law, to chuck out democracy and for that they call us terrorists.

And countries like America and Russia immediately invade our lands, saying that they’ve come to help Muslims. Every Muslim must know that the infidels who have their own religion will never help us establish Islam.

Why don’t you understand this?

And now like Sayfullakh said we have a a force, an army, weapons and inshallah we will fight. If we are killed then those who come after us will fight.

And I say to those in Europe and those in Chechnya, when I came here and I didn’t know my way around and I didn’t have any contacts, and I prayed to Allah that he would bring me to this land and he brought me here.

Let us go out and fight against these infidels. Today you’re sitting at home, when you die in your beds, it’ll be too late to be sorry about it.

Let’s rise up together and spread the religion of Allah and help our poor Ummah, when the Ummah needs us. If we don’t go out now then when will we?

We remember what happened in Chechnya after the first war. We know how several Mujahideen started to build themselves a home and several of them, when they’d gotten together 10 fighters, called themselves a brigadier general. They became arrogant.

Today our Ummah has been lowered by the infidels who have established their politics over the Muslims and several so called Muslims have followed them for the bones that the infidels throw them, but if they were Muslims they wouldn’t act that way.

If we fight the infidels then Allah will give us force, an army and weapons.

We will finish here in Syria, those are with us in this life, come here where the Ummah needs you.

We need Sayfullakh but his time has come and he has left having done whatever was in his strength, but we will not give up and we will continue that path.

And what about Ramzan Kadyrov (the Chechen leader), I want to tell him the following: That conversation you had after Sayfullakh was killed, when you said you killed him and that your intelligence services were waiting for us everywhere, it’s not worth two kopecks, if you don’t come and fight us.

We are here, and here we will stay, where the Ummah needs our help, we will go there and if not us then those who come after us.

To those in Europe and Chechnya I want to say, let’s rise up and unite and fight the infidels in this blessed land. That is a great gift from Allah. I’m ready to give my life for Allah.