Syria Daily, Feb 27: Otaiba – An Ambush of 175 Insurgents or 45 Civilians Killed by Regime? 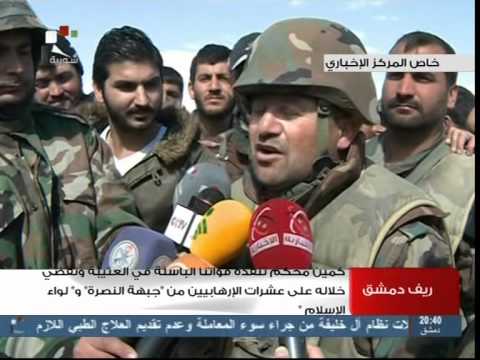 Syria’s State media claimed on Wednesday that regime forces killed 175 insurgents in an ambush near Otaiba, southeast of Damascus.

Hezbollah’s Al-Manar TV broadcast footage of the attack, showing at least two large bombs that were detonated along the road. Pro-regime Al-Ikhbariya showing soldiers moving amid dozens of bodies and weapons which it were claimed were those of slain opposition fighters.

A Syrian Army colonel told the Al-Mayadeen channel that the insurgents, mainly from Jabhat al-Nusra and the Islamic Front, lost “more than 150 men”.

Opposition sources disputed the account, saying the bodies were those of civilians fleeing besieged villages in East Ghouta Province. Insurgents have claimed, including in a lengthy statement on Saturday, that people trying to escape have been shot by snipers.

Susan Ahmad, an activist in Eastern Ghouta, said civilians “tried to run away from the government siege….They were shelled and later Assad’s forces shot the wounded.”

In the clip below (Warning: Graphic Images), there is a stuffed animal at 0:24:

The Syrian military has blocked insurgent-held villages in East Ghouta, which the regime attacked with chemical weapons last August, in a months-long effort to force surrenders. In December, the Islamic Front and other factions launched an offensive in the province to break the siege.

The Local Coordination Committees said that, of 209 people killed in Syria on Thursday, 162 were in Damascus Province. All but eight of yesterday’s casualties across the country were men.

GRAPHIC: #Syria: After the air strike on civilians in Masaken Hanano in #Aleppo today. #Assad_violates_2139 pic.twitter.com/zfKysEsdh6

284 Bombs on Damascus Suburb of Darayya Since Start of Year

Activists reported two more barrel bombs on Wednesday on Darayya, southwest of Damascus, bringing the total to 284 bombs since the start of the year.

Claimed video from a regime helicopter just north of Mezzeh airbase near Darayya:

The Syrian air force has continued the barrel bombing of Yabroud, 75 kilometers (48 miles) northwest of Damascus, amid a three-week regime offensive putting pressure on the city.

The Local Coordination Committees said Tuesday that “violent clashes and battles” are occurring on the outskirts of Yabroud, the largest city in the Qalamoun region.

The pro-regime newspaper al-Watan said Wednesday that the Syrian army has “implemented a complete blockade of the town”.

The opposition Syrian National Coalition has blamed dozens of bodies near Otaiba on the Syrian military and Hezbollah, condemning “the cowardly act of killing civilians who tried to escape the siege imposed by the Assad regime”.

The Coalition statement called on the United Nations to carry out an independent investigation and hold accountable those responsible for the killings: “The Assad regime must realize it cannot continue to out horrific abuses against civilians with impunity.”

The Free Syrian Army claims that regime forces have been unable to break an insurgent siege of Deir Ez Zor Airport in eastern Syria after three days of fighting.

Zaman al-Wasl reports that Turkey has reopened the Bab al-Hawa border crossing after clashes inside a refugee camp earlier this month.

The insurgent bloc Islamic Front had tried to move refugees to nearby camps because of Turkish objections to gunmen at the Bab al-Hawa complex. Subsequent fighting left several people dead, and Turkey closed the crossing.

The Front has now carried out the re-location of almost all the displaced Syrians.

A bomb has killed 20 people and wounded dozens in Sinjar, in eastern Idlib Province:

Most of the martyrs were women who were shopping. The explosion was a market which has a cloth bazaar every Thursday, visited by browsers from more than 30 kilometers away.

Many people are still missing. 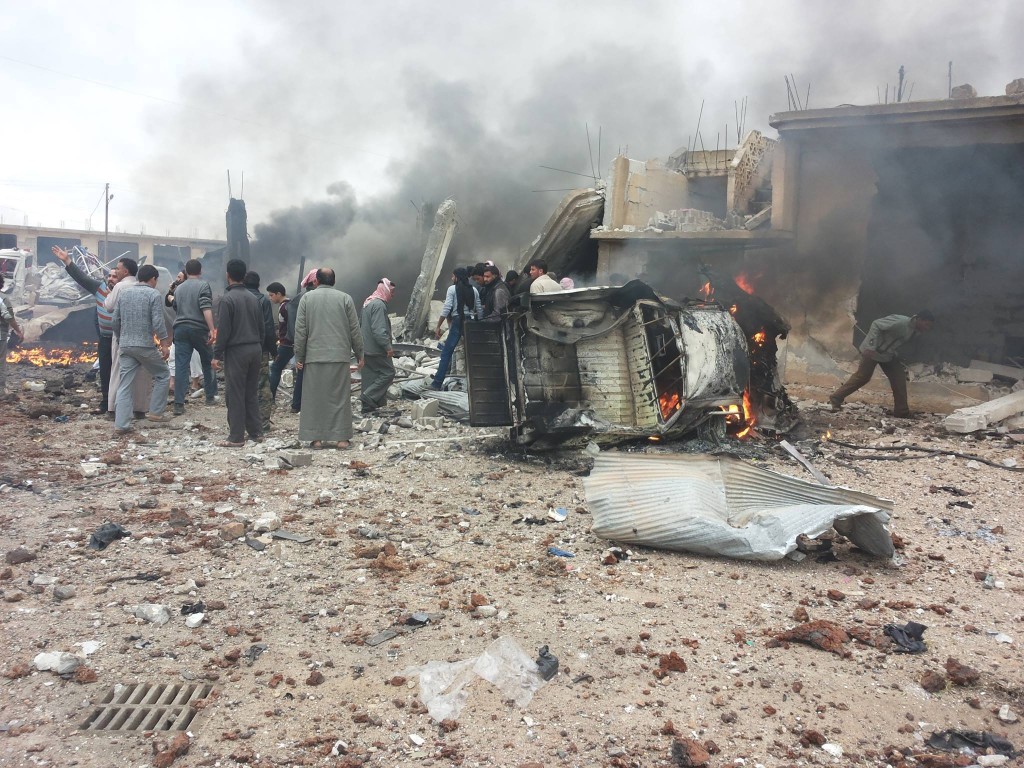 The area is under insurgent control, raising suspicions that the Islamic State of Iraq carried out the attack as part of its fight with opposition factions:

Assad emphasized cooperation “to confront extremism and terrorism” and pressure “to stop all forms of support offered by some states to the terrorist groups and extremist powers”, while thanking Iran for its support.

Tehran has provided billions of dollars in economic assistance, including oil, to Damascus. Its military have provided logistical advice and intelligence and trained pro-Assad militia.

The US State Department said Wednesday that Syrian authorities arrested relatives of the opposition’s delegation to the Geneva II conference in January and February.

Among those held was Mahmoud Sabra, the brother of delegation member Mohammed Sabra.

State Department spokeswoman Jen Psaki said the US was “outraged” by reports that the regime “arrested family members of the Syrian opposition coalition delegation…, designated delegates as terrorists, and seized delegates’ assets”.

Psaki continued, “We call on the regime to immediately and unconditionally release all those unfairly arrested.”