Week Past, Week Ahead: Syria — Is Assad Regime’s Offensive Succeeding? 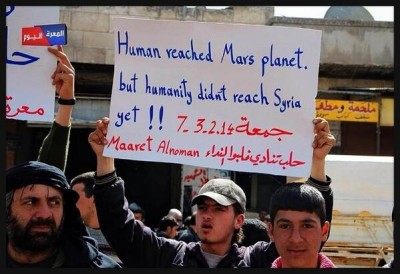 PHOTO: Protest in Maarat al-Nu’man in Idlib Province on Friday

The week in Syria was marked by the disputed claims of the Assad regime that it had advanced in its Qalamoun offensive, both north of Damascus and in Homs Province.

The Syrian military said on Saturday that it had taken Zara, one of the remaining insurgent positions between Homs and the Lebanese border. Earlier in the week, it claimed success close to Yabroud, the largest city in the Qalamoun region, which it has been attacking for almost a month.

The Zara claim was confirmed by insurgent sources. However, the declaration of advance near Yabroud appeared to be premature — insurgents said they re-took Rima Farms and territory close to the village of Sahel, killing scores of Syrian troops and Hezbollah.

Destruction from regime airstrikes on Yabroud:

Meanwhile, Syrian forces were under pressure elsewhere, notably in Aleppo Province with the advance of both Syrian brigades and foreign fighters.

There was no apparent movement in the position in southern Syria, where insurgents have taken some territory in the last month, although a report said that the US had cut off supplies to opposition fighters on the point of taking a regime base suspected of holding chemical weapons stocks.

The Islamic State of Iraq and as-Sham, in battles with Syrian insurgents since early January, repeated that it is at war with the opposition forces after their “campaign of betrayal and treason”.

The lack of hope for any shift towards a political resolution was highlighted by United Nations mediator Lakhdar Brahimi, who said, “What’s the point in more talks?” after the failure of discussions in Geneva in January and February.

The humanitarian situation continued to be bleak — one headline was the cut-off of aid to the besieged Damascus neighborhood of Yarmouk after renewed clashes between insurgents and the Syrian military.

Both sides will claim success — sometimes accurately — on the military front. However, the overall situation will continue to be one of grinding stalemate.

Even if the Assad regime takes the big prize of Yabroud, northeast of Damascus, the victory will have taken longer than it hoped — and insurgents are likely to remain in much of the surrounding territory. In Aleppo Province, there is no prospect of breakthrough by either side, and positions have shifted little in other areas of the country.

UN mediator Brahimi’s statement last week was confirmation that the political process, which was close to hopeless even as Geneva talks were pursued, is comatose.

Reports Of Nuraddin Az-Zinki, Jaish al-Muhajireen wal Ansar Advance on Aleppo
Did US Halt Insurgent Advance on Chemical Weapons Base?
Another Split Among Chechen Jihadists over Fight with ISIS