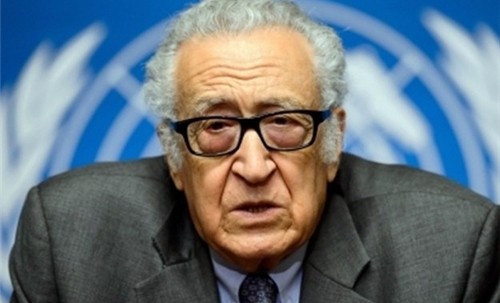 According to a “Western official”, United Nations mediator Lakhdar Brahimi bluntly told Russia last week that there is no point in further talks to resolve the Syrian crisis, unless President Assad’s representative do more than insult the opposition.

The official told Laura Rozen of Al-Monitor that Brahimi threatened to resign if Moscow did not get the Syrian regime to seriously negotiate.

The Russian diplomats had suggested another round of talks in Geneva, following the stalemate in two weeks of discussions in January and February.

When Brahimi asked, “What’s the point?”, given the attitude of the regime delegation, the Russians said they did not have as much influence over the Syrian regime as some observers think, according to the official.

The opposition insisted at Geneva that talks must agree on a transitional governing authority, with Assad stepping aside. The regime’s officials refused to any agenda with such a priority, insisting the first item must be how to deal with “terrorism” — their label for the Syrian insurgency.

Brahimi met with US Secretary of State John Kerry in Paris on Wednesday. No details were given of the discussion.

Kerry met with Russian Foreign Minister Sergei Lavrov yesterday, but the focus was the crisis in Ukraine.

State Department spokesperson Jen Psaki said, “I don’t want to speak to what (Brahimi’s) intentions may or may not be.”

Another US official was nonchalant about the development, “Yes, he has threatened to resign but that isn’t new. But I suspect he will persist.”

Syria Direct posts an overview of the insurgency’s attempt to take Aleppo Central Prison to free “hundreds, and possibly thousands, of anti-government activists and combatants, scores of whom may have already starved to death”.

The Free Syrian Army, Islamist factions, and foreign jihadists have blockaded the prison for months, occasionally launching incursions into the complex.

Airdrops to Supply Regime Forces in the Prison

Meanwhile, the insurgents are facing a regime offensive trying to reach its besieged troops in the prison, which is on an opposition-rebel supply route into northern Aleppo Province and border crossings into Turkey.

In recent weeks, Syrian forces have taken the northern Aleppo villages of a-Naqarrein and Sheikh Yusuf and are heavily shelling the town and industrial area of Sheikh Najjar, six kilometers east of the prison and a few kilometers north of Aleppo.

Insurgents have created a joint “operations room” with the Islamic Front, Jabhat a-Nusra, and Jaish al-Mujahideen, affiliated with the Free Syrian Army. Other militias, such as the Civilian Protection Body, are fighting alongside these groups.

The opposition forces say that, with reinforcements from the northern Aleppo suburbs, they have checked the regime advance. They claim they used Grad rockets to kill “Captain Suleiman”, the head of regime operations in the battle for Sheikh Najjar.

The Coalition’s Defense Minister Assaad Mustafa, blamed by commanders for the attempted firing of Idriss, has resigned and is being moved to another post.

Idriss’ future role is not clear, but he may remain as head of a “Joint Chiefs of Staff” with a consulting post closer to the Coalition’s interim Government.

Coalition head Ahmad Jarba is due to hold a press conference this afternoon.

Opposition fighters claim they killed at least 15 soldiers and destroyed three self-propelled howitzers. More Syrian material was lost in fires after the attack, while insurgents seized other weapons and supplies.

The insurgents then took another checkpoint, Tariq Aqeeb, east of Khan Shaikhoun — one of 10 overrun in two days.

A walk through one of the checkpoints:

On Wednesday, insurgents captured a regime post in the area.

Sources say the regime still holds a few checkpoints, but the largest is now isolated. Syrian forces are retaliating against the town with airstrikes and shelling from the Hama military airport.

A child is pulled from rubble after regime airstrike: