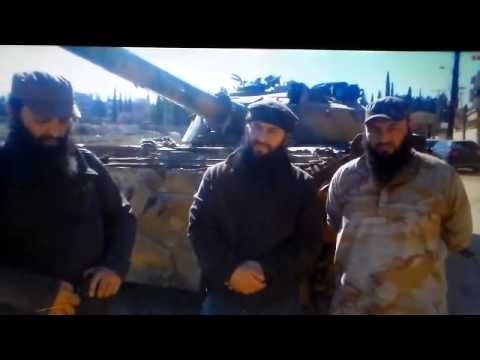 The Chechen-led faction is not aligned to any Syrian group, but considers itself part of the North Caucasus-based bloc the Caucasus Emirate (Imarat Kavkaz).

The faction’s leader Salahuddin Shishani and second-in-command Abdul Karim Krymsky have spoken out against the fighting between the Islamic State of Iraq and as-Sham and insurgent factions. Krymsky, a Crimean Tatar, has also been vocal in his condemnation of ISIS’s tactics and attitude toward the local population, saying that the group — led by former JMA commander Umar Shishani — have brutalized and murdered civilians, damaging relations between Syrians and foreign fighters.

JMA have stressed that the correct approach is to respect local groups and win over their hearts and minds while fighting the Assad regime and rather insurgents.

In the video, Krymsky talks about the importance of giving help to those who have suffered in Kafr Hamra.

The last part of the video shows footage of the storming of the town by JMA and Nuraddin az-Zinki.