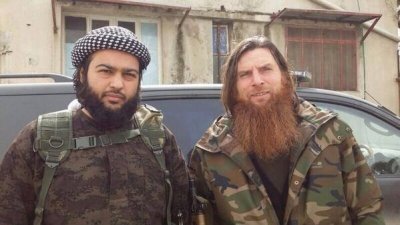 The faction is led by Amir Muslim Abu Walid Shishani, a seasoned fighter who fought alongside Arab foreign fighters in the North Caucasus and maintained close links with them.

He has maintained the independence of his jamaat, Jundu Sham. The group has previously fought in Lattakia Province, particularly last August when it captured several hilltop villages during an insurgent offensive.

In this video documenting the fighting against the regime in Aleppo and calling on men to join the group, Muslim is to the left of Sheikh Muhammad al-Mohaisany — supporter of the Islamic Front and other Islamist groups, critic of ISIS and key financier of insurgents in northern Syria.