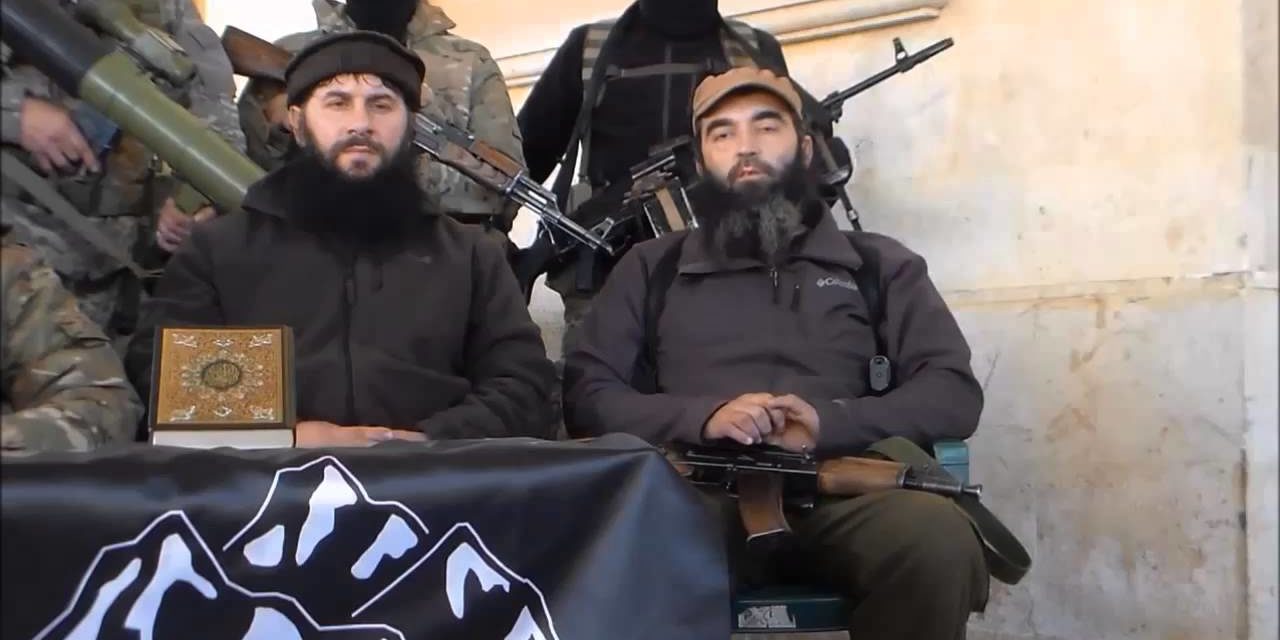 Salahuddin Shishani, the Amir of the jihadist faction Jaish al-Muhajireen wal-Ansar, has distributed a video address on the fighting between the Islamic State of Iraq and as-Sham and Syrian insurgents.

JMA is aligned with the Caucasus Emirate (Imarat Kavkaz). While it has not pledeged allegiance to any Syrian faction, but fights alongside groups such as Jabhat al-Nusra and Ahrar as-Sham.

Salahuddin is third from the left. To the right is his second-in-command, Abdul Karim Krymsky, a Crimean Tatar.

The commander’s most interesting claim is that some fighters who left the faction for ISIS have now started to return to JMA.

A large group of fighters left JMA in December when its leader, Umar Shishani, swore an oath to ISIS leader Abu Bakr al-Baghdadi.

Those fighters who had pledged allegiance to the Caucasus Emirate or who did not want to fight with ISIS stayed with JMA and Salahuddin took over as Amir.

According to Salahuddin, some of the returning fighters have brought their weapons.

Dear Brothers and Sisters, today we would like to clarify our position relating to the fitna in Sham.

We, JMA, from the very start, worked as far as possible to reconcile all the Islamic factions in order to prevent the bloodshed of our mujahideen.

Today the large factions, ISIS, Jabhat al Nusra, Ahrar as-Sham, Liwa Tawhid, these large factions because they fight each other, say about each other that the other one fights for America, that one for the Saudis, the others are hypocrites.

So today in Sham the jihad has stopped.

Several times we asked them that they united and fought the infidels, the very infidels that we came here to fight and to defend this people.

We have front lines on the northern part of Aleppo. All our fighters fight the infidels on the front line for JMA and recently we carried out an action in Kafr Hamra and thanks to Allah we took that territory and until now we have held the front line.

Our position is that we are trying to reconcile the brohters from the Islamic factions to stop their bloodshed on Sham….Why are we not leaving here? We are needed. If we leave here the infidels will occupy it and will continue to kill innocent people, our brothers and sisters in the Ansars.

So I call on everyone in the Islamic factions to leave what has been, make peace with each other, unite and fight together against the infidels.

I would like to clarify to you… regarding the rumors that we took from ISIS a tank and other weapons, these were given to our fighters who split from us and now they are returning to us…

That’s why during a fitna like right now the best position is to hold the front line against the infidels, and that is why I call on everyone to leave the fitna, and let the mujahideen following the orders of their Amirs, let them not shoot their brothers…

Salahuddin’s second in command, Abdul Karim Krymsky then says, “This is our address to you, connected with the fact that the fitna is continuing and simply that we are all suffering because of it.”

Krymsky complains that many Mujahideen are busy fighting each other rather than the infidels and calls on those involved to stop, reading works of scholars to see what they have to say on the subject.

Salahuddin then makes some more comments, including quotes from the Hadith.