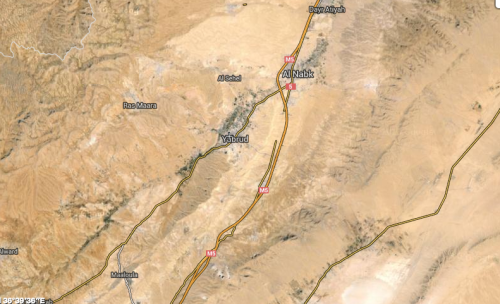 LATEST: Friday Protest: “Humanity Has Reached Mars, But Not Syria”

The sources said pro-Assad forces lost almost 50 fighters, with more than 100 wounded. Most of the casualties were Hezbollah.

The battle for Yabroud, the largest city in the Qalamoun region between Damascus and the Lebanese border, was also on the propaganda front on Thursday — the Syrian military and insurgents each claimed victory in a fight for the nearby area of Rima Farms.

President Assad’s forces, which launched the Qalamoun offensive in November, have been trying for almost a month to encircle and move into Yabroud, northeast of Damascus (see map).

A “military source” told State media that regime forces took over Rima Farms and two hills east of Yabroud.
However, the pro-opposition Local Coordination Committees said the Free Syrian Army and Islamist factions destroyed a regime tank and regained control over the areas, as fierce clashes continued on the northern side of the city.

EA correspondents also say that Rima Farms and the hilltops are held by insurgents. They point us to footage of opposition fighters near the Farms and the village of Sahel, which insurgents reclaimed after regime troops entered earlier this week:

The correspondents also write of heavy casualties among regime forces, with the military hospital in nearby Nabk overwhelmed and doctors and nurses exhausted. The correspondents say land mines and Improvised Explosive Devices have been effective against Syrian forces and Hezbollah, and tanks, bulldozers, and ammunition trucks have been taken out by rockets in the past week.

State media’s report on the battles:

Thousands of civilians have fled Yabroud for Lebanon as Syrian warplanes bombarded the city during the offensive. The Qalamoun Media Center said there were six air raids and three barrel bombs on Thursday — correspondent say casualties include insurgents and civilians.

Smoke over Yabroud from two barrel bomb on the main market on Friday — the extent of casualties is not yet known:

Video posted on Thursday claimed new shipments of Chinese-made “Red Arrow” guided anti-tank missiles to insurgents of the Mheen Brigade, before they moved to the front near Yabroud:

Friday Protest: “Humanity Has Reached Mars, But Not Syria” 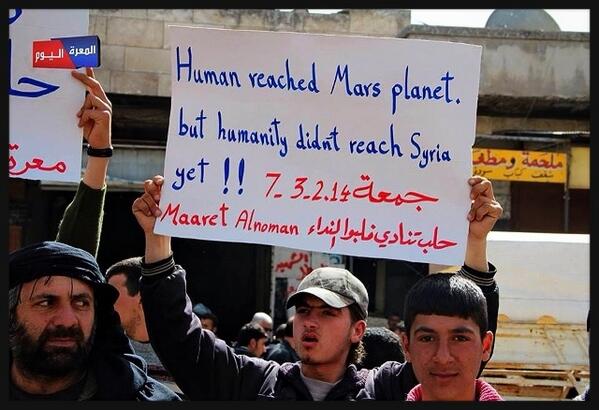 The first Friday Prayers since 2012 in the Great Umayyad Mosque in Aleppo:

The Mosque, severely damaged in October 2012, was retaken by regime forces in early 2013. Last April, its minaret was reduced to rubble by heavy weapons amid the ongoing fighting between Syrian troops and insurgents.

Meanwhile on Friday, destruction in Sekkari section of Aleppo from regime attacks:

Demonstrators in Kafranbel in northwest Syria have a message for counterparts in Ukraine as they face Russian occupation of the Crimea, “Don’t Rely on the International Community”: 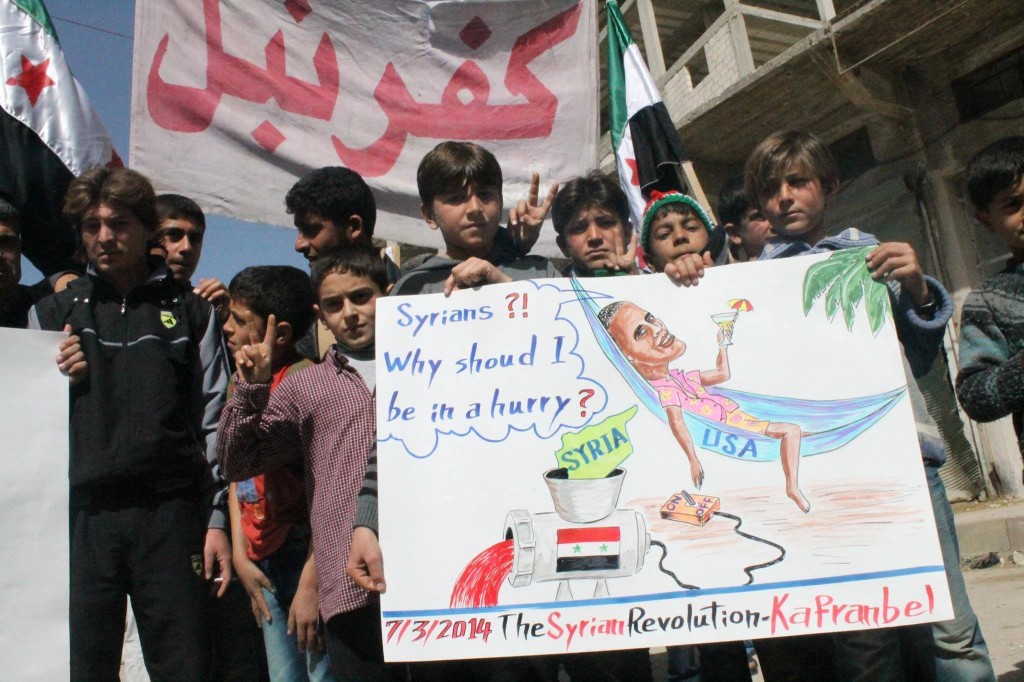 The Assad regime will miss a March 15 deadline to destroy 12 facilities in its chemical weapons program, according to sources at the Organisation for the Prohibition of Chemical Weapons.

Seven “hardened” aircraft hangars and five underground facilities were due to be dismantled.

Damascus agreed to the destruction and the facilities and the handover of all chemical weapons stocks last autumn, following the regime attacks near Damascus that killed hundreds of civilians on August 21.

However, the regime missed deadlines in December and February for the transfer of more than 90% of its stocks — 1,300 metric tons of toxic agents — to ships for destruction at sea, and is unlikely to meet a March 30 deadline.

Officials say only 25% of the toxins have been handed over.

Damascus has until June 30 to eliminate its chemical weapons program completely.

The opposition Syrian National Coalition announced Thursday that it resolved a dispute set off last month by its attempt to dismiss the head of its Supreme Military Council.

After a series of meetings in Istanbul, led by Coalition President Ahmad Jarba, the opposition said General Salim Idriss had accepted his replacement by General Abdel-Ilah Bashir.

Idriss will now be Jarba’s adviser on military affairs.

The General and 15 other commanders rejected the Coalition’s declaration in February that Idriss had been dismissed and threatened to leave the Supreme Military Council.

On Thursday, Defence Minister Assaad Mustafa, blamed for the firing, resigned. He may take up the post of Interior Minister in the Coalition’s provisional Government.

State Media: 17 Killed in Car Bombs in Homs and Hama

State news agency SANA claims that a car bomb killed 13 people and injured 30 in the al-Arman section of Homs on Thursday.

Another four people were killed and 22 wounded by a car bomb at the southern entrance of Hama.