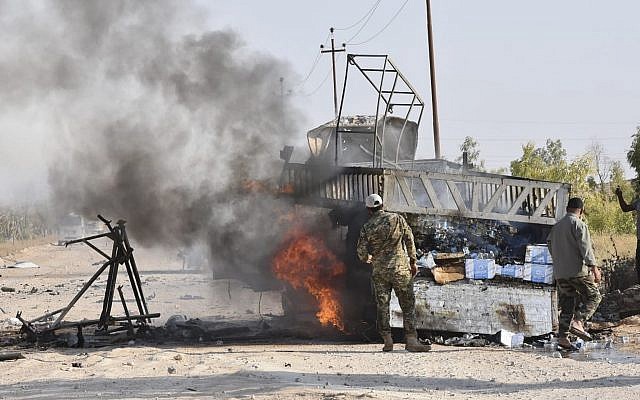 Popular Mobilization Forces personnel stand by a burning truck after a drone attack, blamed on Israel, in western Iraq near the Syria border, August 25, 2019 (AP)

Facing the latest deadly Israeli airstrikes on the positions of its allies in Syria, Russia claims the Assad regime did not fire on attacking jets because two civilian airliners were overhead.

The Syrian military leadership decided not to use air defense systems since at the time of the Israeli aviation attack, two civilian passenger aircraft were in the zone of destruction of the anti-aircraft systems.

Moscow and the Assad regime dismissed last week’s Israeli strikes, killing two troops on the T-4 airbase in Homs Province, with the unsupported declaration that eight of 12 missiles were downed.

An image from Wednesday’s strikes:

In its latest airstrikes on Assad regime and Iranian positions, Israel has reportedly killed or injured “several” Iran-supported militia in central Syria.

A statement by pro-Iranian militias, identifying themselves as the “Syria Allies Operations Room”, claimed the latest strikes were conducted through Jordan and the area of al-Tanf in eastern Syria near a US base. They vowed a “harsh response”.

The Israeli missiles supposedly struck the T-4 airbase in Homs Province. The nationality of the slain troops was not given.

The Syrian State ews agency SANA wrote, “At around 9:00 p.m., the Israeli enemy…fired a volley of missiles towards the T-4 military airport.” It acknowledged six injured soldiers and material damage.

The Israel Defense Forces followed their standard practice of no comment.

Israel has periodically struck the T-4 base, claiming it hosts Iranian personnel.

ORIGINAL ENTRY, SEPT 28: A base for Iran-backed militias in eastern Syria was bombed on Monday, according to residents and military sources.

The aircraft were unidentified, but the strike follows the pattern of Israeli attacks on positions and personnel supported by Iran, an essential ally of the Assad regime.

The sources said the latest bombing was south of the town of Mayadeen along the Euphrates River, a base for several militias in regime-held territory. Residents said militia fighters patrolled the streets on high alert, as ambulances rushed into the desert outskirts.

“Panicky militias were calling on pedestrians and cars to clear the city center and main streets around it,” Ahmad al-Shawi wrote by text.

Assad regime media did not report the strikes.

Israel has carried out hundreds of airstrikes against regime, Hezbollah, and Iranian targets since the Syrian uprising began in 2011. The aerial assault has escalated since April, amid a change in the Israeli Government from Prime Minister Benjamin Netanyahu to the current leader Naftali Bennett.

At the start of September, Israeli missiles targeted pro-Assad positions near Damascus.