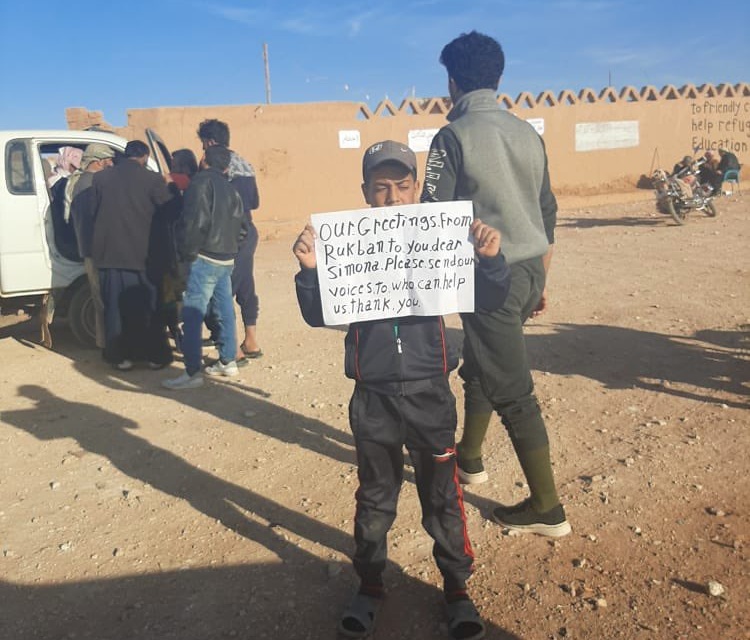 A displaced Syrian boy in the Rukban camp appeals, “Our greetings from Rukban. Please send our voices to those who can help us. Thank you.”

The Syrian American Council has appealed to the Biden Administration to help the residents of the Rukban camp “obtain life-saving humanitarian aid”.

[We] remind the Biden Administration that there is a chance to follow through on its trend of promoting global democracy and human rights by taking action in Syria and sending representatives from the United States to meet with the protestors. Any normalization of the Assad regime will undermine these efforts.

Children of al-Rukban camp make their voices heard for those concerned with the open sit-in in the camp and send their messages about being denied of their most basic rights to education and medical care#rukban #alrukban #syria #camps #refugees #jordan #jordanian #iraq #iraqi pic.twitter.com/nhvp93c1vg

Rukban camp representatives have reiterated, “We will continue our peaceful sit-in until our demands are met.”

In a video statement, the representatives emphasized that this is an opportunity for a positive story around the US presence in Syria, providing the humanitarian aid blocked by Russia and the Assad regime rather than facing the alternative of people dying of starvation beside a Coalition base.

US officials have still not responded. However, Robert Ford, the former US Ambassador to Syria, said there is an “opportunity for US Operation Inherent Resolve to demonstrate its stated concern for Syrian civilians by ensuring supplies for Rukban camp as winter approaches”.

Ford added, “US forces and their Syrian allies control the area around the camp — they are responsible under international humanitarian law.”

Activists supporting displaced Syrians say they contacted UK officials in autumn 2019 to seek help for residents of the Rukban camp.

The British officials said an offer to airlift aid into the area was not “appropriate”.

The activists said they were subsequently told by an American official that the US considering an airlift of aid from Kuwait into the zone around the US base at Tanf. It was reportedly supported by commanders in the region, but blocked by Pentagon leadership.

The senior officials said the effort was unsustainable, but the activists note more than 300 airdrops by the World Food Programme into Deir ez-Zor Province in 2016-2017.

ORIGINAL ENTRY: Displaced Syrians in the Rukban camp near the Jordanian border have staged a sit-in, protesting the ongoing lack of humanitarian aid.

About 13,000 residents remain in the camp, which once held about 75,000 people, after more than six years. They are continuing to resist forced transfer back to their home area in Homs Province, which they fled amid Islamic State attacks in 2015.

Russia and the Assad regime imposed a siege in autumn 2018, cutting off the main route to the camp. They have reinforced the blockade by hindering access UN access, with only three aid convoys in three years and the last one in September 2019. Moscow has also pursued propaganda and disinformation portraying US-backed “terrorists” in the camp.

The threat of starvation and lack of medical care was compounded in June 2016 when Jordan closed the border after an Islamic State bombing killed security personnel. In March 2020, amid the outbreak of the Coronavirus pandemic, the UN clinic on the Jordanian side of the border — the last possibility of effective medical care for Rukban — was closed.

Residents of the camp held signs on Sunday such as “We demand the international Coalition support the people of Rukban” and “Treatment is a right for children and women”.

Al #Rukban's residents are staging a sit-in today calling for urgently needed support.
Here is what they have to say in their 'last call to save us':
نطالب التحالف الدولي كسلطه امر واقع لدعم اهالي الركبان pic.twitter.com/gMCI4LUISN

The Failure to Protect Civilians

Rather than press for the restoration of assistance, the UN sent trucks in September to remove residents. Those in the camp continued to resist, citing the threat of interrogation, detention, and harassment by regime security forces if they go back to Homs.

Simone Jeger, a humanitarian activist who has helped arrange private assistance for the camp, said on Sunday:

The situation in Rukban is a metaphor for the UN’s and international community’s failure to protect or even provide essential humanitarian aid to a very vulnerable population.

As forgotten and neglected this place may be, no party can say they didn’t know. People have been calling on all of them but all they received was ignorance or empty promises at best.

There has been no comment from the Assad regime, Russia, the US, or the UN on the latest protest. A local source e-mailed on Saturday, “[US-led] Coalition forces were confused by this sit-in. They sent a plane today to film what is happening in the sit-in tent.”

A leader of the demonstration said on Sunday that if there is no response from the Americans, “The sit-in will be at the gate belonging to the coalition forces at al-Tanf base.”

Wonderful news from #Rukban: Urgently needed tarpaulins arrived for winterization! – Unlike the oversized @UNHCRinSYRIA logo would suggest, they were not donated but had previously been stolen from warehouses in regime-held #Syria, sold to smugglers and bought by the #refugees. pic.twitter.com/vkxiOyNoVG