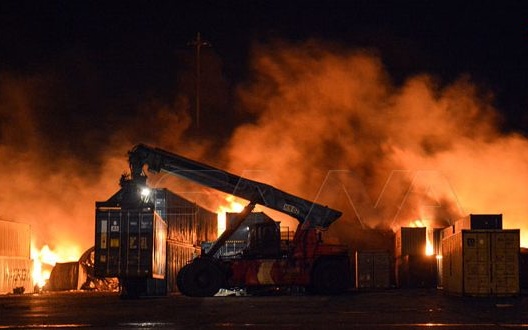 Journalist Elizabeth Tsurkov notes the widespread criticism of Russia, over its failure to challenge Israel’s attack on Latakia, by Syrians in Assad regime territory:

Following an Israeli strike on the Lattakia Port, which resulted in an hours-long fire, Syrians in regime areas are taking to social media to express their anger toward Russia for allowing the strike to happen. pic.twitter.com/ISyg0bkT2I

Israel has bombed the Syrian port of Latakia for the second time in three weeks.

Missiles caused large explosions and fires after the strikes at 3:21 a.m. Tuesday. An Assad military official said there was “massive material damage” in the container area of the port. Regime outlets also claimed damage to residential buildings, a hospital, shops, and tourist sites.

Moment of the Israeli strikes on Latakia port by Sham FM. Looks like weapon/ammunition shipment was targeted. pic.twitter.com/PZD844to6H

Israel had not attacked the port, on the eastern Mediterranean, until this morning because Russia’s main naval and air positions in Syria are nearby.

Moscow has taken no steps to limit the Israeli strikes across the country, which seek to restrict Iran’s supply of weapons and missiles to Lebanon’s Hezbollah and to put pressure on the Iranian military supporting the Assad regime. Claims have circulated that Russian leader Vladimir Putin, meeting Bennett on October 22, accepted Israeli attacks against Iranian targets.

The warplanes set the shipping containers on fire, with some reports claiming they were Iranian. Syrian State media reported five explosions and a large blaze.

Israel has regularly attacked during the 129-month Syrian conflict to prevent Iran transferring missiles, weapons, and equipment to its Lebanese ally Hezbollah, another essential backer of the Assad regime. However, the strikes on Latakia this morning are among the first on the key port on the Mediterranean.

Israel has stepped up its strikes, which also press for Iran’s military withdrawal and the prevention of an Iranian-Hezbollah presence in southwest Syria near the Israeli-occupied Golan Heights.

Tuesday’s attacks were the eighth in the past two months, including three in nine days. Most of the targets have been regime and Iranian bases and warehouses near Damascus and Homs.