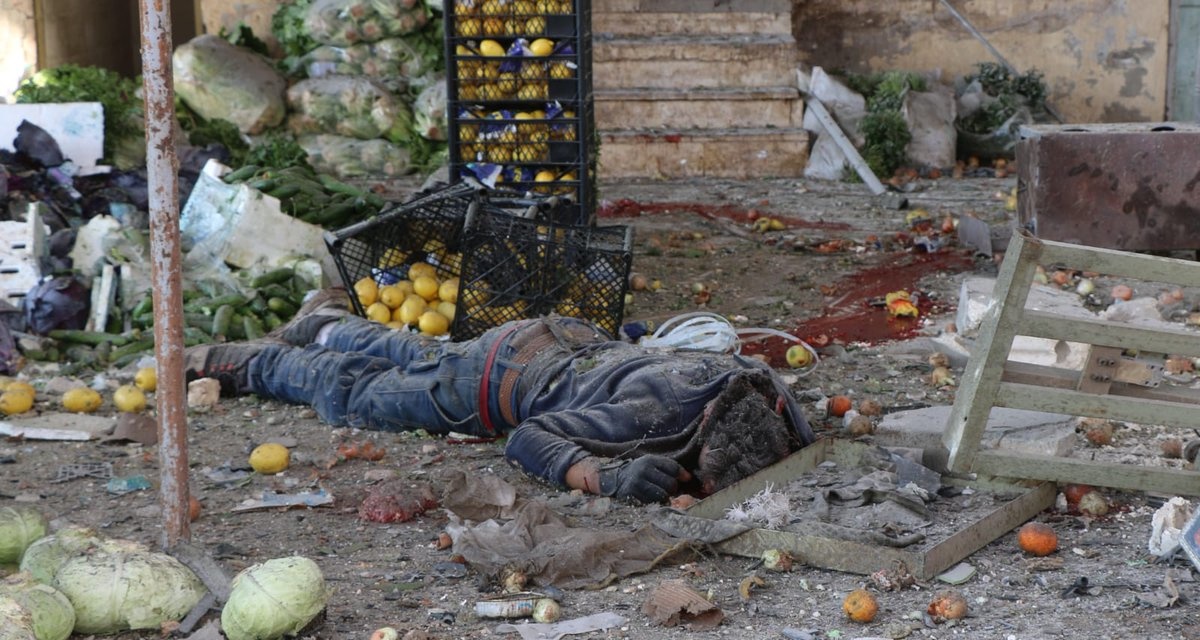 A victim lies among fruit and vegetables scattered by a pro-Assad bombing of Ma’arat al-Num’an in northwest Syria, December 2, 2019

Turkey has denounced the Assad regime over its mass killing of civilians in Idlib Province in northwest Syria.

But Ankara avoided criticism of Russia, which has also been involved in the attacks killing more than 1,000 civilians during a 7 1/2-month offensive and slaying scores in the past month, despite a declared “pause” by Russian President Vladimir Putin.

Tuesday’s editorial in Daily Sabah, close to the Erdoğan Government, summarized that the regime had killed “63 civilians, including 43 children, in its recent attacks targeting residential places” in Idlib in the past 10 days. The column explained that 86 civilian areas, including refugee camps, have been bombed.

The assaults have displaced more than 90,000 people, adding to the more than 400,000 who have fled since late April, raising Turkish fears that more Syrians will try to join the 3.6 million already in Turkey.

The UN says the greater Idlib area is home to 3 million Syrians, about 20% of the population remaining in the country after 104 months of conflict.

But while labeling the regime as “Russia-backed”, Daily Sabah avoided any mention of Moscow’s involvement in the airstrikes. Since the renewal of bombing last month, the attacks by both Russian and regime pilots have:

*Killed at least 21 people in five locations on December 7 and destroyed Kafranbel’s Radio Fresh, a symbol of peaceful opposition

*Bombed the Kiwan Hospital on November 24, the 66th attack on a medical facility since late April

*Killed at least 7 in bombing of Kafrumah on November 10

The Russia-regime offensive shattered a de-escalation zone for Idlib and neighboring northern Hama Province, declared by Turkish President Recep Tayyip Erdoğan and Putin in September 2018. The attacks seized almost all of northern Hama and part of southern Idlib.

Turkey tried to send a force to check the advance in Idlib, but it was blocked by Russian bombing of a highway. The offensive also surrounded Turkish observation posts, eventually forcing withdrawals.

But Ankara backed away from confrontation. Instead, Erdoğan turned his attention to Russian acquiescence to a cross-border offensive by Ankara and allied anti-Assad fighters into northeast Syria, across the Kurdish cantons of Kobani and Cezire.

Yet Another Round of Astana Talks

Rather than challenging Russia, Daily Sabah pointed to the latest talks between Turkey, Moscow, and Iran in the Kazazh capital Astana on Tuesday

The 14th round of discussions since January 2017 reportedly included evaluation of latest development and increasing humanitarian assistance to unspecified areas.

UN envoy Geir Pederson also reported on the opening of talks this autumn for a Constitutional Committee.

Purportedly seeking a political resolution of the conflict, the talks have been more important as a channel between Turkey — allied with some anti-Assad forces — and Moscow and Tehran, the essential backers propping up the regime.

Russia has used the political cover to enable regime takeovers of opposition territory, as well as the mass killing of civilians. The long-awaited opening of talks on the Constitutional Committee, first proposed in January 2018, have proposed no advance.