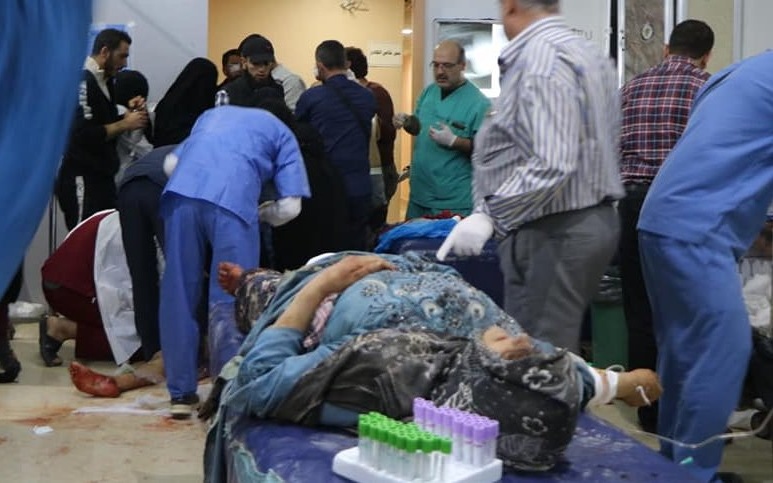 Medics treating victims of Russian-regime attacks on the village of of al-Sahharah in western Aleppo Province, northwest Syria, November 6, 2019

Last weekend the six-month Russian-regime offensive resumed airstrikes as well as shelling across southern Idlib and in and near the city of Jisr al-Shughour on the Turkish border. At least seven civilians, including two children, were killed and dozens wounded; a school and mosque were among the sites struck.

On Wednesday, shelling covered 80% of Jisr al-Shughour, activists said, including civil defense centers, a school, and a medical facility. Many civilians are reportedly fleeing, and the local council has declared a state of emergency.

The Syria Campaign said 24 villages were attacked on Tuesday and Wednesday with rockets and 70 artillery shells, while aerial raids killed three brothers from one family and injured their mother.

Russian-regime airstrikes targeted three more hospitals, among about 50 attacked since late April. Three medical workers were injured at the al-Ikhlas hospital for women and children, and patients were trapped in the Kafr Nabl hospital.

Our hospital in Kafr Nobol has been struck by 3 aerial attacks at 16:51 local time. The hospital is now nonoperational, and we currently have no communication with the staff, as they are trapped along with patients in the facility. #Syria #Savesyria pic.twitter.com/j6jri9PYOp

Painful scenes from the White Helmets search and rescue operations after the Russian raids that targeted the al-Sahharah village in western #Aleppo this afternoon. The death toll has risen to 7 dead and 25 injured. pic.twitter.com/Dmltun3mXZ

The offensive, launched in late April and shattering a Turkish-Russian “de-escalation zone”, has seized parts of southern Idlib and northern Hama Provinces. Putin declared the pause in early September, just before talks with Turkey, whose forces are alongside Syrian rebels in northwest Syria.

The discussions have led to an agreement with Turkish President Recep Tayyip Erdoğan on Russian-Turkish military control of northeast Syria, after Turkish-rebel operations seized Kurdish-held territory.

To these horrific scenes the people in the city of #JisralShughour western #Idlib woke up today. pic.twitter.com/42ezIWuZXy

Meanwhile, residents in the town of Kafr Takharim in northwest Idlib pushed back against the threat of the Islamist bloc Hay’at Tahrir al-Sham to occupy the area.

HTS holds much of Idlib Province after defeating rebel factions in 2017 and 2018. However, other parts remain outside its control, and residents have regularly protested against the bloc and the “Syrian Salvation Government” linked to it.

Video of the rally against the “storming of the city” by HTS.