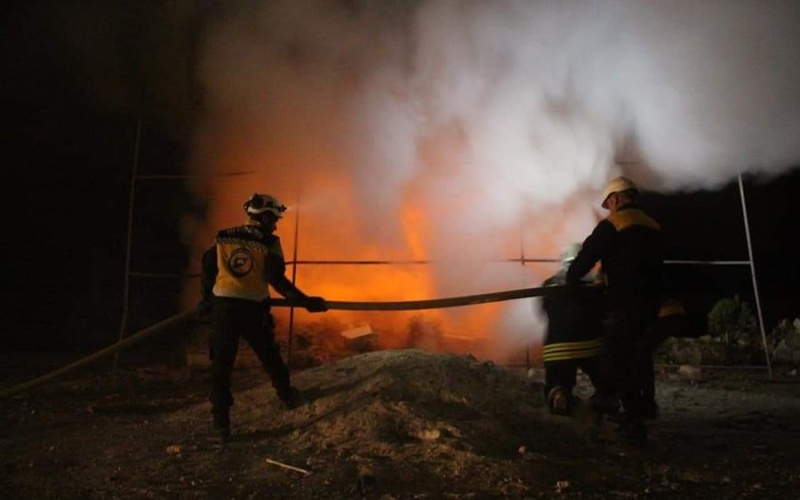 White Helmets civil defense fight a fire in Kiwan Hospital in Idlib Province, northwest Syria, after it was attacked by Russia’s warplanes, November 24, 2019

Russian warplanes have bombed yet another hospital in Idlib Province in northwest Syria.

The jets attacks about 9 pm on Sunday, striking Kiwan Hospital in Kansafra, southwest of Idlib city. Staff were evacuated after an alarm, ensuring there were no casualties, but the building was severely damaged.

The assault was the 66th on medical facilities in northwest Syria since a Russia-regime offensive being in late April. Some of the hospitals have been struck despite the handing of their coordinates to the Russian military, in an attempt to protect them.

Pro-Assad forces reportedly carried out more than 40 raids on Sunday across Idlib, which is home to about 3 million people — 20% of the remaining population of Syria after 104 months of conflict. Opposition-held territory in neighboring western Aleppo Province was also attacked.

Kiwan Hospital in Kinsafra town south of Idlib departed after a Russian airstrike targeted the hospital directly on Sunday evening, which resulted in huge destruction in the hospital and huge fires in the place.#syria#Idlib pic.twitter.com/0FNOzBURrM

There was a pulse and there was hope when the White Helmets rescued a wounded young man under the ruins of his home by Russian raids in Ma'arat al-Na'asan in #Idlib today. Sadly he died in hospital. Two other innocents were killed in this attack. pic.twitter.com/abArag1TUo

The offensive has seized almost all of northern Hama Province and part of southern Idlib. More than 1,000 civilians have been killed, thousands have been wounded, and more than 400,000 have been displaced.

Vladimir Putin declared a “pause” in military operations in early September, but Russia and the Assad regime have renewed bombing and shelling this month, killing dozens of civilians and wounding scores.

Last week at least 15 displaced Syrians, most of them children, were killed and more than 70 wounded by Russian missiles fired on a camp near the Turkish border.