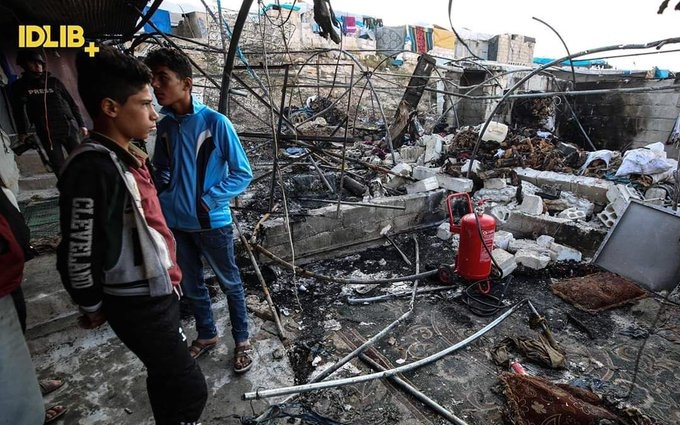 The devastation in the Qah camp for displaced persons in northwest Syria after an Assad regime bombing, November 21, 2019

At least 15 displaced Syrians have been killed and scores wounded by an Assad regime attack on a camp in Idlib Province in northwest Syria.

The White Helmets civil defense reported that ground-to-ground missiles — said to be Russian-made Tochkas — fired from a regime-held part of neighboring southern Aleppo Province struck the town of Qah, near the border with Turkey, on Wednesday night. Tents were set on fire as the displaced fled.

Many of the casualties are children. Regime shelling also hit the maternity hospital in Kah, damaging the facility and wounding staff.

Unconfirmed claims say the missiles were fired from a base with Iranian Quds Force personnel.

The UN says at least 48,000 people are in the Qah camp. Local activists say the number is much higher.

A cluster rocket attacked an hospital in Kaah town in Aleppo countryside.
was launched by Iranian militants in Jabal Azzan (Azzan mountain) which is the biggest Iranian military base in Syria.
There’s a lot of victims and most of them are children, with dozens of injured people. pic.twitter.com/dnVYKHks0d

This was how Russia and regime honoured Syrian children on #WorldChildrenDay by slamming rockets into their sad canvas tents in IDP camp in #Qah north of #Idlib. 12 people were killed and countless others injured. pic.twitter.com/dyCTCPiaIj

Since late April, Russia and the regime have waged an offensive to take over parts of Idlib and Hama Provinces in northwest Syria, the last major opposition-held territory. They have also been attacking opposition towns in western Aleppo Province.

The offensive has killed more than 1,000 civilians have been killed, wounded thousands, and displacing more than 400,000 of the estimated 3 million residents. At least 61 medical facilities, almost 100 schools, mosques, markets, and other infrastructure have been struck.

Russian President Vladimir Putin declared a “pause” in military operations in early September, after the offensive seized almost all of northern Hama and part of southern Idlib. But two weeks ago Russia and the regime resumed airstrikes, killing dozens of civilians and striking more hospitals.

The top UN officials for Syria have criticized the “scorched-earth policy” and detailed the “war crimes” of the offensive, criticizing the “failure of leadership by the world’s most powerful nations” with their “collective shrug”.

Earlier this week a UN report documented the strikes on 61 medical facilities, some of them hit several times, since April.

Another video of the victims of the shelling which targeted a camp for displaced families yesterday. Please look on the victims and their families. Who will have sanctions for this attack? Nobody. What will be do to protect the families? Nothing.
pic.twitter.com/eunS3HHA48