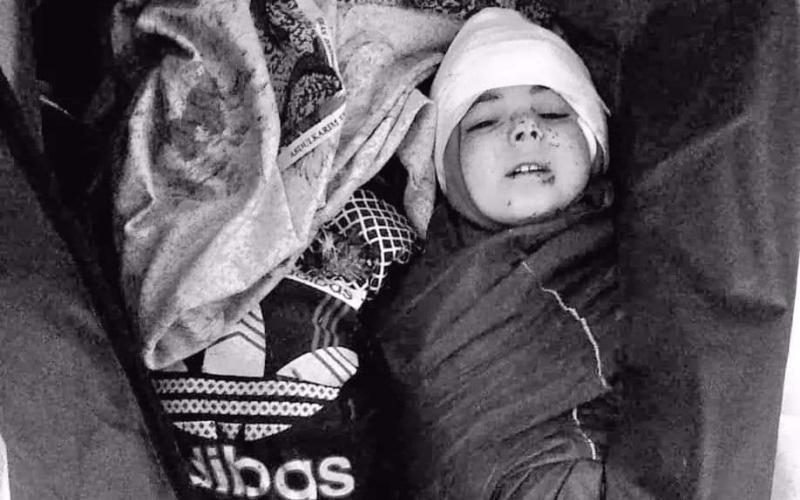 A young victim of Russia-regime bombing of Kafrumah in northwest Syria, November 10, 2019

In a Turkish-held city in northeast Syria, eight people were slain by a vehicle bomb.

The Russian-regime airstrikes and shelling were on the town of Kafrumah in southern Idlib. Videos showed a large explosion from one of the three aerial attacks, smoke rising from shelling, and a rescuer discovering his family among the victims.

Since late April, Russia and the regime have waged an offensive to take over parts of Idlib and Hama Provinces in northwest Syria, the last major opposition-held territory. More than 1,000 civilians have been killed, thousands wounded, and more than 400,000 of the estimated 3 million residents displaced. At least 61 medical facilities, almost 100 schools, mosques, markets, and other infrastructure has been struck.

In early September, Russian President Vladimir Putin declared a “pause” in military operations after the offensive took much of northern Hama Province and part of southern Idlib.

But last weekend the Russian-regime offensive were renewed across southern Idlib and in and near the city of Jisr al-Shughour on the Turkish border. At least seven civilians, including two children, were killed and dozens wounded; a school and mosque were among the sites struck.

Video showing one of the three Russian airstrikes that targeted #KafarRoma Town southern #Idlib this afternoon. 7 people including 3 children were killed, and 10 others were injured in the attack. pic.twitter.com/Svx4FkX1Uj

Eight people were killed by a vehicle bombing near the border town of Tel Abyad, taken from Kurdish control by a Turkish-rebel offensive last month.

The Turkish Defense Ministry said more than 20 people were wounded “by a booby-trapped vehicle”, blaming the explosion on the Kurdish militia YPG.

The attack was on the village of Suluk, about 10 km (6 miles) south of the Turkish-Syrian border. An emergency worker said a small truck exploded outside a bakery.

On November 2, at least 13 people were killed and 30 wounded when a “bomb-laden vehicle” was detonated in a market in Tel Abyad. Turkey and the YPG blamed each other for the attack.

Ankara considers the militia to be part of the Turkish Kurdish insurgency PKK, which has fought Ankara’s forces for 35 years. But the YPG is the largest element in the SDF, created by the US in October 2015 to remove the Islamic State from northeast Syria.