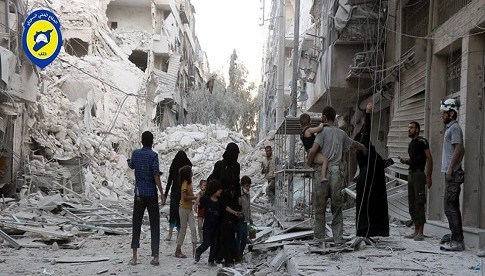 Audio Feature: A Witness Describes “Moment of Hell” Attack on UN Aid Convoy
Analysis: Obama — “It Haunts Me Constantly” (But I Won’t Do Anything)

A bomb lands near Bilal Abdul Kareem of On the Ground News as he interviews a White Helmets rescuer:

#OGN staff nearly killed while filming with #WhiteHelmets. Must see how life is in besieged #Aleppo pic.twitter.com/cTFSHFbZxm

3 of the 4 @SyriaCivilDef centers in Aleppo city targeted this morning. 60 air strikes in East Aleppo pic.twitter.com/g5seYilDbY

The latest of the numerous assaults on White Helmets centers and rescue operations, killing dozens of personnel, came hours after the organization was praised by US Secretary of State John Kerry:

When bombs explode in #Syria, the White Helmets are the brave 1st responders on the scene. Honored to meet their leader & #Aleppo activists.

Cluster munitions have reportedly been used.

Bombing is also reported of northern Homs Province, with four people killed, including three children, and 20 injured in the town of Rastan and village of Deir Ful village in attacks using vacuum missiles.

Digging through rubble in Aleppo:

A baby is rescued:

A baby is dug out of the rubble, alive, by @SyriaCivilDef, after Russian/Syrian airstrikes on #Aleppo last night pic.twitter.com/JVqD6Kxm8R

A mother and child are buried under a blanket: 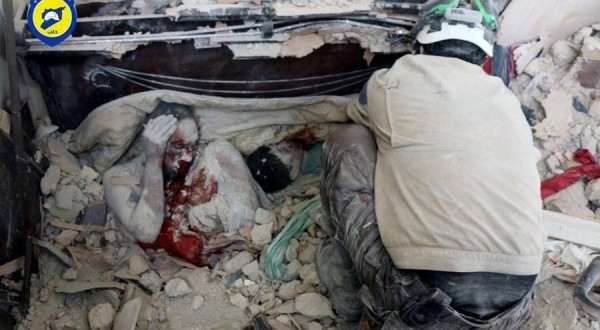 UPDATE 0845 GMT: Russia has tried yet another tactic to cover up its likely responsibility for Monday’s airstrikes on a UN aid convoy west of Aleppo.

On Thursday, Defense Ministry spokesman Igor Konashenkov said that “facts available…prove unambiguously” that a US Predator drone from Turkey’s Incirlik airbase was over the scene on the attack.

Konashenkov did not explicitly say that the US had launched missiles on the convoy, but his reference to the Predator, which has been used for strikes in Pakistan and Afghanistan, implied American responsibility.

There is no evidence that a US drone was present over the warehouses at Orem al-Kubra when — according to witnesses — five missiles were fired on the convoy, followed by barrel-bombing and strafing with gunfire.

Instead, Russian footage established that one of Moscow’s drone was carrying out surveillance. The Defense Ministry and Foreign Minister Sergei Lavrov insisted that the drone stopped its monitoring before the trucks arrived at the warehouses, but witnesses reported that a drone was over the scene for two hours before the airstrikes.

Since Monday, Russia has tried a series of explanations to avoid responsibility including that rebels carried out a ground assault, that the convoy was accompanied by an armed “terrorist” vehicle”, and even that the trucks spontaneously “caught fire”.

The UN’s head of humanitarian operations for Syria, Jan Egeland, said a convoy is ready to supply food to eastern Aleppo city on Friday, but it needs guarantees of security.

“The food expires on Monday,” he said. “We are ready to go to east Aleppo tomorrow, but we do not have enough assurances from the sides.”

Egeland said the likelihood of the convoy’s departure on Friday was small: “That would surprise me.”

During the seven-day ceasefire that ended Monday, the Assad regime blocked convoys from reaching Aleppo city. The UN trucks were bombed hours after the Syrian said that it was ending a “freeze on hostilities”.

ORIGINAL ENTRY: President Assad’s warplanes have carried out intense bombing of Syria’s largest city Aleppo for a second straight night, as the Syrian military declared an offensive to take over opposition-held areas.

Hamza al-Khatib, the director of a hospital in opposition-controlled eastern Aleppo, said 45 people were killed, with the Local Coordination Committee reporting the deaths of seven members of a single family.

Rebel officials and rescue workers said incendiary bombs were used in the attacks, the heaviest in months.

The Syrian military announced on Monday that it was ending a “freeze on hostilities” under a week-long ceasefire arranged by the US and Russia. Hours later, Russian SU-24 attack aircraft and regime helicopters attacked a UN aid convoy west of Aleppo.

“It’s as if the planes are trying to compensate for all the days they didn’t drop bombs” during the ceasefire, Ammar al-Selmo, the head of the civil defense rescue service in eastern Aleppo, said.

Syrian state media announced a new offensive and, quoting the army, urging civilians to flee areas where “terrorists” were located.
The army repeated the Russian-regime line from late July, as a siege was imposed on eastern Aleppo that “corridors” were ready for those who want to leave, including rebels.

Residents and activists say the corridors were never established.

No Progress in New York Meeting

Meeting in New York on Thursday, foreign ministers of the countries in the 23-nation International Syria Support Group said they failed to find a way back to a ceasefire.

But US Secretary of State John Kerry said he was willing to keep trying if Russia came back with new ideas: “I am no less determined today than I was yesterday but I am even more frustrated.”

On Wednesday, Kerry told the UN Security Council that Russian and regime military flights over humanitarian areas must be halted. However, the Assad regime immediately rejected the statement as a “breach of sovereignty”.

Lavrov implicitly dismissed the initiative in remarks after the meeting,

Nothing has happened and we will continue our consultations….

We will continue our work on the ceasefire, but certain details needs to be finalized. Some of our partners tried to make the Syrian authorities taking unilateral steps. We insist, however, that the opposition must take steps as well.

Thirteen people, including a minister in the opposition’s Interim Government, were killed and 30 injured on Thursday afternoon in a suicide bombing in Daraa Province in southern Syria.

The bomb struck a meeting of high-ranking opposition civilian, judicial and military authorities in the town of Inkhil.

Yaqoub al-Ammar, the former head of the Daraa Provincial Council and the Minister of Local Administration in the Interim Government was killed, as were the Inkhil chief of police and the head of the town’s rebel military council.

Reports varied on whether the blast was from a teenager wearing an explosive vest or a car bomb.

JKW is accused of a series of assassinations and attacks, including a suicide attack in early July in Inkhil that targeted the Free Syrian Army’s leadership. Eight people were killed.

Turkey’s Erdoğan: US is Airdropping Weapons to Kurdish Militia YPG

President Recep Tayyip Erdoğan said on Thursday that the US is airdropping weapons to the Kurdish militia YPG in northern Syria, but that American Vice President Joe Biden insisted he did not know about the operations.

Erdoğan said he told Biden about two planeloads of arms delivered to the YPG in the border town of Kobani, as the two men met on the sidelines of the UN General Assembly.

He claimed Biden responded by saying that he was unaware of the incident.

“I told him I am aware of it,” Erdoğan said.

The President said the US had sent weapons in the past to the YPG, the military branch of the Syrian Kurdish Democratic Party (PYD), and that half had ended up in the hands of the Islamic State.

Erdoğan’s statement follows a report in The New York Times on Thursday that the Obama Administration is considering a plan to send arms directly to the YPG, which Ankara considers a part of the “terrorist” Turkish Kurdish insurgency PKK.

The US has supported the YPG as part of the Syrian Democratic Forces, formed in autumn 2015 to fight the Islamic State, but has not publicly revealed direct shipments to the Kurdish militia.

Free Syrian Army factions have merged to form a Free Idlib Army for the defense of opposition-held Idlib Province in northwest Syria.

The factions include the Northern Division, Division 13, and the Suqour al-Jabal Brigade.

Captain Mohammad Al Bayosh, the Deputy Commander of the new Army, said the merger was the outcome of an “urgent need for unification” and regular army to protect civilians.

Other factions in northwest Syria, notably the large Islamist group Ahrar al-Sham, are in “unity” discussions which also include the jihadists of Jabhat al-Nusra, formerly Jabhat al-Nusra.