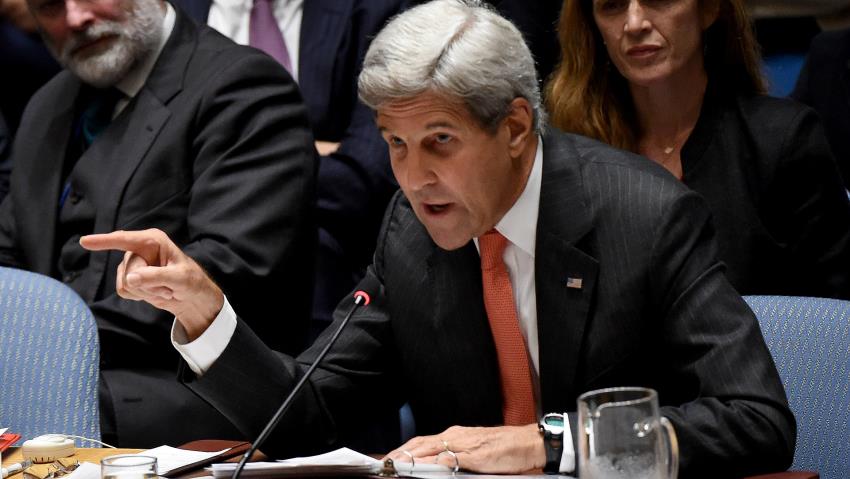 UPDATE 1600 GMT: President Assad has told the Associated Press that there is no siege of Aleppo:

UPDATE 0630 GMT: The opposition Syrian National Coalition has welcomed John Kerry’s statement for the grounding of military flights, but cautioned, “This won’t be achieved by deals with Russia, which has shown a consistent willingness to violate deals and to flagrantly violate international law.”

The Coalition appealed for a “no-bomb zone”for all of Syria, and putting “credible force back on the table” to deter the Assad regime.

ORIGINAL ENTRY: US Secretary of State John Kerry called on Wednesday for a grounding of Russian and regime warplanes over parts of Syria, two days after Russia apparently carried out strikes on a UN aid convoy.

Addressing the UN Security Council, Kerry said that the flights over zones of humanitarian need must be stopped in a last chance to salvage a ceasefire and find a way “out of the carnage”:

To restore credibility to the process we must move forward to try to immediately ground all aircraft flying in those key areas in order to de-escalate the situation and give a chance for humanitarian assistance to flow unimpeded.

The Secretary of State said Monday’s missile strikes and bombing — in which about 20 people were killed, including 12 Red Crescent personnel — raised “profound doubt whether Russia and the Assad regime can or will live up to” ceasefire obligations.

Kerry will chair a meeting of the 23-nation International Syria Support Group, where he is expected to repeat his call. However, the Assad regime has already issued a rejected, saying the halt to flights — and presumably bombing — would be a “breach of sovereignty”.

On Wednesday, the regime continued attacks, including one on Khan Sheikhoun in Idlib Province which killed at least 13 people. Activists also said that 15 personnel were killed in a strike on a medical center in Khan Tuman, west of Aleppo city.

The Local Coordination Committees documented the deaths of 89 people across Syria yesterday, including 52 in Aleppo Province and 23 in Idlib Province.

The Syrian military said that it struck seven areas near Aleppo.

Speaking before Kerry, Russian Foreign Minister Sergei Lavrov tried to fend off criticism: “One needs to refrain from emotional instincts, from rushing to the microphone immediately to comment on something; a probe should be conducted.”

Russia has put out various claims to divert responsibility. They include assertions that rebels attacked on the ground, that the convoy was accompanied by an armed “terrorist” vehicle, and even that the trucks suddenly “caught fire” with no damage from ammunition, let alone airstrikes.

However, US officials told journalists on Tuesday that they had intelligence establishing that two Su-24 strike aircraft were over the scene in western Aleppo Province at the time of the attacks. While both the Russian and Syrian air forces operate Su-24s, Deputy National Security Advisor Ben Rhodes said Russia carried the responsibility for the bombing.

Lavrov, perhaps unwittingly, bolstered Rhodes’ claim when he noted that regime warplanes do not fly at night, leaving Moscow’s forces as the only possible suspect.

Kerry’s statement was the public call by the US Government for a suspension of military flights in Syria’s 5 1/2-conflict, despite repeated appeals by activists and the Syrian opposition for action to end the bombing that has killed many tens of thousands of civilians.

In 2012, Secretary of State Hillary Clinton and CIA Director David Petraeus were among high-level US officials pressing for no-fly zones, but President Obama objected to the initiative.

In August 2013, following the Assad regime’s chemical attacks near Damascus that killed more than 1,400 people, Kerry led US public declarations for intervention. However, Obama suddenly pulled back, surprising almost all of his top advisors.

The shift in Washington’s stance on Wednesday followed the suspension of all aid activities by the UN and Red Crescent, after the bombing and the end of the seven-day ceasefire declared by the US and Russia.

The US had said that the truce must lead to aid deliveries to besieged areas; however, the Assad regime refused to allow any transport of assistance from Turkey to opposition areas in Syria’s largest city Aleppo.

On Monday afternoon, hours before the end of the seven-day period, the Syrian military announced it was renewing operations. Russia supported the message of an end to the “freeze of hostilities”.

Kerry said on Wednesday, “I emphasize this to Russia. The United States continues to believe there is a way forward that, although rocky and difficult and uncertain, can provide the most viable path out of the carnage.”

A group of rebels and their families have left the besieged al-Wa’er district in Homs, as a deal to remove civilians and fighters finally gets underway. 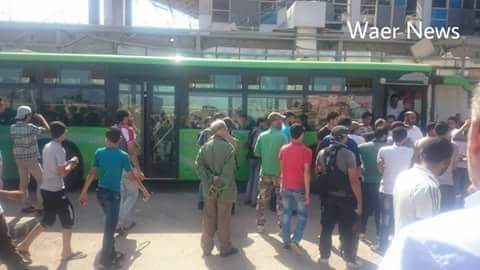 The removal was supposed to begin earlier this week, but was held up because of opposition concerns over the security of routes from al-Wa’er to opposition-held Idlib Province in northwest Syria.

The Assad regime has been trying to force the surrender of al-Wa’er, the last opposition area in Homs, since 2013. A deal was struck for a truce in December 2015, but the Syrian military has continued its siege and bombardment to try and force a capitulation of rebels and between 50,000 to 80,000 residents.