Syria Analysis: Obama — “It Haunts Me Constantly” (But I Won’t Do Anything) 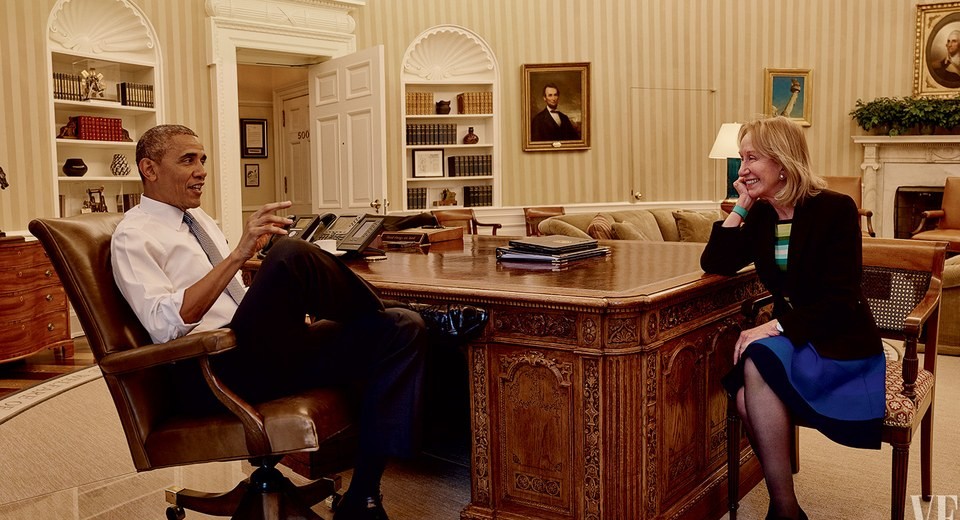 President Obama has used another “legacy” article, this time in Vanity Fair, to express his deep concern over Syria’s 5 1/2-year conflict — but to repeat that those who have advocated firm action to resolve the crisis “are wrong”.

In a fawning interview by historian Doris Kearns Goodwin, Obama is given the space to declare:

Syria…haunts me constantly. I would say of all the things that have happened during the course of my presidency the knowledge that you have hundreds of thousands of people who have been killed, millions who have been displaced, [makes me] ask myself what might I have done differently along the course of the last five, six years.

The conventional arguments about what could have been done are wrong. The notion that if we had provided some more modest arms to Syrian rebels — that somehow that would have led to [Syrian president Bashar al-] Assad’s overthrow more decisively. The notion that if I had taken a pinprick strike when the chemical-weapons issue [the Assad reigme’s killing of more than 1,400 people near Damascus in August 2013] came out, as opposed to negotiating and getting all those chemical weapons out — that that would have been decisive. All those things I tend to be skeptical about.

The President then turns the issue of the killings and displacement into one of his self-doubt:

But I do ask myself, Was there something that we hadn’t thought of? Was there some move that is beyond what was being presented to me that maybe a [UK Prime Minister Winston] Churchill could have seen, or a [US President Dwight] Eisenhower might have figured out? So that’s the kind of thing that tends to occupy me when I have the time to think about it — mainly because I think that in this job one of the things you realize is there are problems that just end up being really hard and by definition the only problems that come to my desk are the ones that nobody else can solve.

Usually, I’m pretty good about sorting through the options and then making decisions that I’m confident are the best decisions in that moment, given the information we have. But there are times where I think I wish I could have imagined a different level of insight.

Goodwin does not follow up. Instead, she asks — in a comparison of Obama with Franklin D. Roosevelt — “Was there ever a time, at the beginning of your Presidency, when you were haunted?”

Obama has used interviews throughout this year to try and set in stone his wisdom — despite his expression of long moments of reflection — against those who have urged him to intervene amid the bloodshed and destruction in Syria.

This spring, in a tougher discussion with Jeffrey Goldberg, he hailed his sudden U-turn at the end of August 2013, overruling his advisors’ plans for airstrikes and protected zones after the chemical attacks near Damascus.

I’m very proud of this moment.

And the fact that I was able to pull back from the immediate pressures and think through in my own mind what was in America’s interest, not only with respect to Syria but also with respect to our democracy, was as tough a decision as I’ve made — and I believe ultimately it was the right decision to make.

The President has replaced his confidence in the latest interview with the self-deprecating “if only I was as smart as Churchill or Eisenhower”, but the effect is the same. We wrote in May:

[This is] a dismissal not only of the Syrian conflict but, more importantly, of the people caught up in it, who paid with lives and a refugee’s subsistence because they had thoughts of rights and reforms.

And so, after his brief “haunts me closely” in this week’s discussion, there is no further reference to Syria. While Obama burnishes his legacy, the people and their lives have been erased.

A Letter to Replace Action

Well, not quite erased. An injured or damaged Syrian can still be of use — provided it is for the President’s image.

On the sidelines of the UN General Assembly this week, Obama read a letter by a boy from New York to Omran Daqneesh, the 5-year-old from Aleppo whose photograph — as he sat dazed and bloodied in an ambulance after a regime airstrike — raced around the world.

Syria Opinion: Omran’s Picture — “This Moment Must Become a Movement to End the War”

The White House records the boy, reading the letter aloud, for an attempted viral moment on social media. Obama emotionally recites the text.

Meanwhile, Omran’s brother has died of his wounds and his whereabouts and those of his family — also injured in the airstrike — are unknown.