Syria Analysis: Will Obama Step Up Weapons to Kurdish Militia? 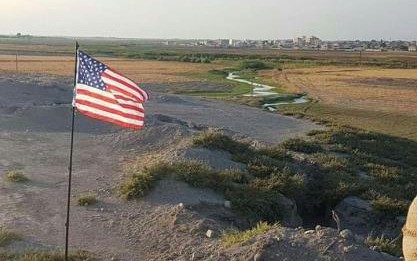 PHOTO: US special forces fly an American flag over Tal Abyad, held by a Kurdish-led force on the Syrian-Turkish border, last week

US officials have told The New York Times that the Obama administration is considering plan to step up weapons supplies to the Syrian Kurdish militia YPG.

The officials said the proposal stems from Obama’s directive to examine all possible proposals to accelerate the campaign against the Islamic State. Obama has told aides that he wants an offensive to remove the Islamic State from Raqqa, its central position in Syria, before he leaves office in January.

The escalation of weapons to the YPG is being considered even though Turkey considers the militia, overseen by the Kurdish Democratic Union Party (PYD), as a “terrorist” group linked to the Turkish Kurdish insurgency PKK.

Last month, Turkey launched an intervention with airstrikes, tanks, and special forces alongside rebels to take territory in northern Syria not only from ISIS but also from the Kurdish-led Syrian Democratic Forces. The offensive quickly secured a 55-km (34-mile) strip along the Turkish-Syrian border and moved south in Aleppo Province to the Sajur River.

The advance stopped short of a move on Manbij, the city that the SDF took from the Islamic State in late July. However, Turkish President Recep Tayyip Erdoğan has indicated that he wants control of a 100-km corridor from Azaz to Jarablus — taken from ISIS in late August — along the border and that the zone should extend 50 km to the south.

At the same time, Erdoğan has said that Turkey will not move unilaterally with rebels on Raqqa, instead looking to take the town of al-Bab, northeast of Aleppo city.

Plan Put Forward by US Military

The plan, under consideration by National Security Council staff, was developed by the US Central Command, which oversees American military operations in the Middle East. The YPG would be given small arms, ammunition, and some supplies, but no anti-tank or anti-aircraft weapons.

It is unclear how the proposal differs from existing US support for the YPG-led SDF, which was created in autumn 2015 to fight ISIS. The US has supplied weapons and special forces to the SDF as it advanced across northern Syria versus the Islamic State.

Instead, it appears that the initiative — and the leaking of it to the media — is a political move to reassure the PYD/YPG of US support, despite a Turkish-rebel offensive which has blocked any hopes of a unified Kurdistan across northern Syria.

The Turkish-rebel advance ensured separation between the Kurdish-controlled territory in northeast Syria and a Kurdish pocket, centered in Afrin, in the northwest.

The concern of the PYD and YPG was further raised by initial US support of Turkey’s demand that Kurdish forces withdraw east of the Euphrates River, thus giving up gains such as Manbij. Washington later played down the condition and appeared to encourage a halt to the southward advance of the Turkish-rebel force.

Asked if the Turkish intervention had slowed the quest to recapture Raqqa, Gen. Joseph L. Votel, the head of Central Command, acknowledged the possibility: “We don’t necessarily control the timeline ourselves.”

He declared, “We have to play a leadership role on both sides [Turkey and the PYD/YPG] and keep focus on the mission to defeat ISIS.”

The US officials said the proposal has not yet been presented at the Administration’s highest levels. The White House declined to comment.

However, the officials said the aid would try to assuage the “hard feelings” that Syrian Kurds have felt towards the US since the Turkish-rebel advance.

Last week, US special forces raised American flags over the SDF-held Tal Abyad on the Turkish border. Initial reports said the YPG were responsible, in a message to the Turks, but US officers acknowledged earlier this week that their troops made the symbolic move.