Week Past, Week Ahead: Syria — Competing Offensives as Saudis Talk to Obama 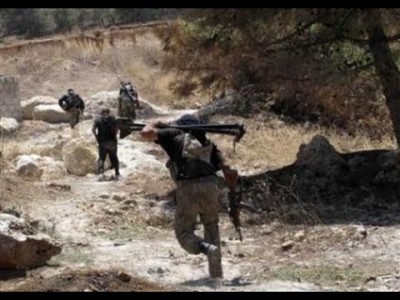 Insurgents continued to strike back after recent regime gains between Damascus and the Lebanese border, advancing in their offensive in Latakia Province in western Syria.

While the gains so far are a few villages and the regime’s last border post with Turkey, the opposition fighters have won a psychological victory with the pushback against narratives that “Assad is Winning”. The Syrian regime betrayed its concern with days of verbal assaults on Turkey for its support of the “terrorist” offensive.

Outside Syria, President Obama made a high-profile trip to Saudi Arabia, including a two-hour discussion with King Abdullah. The Americans tried to hold the line of mutual support for a political transition in Syria and support of “moderate” opposition. The Saudis were more forthcoming as they tried to pressure the US into steps beyond rhetoric — they said Obama promised to “dramatically expand America’s covert program of assistance” as the King “stressed his desire to see Washington rise to the occasion”.

Another foreign leader set out his reasons for intervention in Syria: Hezbollah’s Sayyed Hassan Nasrallah declared, “If takfiris achieve victory in Syria, we would all be eliminated in Lebanon, not just the resistance.”

And a leaked audio tape exposed Turkey’s top political, intelligence, and military officials in a discussion of military intervention, using the justification of a threat to the tomb of Suleyman Shah, grandfather of the founder of the Ottoman Empire.

The humanitarian crisis continued throughout the country, despite limited success with provision of aid by the UN, including the Damascus suburbs.

The insurgency’s Latakia offensive will not bring a decisive shift in the conflict, but it has checked the overblown declarations of an Assad advance to victory, following the capture of Yabroud last month.

Overall, the competing offensives have reinforced the scenario of a grinding stalemate, with each side gaining in areas where it has strength but unable to check the forces of the enemy elsewhere.

The immediate political effect of the insurgent gains this week has been a denting of the regime’s propaganda march to “legitimacy” through a Presidential election this spring.

Meanwhile, fencing over chemical weapons and aid will continue, with Assad’s officials insisting that any problems are due to the “terrorists” — even as they continue to restrict assistance to insurgent-held areas.

“US Expanding Aid to Insurgents” — Reality or Propaganda for Obama’s Saudi Visit?
Video Analysis: Is This A Game-Changing Insurgent Offensive in Latakia?
Op-Ed: How the US Blames the Opposition
Video Analysis: No One is “Winning” The War
How Russian Propaganda Puts Aid Workers in Danger

The Siege of Damascus Suburb of Douma
Insurgency’s Latakia Offensive — 9 Questions and Answers
Uneasy Truces Around Damascus — “Reconciliation Has Made Us Worse Off”
Video: Children Explain Why They Eat from Streets in Damascus
Videos: The Insurgents’ Latakia Offensive
Human Rights Watch — Regime Air Attacks Terrorize Aleppo & Kill 2,400 Civilians Since November