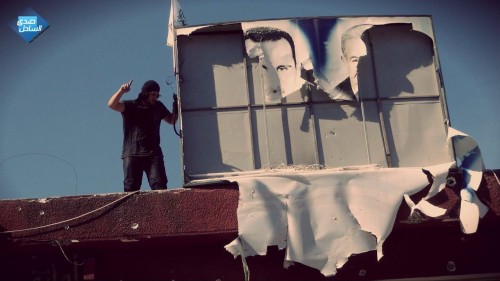 Q: Why did the battle for the coast start now?

Preparations for the battle have been underway for about seven months; rebels have been surveying military conditions and stockpiling ammunition. The battle will ease pressures on a number of other fronts; a government caravan of 25 trucks recently left Idlib and Ariha, and there’s news…of another regime military convoy leaving Aleppo toward Latakia, but we haven’t confirmed that.

Q: What is the regime doing to protect Alawite communities, and the coast more generally?

During the last battle in Latakia, in August 2013, the regime called up reinforcements from Idlib, Hama and Homs in addition to its forces already present in Latakia and Tartous. Many shabiha and Alawite fighters left Damascus and other areas and returned to Latakia to defend their villages; the regime also set aside four warplanes for operations over Latakia alone.

That’s double what is in Aleppo, which only has two planes. We expect the same thing will happen during this battle, although the situation with the planes will differ because of how close the battle is to Turkish airspace. There’s also news of Hezbollah participation in this battle, but we haven’t seen tangible proof yet.

Q: What challenges do the rebels face fighting in this area?

The battle for the coast is among the most complex battles in Syria. There’s very little support for rebel battalions, which has made every bullet precious, so you’re finding many factions that prefer not to enter the fighting without a clear plan to replenish all types of ammunition.

ISIS (the Islamic State of Iraq and as-Sham) also played a role in stopping the battle on two consecutive occasions before withdrawing from Outer Latakia.

Q: You mentioned pressure from opposition politicians to stop the battle for the coast. What more can you tell us about that?

Some members of the Syrian National Coalition prefer to keep the coastal region calm, on the pretext of wanting to protect minorities there from the Free Syrian Army and other opposition brigades. This has been clearly reflected in the level of support going to this area. As for ISIS (the Islamic State of Iraq and as-Sham), they refused to take an active role on this front in previous battles, and actually attempted to assassinate military leaders involved in preparing for the battle.

Q: Who are the most important armed groups fighting in Latakia?

There are four main factions waging the “Anfal” campaign. Two are the Islamic Front’s Ansar as-Sham and Ahrar al-Sham, the first of which is leading the campaign. Then there are the independent factions Jabhat a-Nusra and Sham al-Islam. These are the principal factions fighting in the campaign.

Q: What are the military achievements the opposition forces were able to achieve and what are the goals they are aiming for on the ground?

The last Turkish border crossing liberated was the Kasab crossing, as well as Kasab city and the a-Samara area, the first port in the hands of the opposition. Tower 45 was liberated, which is the highest point on Jebel Turkman. It has a military base, making it one of the most important achievements as of now.

The first stage of the Anfal battle achieved its goals successfully, and we are waiting for the announcement of the second stage.

Q: What is the importance of coast battle on Syria level?

The regime won’t fall unless Damascus and the coast fall.  Any other battle won’t affect it the way that the coastal battle will; losing Deir e-Zor or Raqqa is like losing a single Alawite village. Firing a single bullet against regime forces on the coast is like ten bullets anywhere else, because the coastal battle will make the regime lose supporters from its own sect. Meanwhile, opening the battle for the coast will ease pressure on a number of other areas in Syria.

Q: Do you expect this battle to be short-lived, as a way to exercise pressure on the regime, or is this a major new front in the conflict?

We hope the campaign will continue until we liberate Latakia, and especially Qardaha [Syrian President Bashar al-Assad’s birthplace].

Q: What is the importance of Qardaha and why do rebels target it?

The goal is Latakia generally, and not Qardaha, to liberate it from the Assad regime. The rebels are targeting Qardaha to symbolically bring down (the home of) Hafez al-Assad.

Q: Are there sectarian motives? If the rebels took Qardaha, would there be a massacre?

There is no sectarian malice, but (Latakia) represents a symbol of the Assad family. It can be likened to when rebels in Libya entered Qaddafi’s city. We believe Bashar will flee to Latakia before he falls, to Qardaha. Therefore, liberating Qardaha means ending Assad’s symbolic [power] over the place. As far as massacres, no massacres will happen.