Syria: Uneasy Truces Around Damascus — “Reconciliation Has Made Us Worse Off” 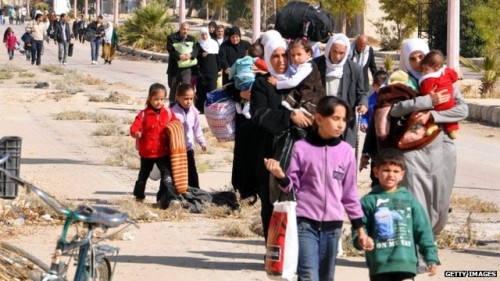 Since the end of 2013, the Assad regime has been pursuing a strategy of local ceasefires in insurgent-held suburbs of Damascus. In return for promises that insurgents will lay down arms and for flying the regime flag, residents will be allowed some relief from months-long sieges that have cut off food and supplies. The regime calls the approach “reconciliation”; activists and the opposition say it is a “surrender-or-starve” tactic.

Sam Dagher of The Wall Street Journal has toured the suburb of Moadamiya, where residents were besieged for months to the point of starvation. He paints a mixed picture of the political situation and the conditions for civilians.

Dagher portrays the resignation that led to the ceasefires — “We were ready to cling on to anything to get food for us and the children”, says one former protester in Moadamiya:

Natives speak in hushed tones about some women in Damascus and neighboring Lebanon who begged town elders and rebel leaders to accept the government’s truce terms. Some had been forced to work as prostitutes just to feed their children, they say.

The center of Moadamiya is nominally held by the opposition, including some of the disarmed insurgents, while Syrian forces are in the northern and eastern sections. Residents are allowed out of the suburb to bring back food and medicine, after searches at checkpoints.

Dagher’s overriding message is ominous, as he speaks with regime officials who anticipate renewed fighting:

“We have reservations; we do not see it as reconciliation, just a cessation of hostilities as weapons remain with both sides,” says an official with the Ministry of Reconciliation Affairs….”And if the reconciliation process is incomplete then this is a time bomb that will take us back to square one.”

The reporter notes the breakdown of agreements in Al Hameh and Qudsaya. In Babbila — scene of a photo-opportunity last month where insurgents and Syrian troops greeted each other warmly — the blockade was reinstated after mortars were fired at regime checkpoints. In Barzeh, a collapse of the truce was averted by the release of 36 detainees.

And then there are the individual stories:

A Shiite Barzeh resident now displaced elsewhere in Damascus says her home is now occupied by Sunnis from the district who lost their home in the war and that all her personal belongings were thrown away.

“Everything is gone, the reconciliation has made us worse off,” she says.