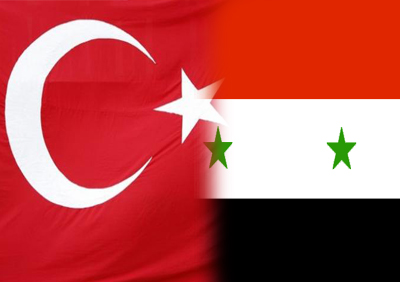 A leaked audio on Thursday revealed that Turkey is considering military intervention in Syria if the Islamic State of Iraq and as-Sham attacks the tomb of Suleyman Shah, grandfather of the founder of the Ottoman Empire, in Aleppo Province.

However, the focus on the story obscures an important development: Ankara has already stepped up its support of the Syrian insurgency.

The clue lies in another important development this week, the insurgent offensive in Latakia Province in western Syria.

Claims that thousands of opposition fighters poured across the border from Turkey into Latakia are unfounded. Far more likely are the movement of supplies for the offensive and assistance with intelligence on Syrian forces. Then there is the Turkish downing of a Syrian warplane, which was in Turkey’s airspace for some time, at the start of the offensive.

That raises an interesting question, two days before local elections in Turkey. Who is backing the support of the insurgency, in an operation that appears to have been long-planned?

And would an ISIS attack on Suleyman Shah’s tomb in Aleppo Province be a convenient development to escalate that support into direct Turkish intervention in northern Syria?

Kurds Claim Killing of More Than 60 ISIS Fighters Near Kobanê

A Kurdish website claims that the Kurdish militia YPG has killed more than 60 fighters of the Islamic State of Iraq and as-Sham in northeast Syria in the past week.

The groups have been fighting for days for control of territory near Kobanê, which has been under attack for more than three weeks. ISIS is hoping to cut off the canton from the Afrin and Cizirê areas to the west and east and from Aleppo to the south.

The YPG claims that it has slain more than 200 ISIS fighters since early March.

Insurgents say they have killed dozens of shabiha as they shelled the village of al-Fu’ah near Binnish.

Insurgents say they have repelled regime counter-attacks on their attacks in Lattakia Province in western Syria. They say they inflicted casualties on Syrian forces near the village of Nab’ain, taken by insurgents on Thursday, and they struck a convoy of reinforcements.

Bodies of Syrian forces in a house (Warning — Graphic):

Video of bodies of Assad fighters in a pick-up truck has also been posted.

Friday’s protest in Kafranbel in northwest Syria, known for its posters, has a message for the international community: 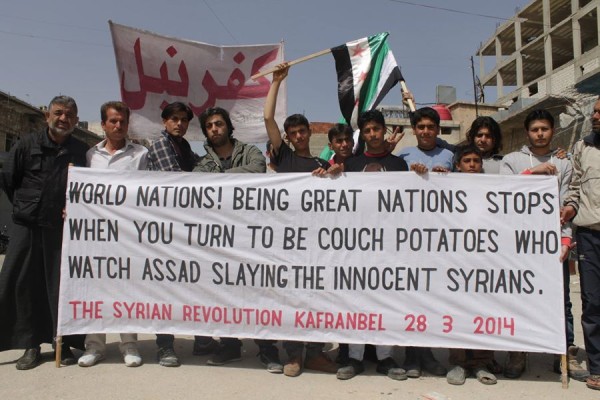 Syria’s Ambassador to the United Nations, Bashar al-Jafari has claimed again that the “Turkish army is covering the terrorist operations of the armed groups in (the) Kasab area in the coastal province of Lattakia”.

Al-Jafari said he had sent letters to UN Secretary-General Ban Ki-Moon and the President of the Security Council about “the dangerous violations committed by Turkey” as well as Israeli “terrorism” through bombing of Syrian targets and support of insurgent movements.

The Ambassador said he also phoned senior officials at the UN General Assembly and met with UN Deputy Secretary-General Jan Eliasson on Monday and Tuesday.

This is State news agency SANA’s sole, confusing comment this morning on insurgent advances in Latakia Province: “A military source said that the army units killed and injured scores of terrorists in Beit Shrouq and in 669-587 points in the northern countryside of Lattakia.”

However, there is an implicit admission of the opposition’s victory in Kassab village, near the Turkish border, in the report of a visit to President Assad by his Armenian counterpart Samvel Farmanyan:

(Farmanyan) expressed on his and his people’s behalf condemnation of terrorist groups attacks backed by Turkey against Kassab city in Lattakia countryside….

Te Armenian parliamentarians affirmed their full support for (Syria’s) efforts to secure the return of people who have been displaced from Kassab and other areas to their houses and home villages.