Syria 1st-Hand: The Siege of Damascus Suburb of Douma 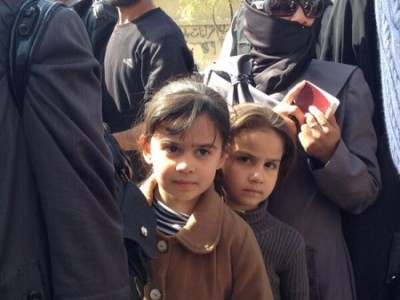 Lindsay Hilsum of Britain’s Channel 4 has been in the besieged Damascus suburb of Douma — one of the first foreign journalists allowed in the area since September 2012:

Hilsum, who accompanied the second UN aid mission to reach Douma in 18 months, posted a series of photographs on Twitter:

As we were leaving #Douma today people banged on the car windows desperate to leave too.. But they're trapped. #syria pic.twitter.com/ETkr6YJhC4

An FSA fighter in #Douma. They say they won't surrender but in other suburbs they have done. #syria pic.twitter.com/w9xfyhNoCi

We saw this Jabat al Nusra car and jihadi fighters in #Douma today. FSA said they have no problem with them. #Syria pic.twitter.com/s18VRzYaFU

An extract from Hilsum’s report:

A young man asked if we wanted to interview the local FSA commander so we went to meet Ahmad Taha, a middle-aged man with a grey beard, wearing fatigues.

He was, he said, commmander of the “martyrs brigade”, and there had been many marytrs in Douma.

In other suburbs, worn down by hunger and lack of outside support, opposition fighters have started to surrender under what the government calls the “reconciliation programme.” If they agree to join the Syrian army, or lay down their weapons, they will not be detained.

“We will never do that!” said Mr Taha, eyes flashing. “A ceasefire or reconciiation is out of the question. Bashar (al-Assad) has killed our kids and wives and destroyed our houses.”…

A few miles on, at the village of Misraba, they unloaded more food parcels as several hundred people queued – men in one line, women in the other – with their ration books. I asked some of the women, their faces completely covered with black cloth, what they thought about the rebels’ refusal to surrender.

“We want both sides to surrender,” said one. “We want our old lives back.”