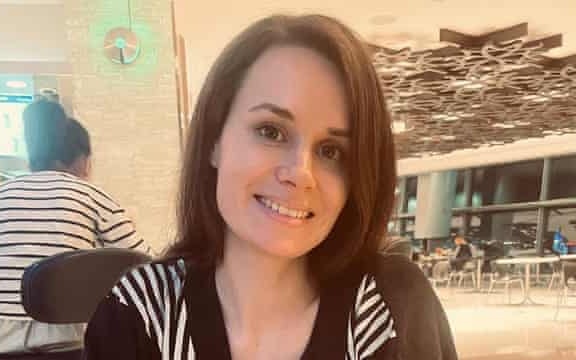 Kylie Moore-Gilbert at Doha Airport, en route to Australia from Iran after her release from prison in November 2020

Australian academic Dr. Kylie Moore-Gilbert, a political prisoner in Iran for two years, has posted a video to highlight those still detained in the Islamic Republic.

On the first anniversary of her release in a prisoner exchange, Moore-Gilbert says in Persian:

This anniversary is full of emotion for me. I can’t believe my imprisonment was not a nightmare, but real.

I thank God every day that I am here, in a place that’s calm and peaceful, and respects my human rights. But I’ll never forget that in many countries of the world, this peace and freedom don’t exist.

The dear, kind people of Iran are still suffering. They are not free yet. The future of thousands of Iranian political prisoners is bleak. My dear friends [from] prison are never far from my thoughts. While they remain in prison, my heart and mind are there with them.

“How can I live a free life,” Moore-Gilbert asks, “when a part of my heart is still there?”

The Islamic Studies specialist had never studied Persian but learned it in Evin and Qarchak prisons.

Australian academic Kylie Moore-Gilbert (pictured) has again thanked supporters after her release from 26 months in an Iranian prison.

Moore-Gilbert, swapped for three Iranians detained over an assassination plot in Thailand, wrote through the Twitter account of a support group: “I honestly do not know where to start or how I can ever thank you for all of your incredible efforts to campaign for my release.”

and hadn't forgotten me, it gave me so much hope and strength to endure what had seemed like a never-ending, unrelenting nightmare. My freedom truly is your victory. From the bottom of my heart, thank you!

She concluded, “My freedom truly is your victory. From the bottom of my heart, thank you!”

Moore-Gilbert arrived in Canberra late Friday and is now in a mandatory Coronavirus quarantine.

Kylie Moore-Gilbert has thanked supporters after her release from 26 months of detention in Iran.

“Thank you to all of you who have supported me and campaigned for my freedom,” she said, in a statement released through Australia’s Department of Foreign Affairs and Trade. “I came to Iran as a friend and with friendly intentions and depart Iran with those sentiments not only still intact, but strengthened.”

We are over the moon that our amazing friend and colleague Dr Kylie Moore-Gilbert is on her way home after 804 days in prison in Iran. An innocent woman is finally free. Today is a very bright day in Australia indeed! 1/

ORIGINAL ENTRY, NOV. 25: Iran has freed Australian academic Kylie Moore-Gilbert, detained for more than two years, in an exchange for three Iranians imprisoned in Thailand for an alleged assassination plot.

Moore-Gilbert was shown by State TV in an airport or hotel lounge before being escorted with a companion to a van.

Meanwhile, the three Iranian men, with national flags across their shoulders, were greeted by Deputy Foreign Minister Abbas Araqchi.

Moore-Gilbert, a lecturer in Islamic Studies at the University of Melbourne, was seized in September 2018 while visiting Iran to take part in a university program on Islam for foreign academics. She was given a 10-year sentence for “espionage”.

She was denied furlough this spring, even as many prisoners were temporarily freed because of the Coronavirus pandemic. In July, she was transferred to Qarchak Prison, infamous for its poor conditions.

The measures appeared to be punishment for a hunger strike last December, alongside French academic Fariba Adelkhah, to protest the imprisonment of political detainees. She wrote in January, in letters smuggled out of prison, that she endured 10 months in solitary confinement which “gravely damaged” her health. She said she was offered a reduced sentence if she agreed to spy for the Revolutionary Guards.

Moore-Gilbert met the head of Iran’s prisons organisation, Mohammad Mehdi Haj-Mohammadi, and the Secretary of the Iranian high council for human rights, Ali Bagheri-Kani, about her imprisonment.

In an easing of the pressure on her, Haj-Mohammadi told staff they should fix issues at Qarchak: “We understand that a prisoner is a criminal before entering the prison, but after entering the prison, we consider them a needy, capable person deserving of correction and assistance.”

The academic was transferred back to Tehran’s Evin Prison in September.

Two of the freed Iranian men were convicted in Thailand in 2012 of involvement in an attempt to assassinate Israeli diplomats in Bangkok. Saeid Moradi lost his legs when a bomb which he tried to throw at police detonated at his feet. Mohammad Kharzei was jailed for 15 years for possessing explosives.