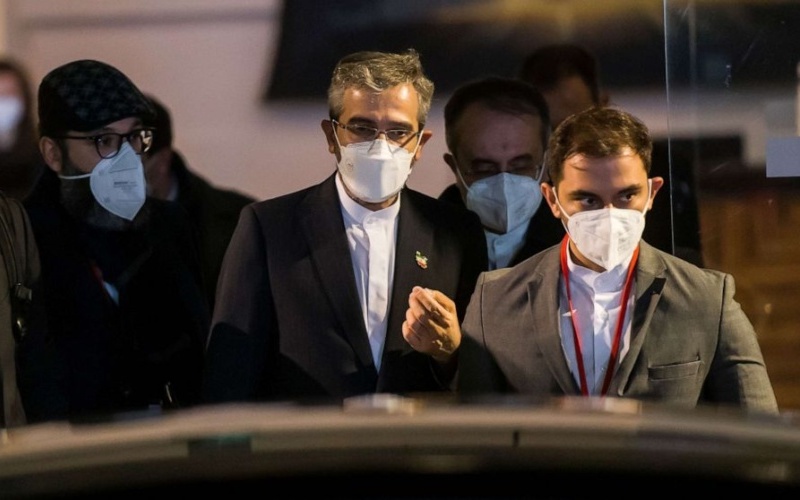 In the first day of renewed nuclear talks in Vienna, Iran has agreed to a process for a “linked” resolution over US re-entry to the 2015 deal, lifting of American sanctions, and an Iranian return to compliance with the Joint Comprehensive Plan of Action.

“Western diplomats” expressed guarded optimism and relief over Iran’s formal agreement to discuss compliance as well as sanctions removal in the discussions between Tehran, the other powers in the agreement (UK, France, Germany, China, and Russia), and the US.

Tehran has publicly maintained that there must be the US must unilaterally agree to lift the sanctions before any discussion of Iran’s steps.

But the European Union’s Enrique Mora, the broker of the talks, said Iran agreed that the talks can pick up from the last set of discussions in June, rather than reverting to the position before they began in April. He added:

I feel extremely positive about what I have seen today….

There was a sense of urgency to bring an end to the sanctions and the suffering of the Iranian people….The Iranian delegation recognizes the work we have done in the past six rounds and the fact that we will build on this work going ahead.

The leader of the Iranian delegation, then-Deputy Foreign Minister Abbas Araqchi, had said after June’s sixth round that a resolution was “closer to the end of the road”. But the new Raisi Government delayed over the next set of negotiations and, under Araqchi’s successor Ali Baqeri Kani, adopted a harder line in public.

Baqeri Kani said on Monday that he is optimistic, while emphasizing that there must be a guarantee by the Biden Administration of no re-imposition of American sanctions.

He tried to cover Tehran’s shift by proclaiming a triumph with the delegations first discussing US sanctions before any consideration of Iran’s compliance.

In fact, there is only 24 hours difference, with sanctions on Tuesday’s agenda and Iranian compliance leading Wednesday’s agenda.

Back in Tehran, Foreign Minister Hossein Amir-Abdollahian maintained the tough pose which had preceded the renewed talks: “The main goal of these negotiations is the restoration of the rights of the Iranian nation and removal of all the sanctions imposed unilaterally and extraterritorially on Iran by the United States, which is no longer a party to the JCPOA [Joint Comprehensive Plan of Action].”

But Russia’s representative at the talks, Mikhail Ulyanov, also cited progress on Monday:

The meeting of the Joint Commission on #JCPOA is over. The participants agreed on further immediate steps during the seventh round of negotiations which started quite successfully. pic.twitter.com/qZyqpaiqFw