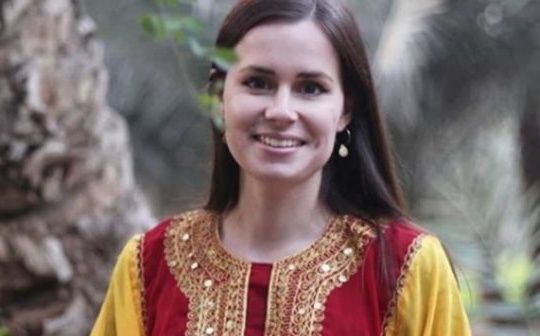 Last month Iran’s authorities transferred political prisoner Kylie-Moore Gilbert, a lecturer at the University of Melbourne, to the notorious Qarchak Prison. A judiciary spokesman denied multiple reports of her poor mental and physical health after almost two years behind bars.

This is her story, told by Matthew Condon in The Weekend Australian:

In late August 2018, scholars from around the world descended on the Iranian city of Qom for a special learning experience – the 7th Intensive Course on Shi’a Islamic Studies. The event was staged by the University of Religions and Denominations in Qom, 140km south of Iran’s capital, Tehran. It is a city of both scholarship and pilgrimage, a holy place in Shi’a Islam and home to the Fatimah bint Musa shrine, visited annually by 20 million pilgrims. One of the delegates was Dr Kylie Moore-Gilbert, a young academic from the University of Melbourne who, in her early 30s, was a rising star in the field of Gulf studies – or that of the Arabian Peninsula, Iraq and Iran. She had already published widely in books and journals, was highly respected, and had only recently married.

The one-week course in Qom promised to provide participants with the foundational knowledge, spiritual understanding and critical thinking skills required to understand Shi’ism in the contemporary world. “The workshop aims to connect scholars from a variety of disciplines and countries to study the role of Shi’a Islam in the modern Iran.” It also incorporated a social program: “For those interested in Shi’i Islamic Studies, very few places are as exciting as Qom.” And it included an optional four-day cultural tour. “Wander the streets of the Capital and spend a memorable night in the wonderful desert,” the course promised, “and witness spectacular Mosques, Temples, Synagogues and Churches in Iran”.

Moore-Gilbert was well-traveled. After finishing her schooling in Bathurst in central-west New South Wales, she had studied extensively in the UK and conducted global research for her degrees, including a Master of Arts and a PhD. After the Qom course, she was photographed with religious scholars and academics, alongside other students from Europe. She remained in the city, conducting some personal research interviews, a decision she later described as naive. It was during this stage of the trip that one of her own academic colleagues, and one of her interview subjects, reported her as “suspicious” to the Islamic Revolutionary Guard Corps, a powerful branch of the army tasked with defending the country’s Islamic system.

She was arrested at Tehran’s airport after checking in for her return flight to Australia and immediately thrown into the notorious Evin Prison under suspicion of espionage, and later charged as a spy. Without evidence, a closed court found her guilty and sentenced her to 10 years’ imprisonment. A subsequent appeal failed and last week it emerged she had suddenly been moved to an even worse hellhole, Qarchak Prison, known for being the worst female prison in the world.

Her arrest and jailing wasn’t made public until September 2019, a year after her arrest. At that time her ­family released a statement saying they were “in close contact with the Australian government”. The statement added: “Our family thanks the government and the University of Melbourne for their ongoing support at this distressing and ­sensitive time. We believe that the best chance of securing Kylie’s safe return is through ­diplomatic channels.”

“Imprisoned for A Crime I Have Not Committed”

Two years on, Moore-Gilbert’s situation remains dire as the ­government pursues a line of “quiet diplomacy”. Through letters smuggled out of the jail a sketch of her life has emerged, of deteriorating health, frequent trips to hospital, time in solitary confinement in a cell measuring 2m by 3m, and her reliance on fellow prisoners for basic provisions; and of repeated attempts by Iran to recruit her as a spy while in jail.

There have also been signs of soft resistance: she has written of her plans for a hunger strike and apparently formed a choir that sang and hummed together as a form of protest while working in the kitchen and from their individual cells. For her trouble, sources told The Times newspaper, she had been drugged and beaten.

“I think I am in the midst of a serious psychological problem, I can no longer stand the pressures of living in this extremely restrictive detention ward anymore,” one letter dated last August said. “I, an innocent woman, have been imprisoned for a crime I have not committed and for which there is no real ­evidence.”

Worried friends and global observers of her incarceration are openly wondering if enough is being done to secure this young woman’s freedom. Washington Post reporter and former Tehran ­correspondent Jason Rezaian was arrested, charged and held in Evin in a similar fashion in 2014. He was ultimately released following overt political lobbying and worldwide petitions and campaigns.

“There is always more that can be done,” Rezaian says. “I understand that some friends and loved ones of hostages believe that these situations are best resolved quietly. I don’t think there is any ­evidence to support this theory.”

There is also no evidence to support Iran’s charge that the softly spoken academic is a spy, an idea her friends laugh off as impossible and the Australian government rejects as baseless. So how did this bright young woman from regional NSW who topped the state in visual arts and caught the eye of teachers for her intelligence and thoughtful approach to life end up in a notorious Iranian prison known for detaining political prisoners?