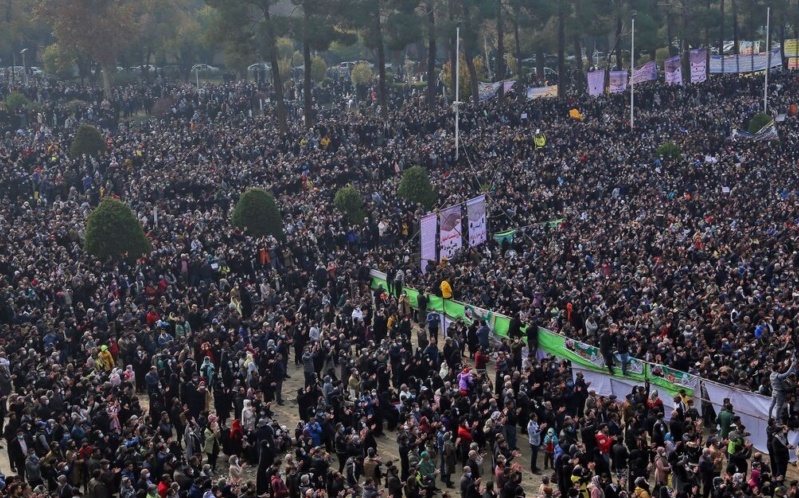 At least 214 people, including 13 juveniles, were arrested last week during the crackdown by Iranian security forces on water protests in Isfahan in central Iran, according to the US-based Human Rights Activists News Agency.

HRANA said 30 people were wounded in their eyes by pellets fired by the forces last Friday. Two are in critical condition.

Demonstrators and activists say Iranian security forces have burnt tents of protesting farmers in the dried-up bed of the rive Zayaneh Rud in Isfahan.

The sources claimed the site was being cleared after the tents were set on fire just after midnight early Thursday morning. They also said shots were heard.

On Friday, police fired tear gas and birdshot on Friday and used batons on hundreds of protesters, some of whom threw rocks, who were demonstrating in the city of Isfahan.

Fars, linked to the Revolutionary Guards, blamed foreign instigators for the tent fires. It claimed on Friday that about 300 demonstrators, in groups of 40-50, had gathered in the city, with a police motorcycle and an ambulance set on fire.

State TV showed police firing tear gas at demonstrators gathered in the dried riverbed, while a video on social media showed the protesters chanting, “Shame on you!”

State media had claimed earlier that farmers agreed to disperse after reaching a deal with officials.

“These are people, these are farmers why are you beating them? Don’t beat them… If you beat them I’ll break your hand!”

Security forces tell her not to film. She yells back, “Why not film the things you’re doing?.. I’m filming to send for the whole world to see!” #Esfahan https://t.co/l7wLBlQ8ab

ORIGINAL ENTRY, NOV 20: Protests have resurged in Iran over shortages of water.

Thousands of farmers and supporters rallied in the city of Isfahan on Friday, amid drought and mismanagement of dams and water resources.

Crowds gathered in the dried-up bed of the river Zayandeh Rud, where farmers have set up a tent city. They chanted, “Let Isfahan breathe again, revive Zayandeh Rud,” and carried signs such as “Our children want water to provide food for your children.”

In July, security forces reportedly killed protesters when they fired on demonstrations in Khuzestan Province in southwest Iran, with UN officials condemning the crackdown.

In contrast, State media acknowledged the protests this week. Energy Minister Ali Akbar Mehrabian said, “I apologize to all of our dear farmers, and I feel ashamed for not being able to provide the water needed for their crops. With God’s help, I hope we can overcome these shortcomings in the next few months.”

first Vice President Mohammad Mokhber said he had ordered the Energy and Agriculture Ministers to draaw up a plan for management of the issue “so that we will be able to go through this difficult period”. Officials will meet on Saturday.

President Ebrahim Raisi added in a Friday meeting with officials that only 47% of environmental policies have been enacted since late 2015, which is “not convincing at all“.

Farmers in Isfahan have protested for years over the diversion of water from the Zayandeh Rud to supply other areas. A pipeline carrying water to Yazd Province has been repeatedly damaged, according to Iranian media.

The effects of the drought and mismanagement have forced Iran, a historic exporter of wheat, to import a record volume.

A Tribunal on Iran’s Protests and Killings in 2019