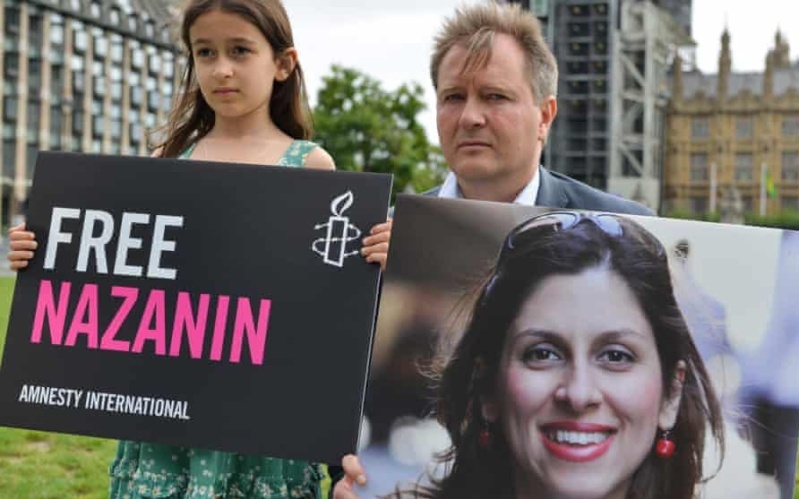 Ratcliffe announced the strike on Sunday. He said he wants UK Foreign Secretary Liz Truss to do more to ensure Zaghari-Ratcliffe, who is under house arrest in Tehran, can leave Iran.

Last week, an Iranian court upheld a one-year extension of Zaghari-Ratcliffe’s prison sentence, imposed when her original five-year term expired in April. No evidence has ever been produced to support the Iranian regime’s claims of espionage against the charity worker.

Ratcliffe is challenging the Foreign Office’s refusal to return £400 million ($551 million) to Iran, a 1970s payment by the Shah for Chieftain tanks which were never delivered.

The Foreign Office maintains that US sanctions prevent payment. It has not revealed what efforts it has made to transfer the money, or to obtain the release of Zaghari-Ratcliffe and fellow Anglo-Iranian political prisoners Morad Tahbaz and Anoush Ashoori and UK permanent resident Aras Amiri.

Just prior to the news [of the extension of Zaghari-Ratcliffe’s sentence], we had a very bleak meeting with the Foreign Office, ending with me telling them I had no confidence in their strategy and their reluctance to act: they still do not settle the debt to Iran whose impasse in 2016 caused Nazanin to be taken. There is no legal impediment now, the minister said.

But also they do nothing to disincentivize Iran’s hostage-taking, still refuse to use the word “hostage” despite promises to Nazanin. They still seem surprised each time Iran escalates – but it still happens cost-free. They still say the same slogans. At some point, soundbites don’t protect you.

Ratcliffe also went on hunger strike for 15 days in 2019, outside the Iranian Embassy in London, to highlight his wife’s case. After the strike, Iranian authorities. finally allowed the couple’s daughter, six-year-old Gabriella, to leave Iran.

He reflected on Sunday:

It can be difficult to capture the feeling of a life wasting away, watching prison creep closer while we sit in the PM’s in-tray. Nazanin was increasingly distraught last week….

In truth, I never expected to have to do a hunger strike twice. It is not a normal act. It seems extraordinary the need to adopt the same tactics to persuade government here, to cut through the accountability gap.

ORIGINAL ENTRY, OCT 17: Anglo-Iranian political prisoner Nazanin Zaghari-Ratcliffe has lost an appeal against the extension of her sentence in Iran.

The charity worker, who is under house arrest and forbidden to leave Iran, was told on Saturday that her one-year term for “spreading propaganda” has been upheld.

In April 2016, Zaghari-Ratcliffe was seized as she and her infant daughter were leaving Iran after visiting relatives. She was sentenced, without public presentation of evidence, to five years in prison for espionage.

Following news of the extension, her husband Richard Ratcliffe accused the UK Government of failing to deal with problems “until they become crises”.

He said he warned the Foreign Office at a Friday meeting on Friday about the appeal: “The longer we wait, the more chance of bad news. I didn’t expect the next day to get bad news, but we did.”

Ratcliffe, who is caring for the couple’s six-year-old daughter Gabrielle, said that Zaghari-Ratcliffe is “traumatised at the thought of having to go back to jail”.

Technically, she’s now just waiting for the phone call, saying, ‘Turn up at this prison on this day’. There’s a sword hanging over us now, it will at some point fall. It’s clearly a signal that the ball’s in the government’s court to do something.

Nazanin has lost her latest appeal and her sentence of 1 year plus 1 year travel ban is upheld with no court hearing.

She could now be returned to prison at any time.

The PM must act now to #FreeNazanin

Zaghari-Ratcliffe was released on electronic tag in March 2020, amid the first wave of Iran’s Coronavirus pandemic. However, Iranian authorities threatened last September to detain her beyond her five-year sentence with new charges. The UK Foreign Office told Zaghari-Ratcliffe’s lawyers that it has no obligation to assist her.

In April, upon the expiry of her original sentence, an Iranian court imposed the additional one-year term.

[This is an] appalling continuation of the cruel ordeal she is going through. Instead of threatening to return Nazanin to prison, Iran must release her permanently so she can return home to her young daughter and family. We are doing all we can to help Nazanin get home…and I will continue to press Iran.