UPDATE: US Airstrikes on Iran-Backed Militias in Syria and Iraq 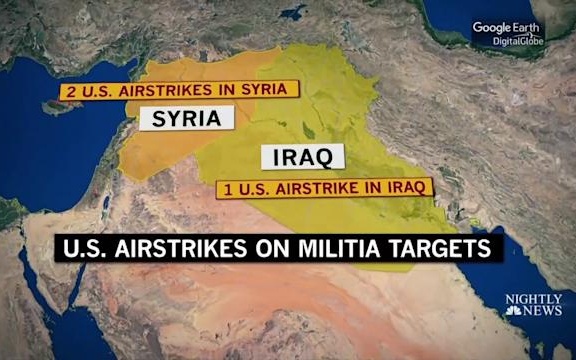 Iran-backed militias, retaliating for US airstrikes on their positions in Iraq and Syria, fired several shells at US personnel on Monday night.

The shelling was on an American positions near the Al-Omar oilfield in Deir ez-Zor Province in eastern Syria.

Col. Wayne Marotto, spokesperson for US forces in Syria and Iraq, wrote on Twitter:

Initial report: At approx. 7:44 PM local time, U.S. Forces in Syria were attacked by multiple rockets. There are no injuries and damage is being assessed. We will provide updates when we have more information.

Marotto said the US troops returned artillery fire at the launching positions.

Two of the three targets were in Syria near the Iraqi border, and the third was just inside Iraqi territory. Kirby said the depots stored arms and ammunition for the militias Kata’ib Hezbollah and Kata’ib Sayyid al-Shuhada, who have carried out attacks against US personnel on Iraqi bases for years.

“The United States took necessary, appropriate and deliberate action designed to limit the risk of escalation — but also to send a clear and unambiguous deterrent message,” Kirby said.

Kata’ib Sayyid al-Shuhada confirmed the deaths and vowed retaliation: “We will remain the shield defending our beloved nation, and we are fully ready … to respond and take revenge.”

The US strikes by F-16 and F-15e fighters were the first since late February, when seven 500-pound bombs were dropped on buildings used by the militias in eastern Syria near the Iraq border. The militias retaliated days later with rocketing of an Iraqi base.

The militia attacks continued through the spring, with at least five strikes by small, unmanned drones since April. The targets included sites used by the CIA and US Special Operations, among the 2,500 American military personnel still in Iraq.

American officials said the Pentagon was gathering information for weeks on the targeted sites and the militia networks. Defense Secretary Lloyd Austin and Gen. Mark Milley, the chairman of the Joint Chiefs of Staff, briefed President Joe Biden on options early last week.

In January 2020, the Trump Administration retaliated for the attacks by Kata’ib Hezbollah with the drone assassination of Maj. Gen. Qassem Soleimani, the commander of Iran’s Quds Forces, and Kata’ib Hezbollah leader Abu Mahdi al-Muhandis.

The strikes came amid talks in Vienna on the Iran nuclear deal, including US re-entry, lifting of American sanctions, and an Iranian return to compliance with the rollback of uranium enrichment.

The discussions adjourned just over a week ago, with Iran officials saying a deal might be agreed in the next round. However, since then, both Tehran and Washington have taken tougher public positions.

Amid the election of the hardliner Ebrahim Raisi as President, Iran has said it will end the agreement with the International Atomic Energy Agency for inspections of nuclear sites.

Last week, citing the American sanctions, the US Treasury seized 36 websites, including those of Iranian State media such as Press TV and Al-Alam and outlets for Tehran’s allies in Yemen, Ansar Allah (Houthis).