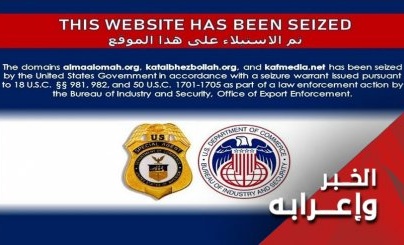 The US Justice Department has seized 36 websites linked to Iran’s political and military leaders, with an American official citing disinformation activities and ties to violent organizations.

Press TV and other Iranian channels broke the news. The Justice Department only responding hours later amid speculation about the Biden Administration’s motives.

“Today, pursuant to court orders, the United States seized 33 websites used by the Iranian Islamic Radio and Television Union (IRTVU) and three websites operated by Kata’ib Hizballah (KH), in violation of US sanctions,” the Department posted in a statement.

It used the technicality that 33 domains used by IRTVU are owned by a US company and that IRTVU did not obtain a license from the Treasury’s Office of Foreign Assets Control. OFAC oversees American sanctions on Iran over its nuclear program, alleged support of terrorism, and violations of human rights.

Some of the affected sites soon returned under Iranian domain names, such as PressTV.ir and AlAlam.ir. The Houthis, who took control of much of Yemen including the capital San’aa in 2015, relaunched Al Masirah at www.almasirah.com.

A US Move Amid Nuclear Talks

The seizures come at an important point in talks over a renewal of the 2015 nuclear deal between Iran and the 5+1 Powers (US, UK, France, Germany, China, and Russia). The sixth set of discussions in Vienna adjourned last weekend, with Iran and the EU expressing hope that negotiations could be completed during the next round. A deal would include US re-entry, after the Trump Administration’s withdrawal in May 2018; lifting of American sanctions, and an Iranian return to compliance with terms such as limits on uranium enrichment.

Iran: “Closer to the End of the Road” in Nuclear Talks

Last Friday, hardliner Ebrahim Raisi was declared the winner of Iran’s managed Presidential election. In his first speech on Monday, Raisi — who was backed by the Supreme Leader’s office — struck a tough pose over the talks and sanctions, although he is not expected to curb the negotiations.

Last October, US prosecutors seized a network of 92 web domains linked to Iran’s Revolutionary Guards. They said the sites posed as independent media outlets to spread disinformation in the US, Europe, Middle East, and Southeast Asia.

Tuesday’s seizures also targeted the Iranian military through its links with Iraq’s Kata’ib Hezbollah. The latter has carried out a series of rocket attacks on Iraqi bases with US personnel. An assault which killed an American contractor and wounded US troops preceded the American drone assassination in January 2020 of Gen. Qassem Soleimani, head of the Quds Force of the Guards, and Kata’ib Hezbollah leader Abu Mahdi al-Muhandis.