Assad Given 95% of Vote in Syria’s Staged Presidential “Election” 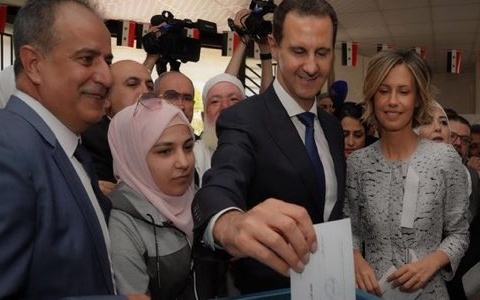 Bashar al-Assad poses with his ballot in Syria’s Presidential “election”, May 26, 2021

The Assad regime’s officials have declared Bashar al-Assad the “winner” of Syria’s staged Presidential “election” with 95.1% of the vote.

The declaration is even higher than the 88.7% attributed to Assad in 2014, Syria’s first Presidential ballot since his father Hafez took power in 1970.

Assad ran against two nominal challengers, Mahmoud Ahmad Mar’ai and Abdallah Saloum Abdallah. The other 49 candidates were disqualified. State TV and news agency SANA promoted Assad; his posters were on large billboards throughout towns and cities, and people held up his posters at gatherings.

Several million Syrians inside the country could not vote as they are outside regime-held areas. Many of the 5.6 million Syrian refugees refused to participate by voting at embassies, despite pressure on them by regime officials.

But Head of Parliament Hammouda Sabbagh declared that more than 14 million Syrians voted in a turnout of 78%.

The estimated population inside Syria is about 18 million.

The international community has criticized the election as being neither free nor fair, conducted outside the UN process for political resolution of the 122-month conflict.