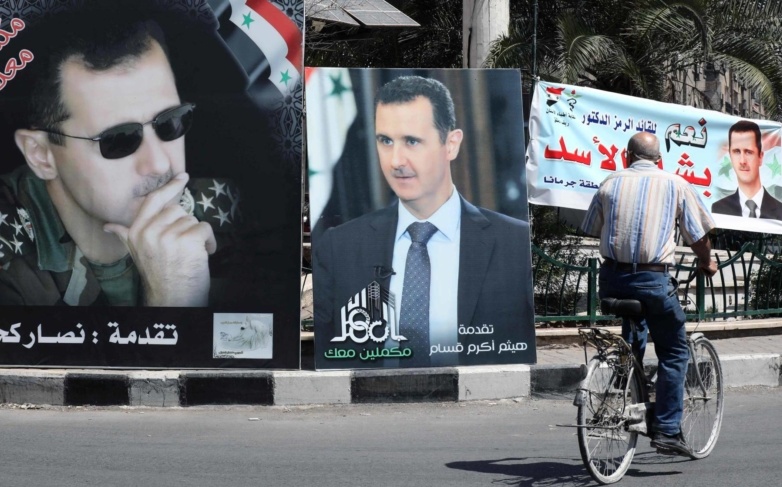 A man rides a bicycle past campaign billboards of Bashar al-Assad, Damascus, May 23, 2021 (Louai Beshara/AFP)

France, Germany, Italy, the UK, and US have challenged today’s staged Presidential “election” in Syria.

In a joint statement from Foreign Ministers, the five countries emphasized that the vote “will neither be free nor fair” and denounced the Assad regime for operating outside the UN Security Council framework for a political resolution.

Free and fair elections should be convened under UN supervision to the highest international standards of transparency and accountability. For an election to be credible, all Syrians should be allowed to participate, including internally displaced Syrians, refugees, and members of the diaspora, in a safe and neutral environment.

Without these elements, this fraudulent election does not represent any progress towards a political settlement. We urge the international community to unequivocally reject this attempt by the Assad regime to regain legitimacy without ending its grave human rights violations and meaningfully participating in the UN-facilitated political process to end the conflict.

Syrian State news agency SANA inadvertently supports the criticism. Its site this morning features video and photographs of Bashar al-Assad and his wife Asma voting, and of rallies featuring Assad’s posters. There is no sign of Assad’s nominal opponents, Abdallah Saloum Abdallah and Mahmoud Ahmad Mar’ai.

Meanwhile, there are protests against the “election”, even in regime-held areas such as Daraa Province in southern Syria.

An evening demonstration by the people of the city of #Tafas in the western countryside of #Daraa Governorate, demanding the overthrow of the Syrian regime, and condemning the presidential elections to be held tomorrow, Wednesday. pic.twitter.com/bLlpeAE1Lp

Syrians abroad have spoken about the staging of Wednesday’s Presidential “election” to keep Bashar al-Assad in power.

Saed Eido, originally from Aleppo and now in Gaziantep in southeast Turkey, said:

My brother disappeared into a regime prison in 2013. We still have no idea if he is alive or dead. They won’t give us any information. All this Presidential election does is whitewash crimes and maintain a dictatorship.

With State media featuring gatherings for Assad — but not the other two nominal candidates Mahmoud Ahmad Mar’ai and Abdallah Saloum Abdallah — Suhail al-Ghazi, a non-resident fellow at the Tahrir Institute for Middle East Policy, explains:

The regime has always made people do this to prove their loyalty. Marching in parades, waving banners, turning up in large numbers to vote … For the new generation it’s also a chance to create a sense of community and nationhood.

Today’s young people in Syria have never experienced any political activity that is not linked to armed activity. It’s a break from their terrible reality, almost, a way for the regime to make them feel included, bring them into the system, make them feel like they belong.

Eido sees a future beyond the “election”, “The regime is not there to rule, just to steal the livelihoods of its own people. That’s why, like the others, it won’t last. It can’t sustain itself forever.”

This morning the Assad regime’s media headlines the arrival of supportive delegations to “observe” the elections.

A group from Iran, which has propped up Assad throughout the 122-month conflict, is headed by MP Zahra al-Lahyan. Tehran’s support is also likely to include “analysis” from its leading spokesperson on English-language international media, Dr. Seyed Mohammad Marandi of Tehran University.

An Iraqi delegation of MPs is led by Gatah al-Rekabi.

A marker of the nature of the campaign for Syria’s Presidential “election” — Bashar al-Assad everywhere in Damascus, and no sign of the other two nominal candidates:

Damascus today in 50 seconds, under the watchful eye of the genocidal, narcissistic maniac.#Syria pic.twitter.com/3iUWCsPe9F

A video from Vanessa Beeley, an activist embedded with the regime in Damascus, seeks to display impressive rallies for Assad but achieves the opposite — the only two participants are a pair of girls dancing:

Adorable little ones dancing at a President Bashar Al Assad support party on outskirts of Zabadani, #Damascus. Anyone believing these people are "forced" to support their President after 10 years of war, sanctions & Resistance, are insane.#Syria_Rising pic.twitter.com/Da9O2nR1Uc

The Assad regime and its Russian ally insist on headlines of “rallies of national unity“, with the regime snapping at “the negative stance” of those who point out the staging: “The mass inflow of Syrians to polling stations worldwide during the May 20 early vote is the best response to the attitude, demonstrated by Paris and other European capitals.”

SANA portrays Mar’ai as a leader of the “opposition” through the Syrian Democratic Front, a coalition of six “authorized parties, bodies, and parties in the process of authorization”.

In an unwitting admission about the staging of the 2014 Presidential election, the first since Assad’s father Hafez seized power, SANA writes that Mar’ai is “the first opposition to participate” in a campaign.

In that election, Assad was awarded 88.7% of the vote against two opponents, one of whom backed him during the campaign.

Mar’ai echoed the regime’s emphasis on the presentation of a high turnout, while proclaiming that voters should choose the best qualified candidate and the best program to serve the country.

Mar’ai echoed the regime line that “Syria has been the target of aggression and conspiracy”, and that any advocate of sanctions against Syria is an agent and traitor.

The candidate did portray a distinction from Assad with a reference to “just and legitimate demands” in “the crisis [that] requires a political solution and more participation and activation of political life”.

He added that he respects any result.