UPDATED: Assad Regime’s Courtship in 2015 of a Biden Campaign Advisor 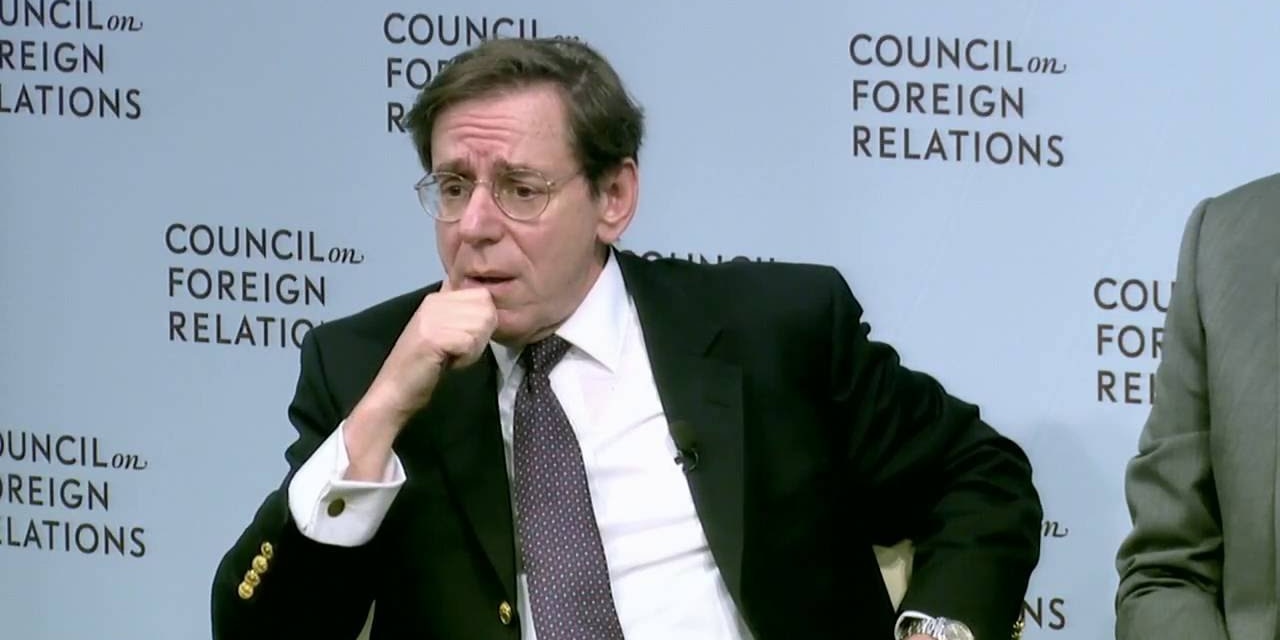 Further details on Steven Simon’s trip to Damascus in 2015 confirm that it was arranged by a key advisor of Bashar al-Assad.

Khaled Ahmad, a businessman from Homs Province, met Simon at least twice after the latter left the Obama Administration in 2012 and before the trip to Damascus.

Ahmad had met Robert Ford, the last US Ambassador to Syria, in late 2013 in Geneva. Ford urged a political transition with Assad departing power, but the businessman insisted that Washington must help the regime fight “terrorism”.

With the surge of the Islamic State in Syria in 2014, the regime used the lever to pursue its “terrorism” theme.

Simon told former colleagues that the trip was a private venture, but he consulted his successor at the National Security Council, Robert Malley, before and after meeting Assad.

Sources said Simon suggested a halt to the dropping of barrel bombs; a fight against the Islamic State rather than rebels; and cooperation with a UN-led effort for local cease-fires.

Assad responded with his template points on “terrorism”, a label he uses for opposition and anti-Assad factions, but did showed some openness to local cease-fires on regime terms, according to “two people familiar with the meeting”.

Ahmad framed the initiative as “reconciliation” through “de-escalation zones”, but the dynamic changed from September 2015 with Russia’s massive military intervention, in cooperation with Iran and Hezbollah, enabled Assad to survive and beginning the siege and recapture of opposition areas.

Biden campaign advisor Steven Simon has defended his criticism of US sanctions, and implicitly his failure to mention any Assad regime culpability in Syria’s 114-month conflict: he protests that reporter Josh Rogin had “clearly had not closely read” an article by him and University of Oklahoma academic Joshua Landis.

But Simon did not offer any response to the reference to his meetings with Bashar al-Assad and regime officials in Damascus in 2015.

Simon dismisses the concerns of the Syrian opposition about his work, “Rogin’s concerned Syrian contacts apparently wish to relitigate the civil war.”

ORIGINAL ENTRY, SEPT 5: In 2015, the Assad regime reached out to Steven Simon — now a foreign policy advisor in the campaign of Democratic Presidential candidate Joe Biden — in the hope of altering future US policy on the Syrian conflict, which has killed hundreds of thousands and displaced more than 11 million.

Simon, a former National Security Council staffer in the Obama Administration in 2011-2012, secretly traveled to Damascus in 2015 and met regime officials including Bashar al-Assad.

Simon did not publicly disclose the trip. Two “senior Obama administration officials” said he went as a private citizen and represented only himself.

Simon was a paid consultant at the Middle East Institute at the time. MEI subsequently ended its relationship because, according to two personnel, it was not consulted about the trip and did not want to be associated with it.

Playing down Simon’s membership of the Middle East advisory team, Biden campaign officials say that he is one of more than 100 team members and that his views do not reflect those of the campaign or Biden.

Syria analysts who knew of the visit at the time said it was part of outreach by the Assad regime to Washington officials and members of think tanks.

Last month, more than five years after the trip, Simon and University of Oklahoma academic Joshua Landis, a fervent critic of measures against the Assad regime, wrote an article for Foreign Policy titled “The Pointless Cruelty of Trump’s New Syria Sanctions“.

The two men lambasted the restrictions of the “Caesar Act”, adopted over the regime’s war crimes and named after the defecting Syrian military photographer who brought out pictures in 2014 of thousands of detainees who were executed, tortured to death, or died from poor conditions in regime prisons. The sanctions took effect in June, targeting Assad, members of his family, and the elite group around the regime.

The article did not say a word in criticism of the regime, apart from a passing word about “corruption”. Instead, it castigated Syrian opposition groups who rose up in 2011 — they “partake in corruption as well” — and declared, “Assad and his supporters won the country’s civil war against considerable odds” against massacring rebels and the US.

When a Twitter correspondent mentioned to Landis that the sub-headline of the article is “Assad Doesn’t Care if More of His People Starve”, the academic emphasized that he and Simon had nothing to do with it and that it was written by an editor.

The article’s recommendation was not the first time that Simon’s views have parallelled the hopes of the Assad regime. In December 2018, he recommended “handing control” of Kurdish-controlled northeast Syria to “a third party with the capacity to deliver security to both Turks and Kurds. At this stage, there is just one candidate for this role: the Assad regime.”

The recommendation fit Assad’s declaration that he would “regain every inch” of Syrian territory, and defied the opposition of both the Kurdish autonomous administration and Turkey to a regime takeover of the area.

Isolated internationally over its war crimes, including mass killing of civilians and use of chemical weapons, the Assad regime has cultivated Western figures as spokespeople for its point of view.

The regime has hosted delegations of far-right politicians from countries such as France, Belgium, Italy, and the Czech Republic. In September 2016, November 2017, and April 2018 it courted a UK delegation which included members of the House of Lords and former Archbishop of Canterbury George Carey.

Assad officials also recruited supportive activists to spread propaganda, disinformation, and war crimes denial on social media. They include the Canadian activist Eva Bartlett and Vanessa Beeley, a prominent conspiracy theorist on Twitter, who is now embedded in Damascus.

A year ago, the regime feted US activists promoting its propaganda lines, including chemical attacks denial. They included Paul Larudee and Rick Sterling of the “Syria Solidarity Movement”, the Greyzone’s Max Blumenthal and Anya Parampil, and Ajamu Baraka, the Green Party’s Vice Presidential nominee in 2016.

See also Latest Addition to UK “Working Group on Propaganda”? A Pro-Assad/Pro-Kremlin Propagandist
A Syrian Refugee: The Western “Tourists” Whitewashing the Assad Regime and My Country

In October 2017, Rep. Tulsi Gabbard of Hawaii disclosed that she met Assad in Damascus, claiming the discussion was part of a “fact-finding mission”. Gabbard, who did not inform senior Democratic legislators of the meeting, was criticized at the time and during her campaign, most notably by now-Vice Presidential nominee Kamala Harris, during her 2020 campaign for the Democratic Presidential nomination.

Although he failed to confront Bashar al-Assad after the August 2013 sarin attacks that killed more than 1,400 people near Damascus, Barack Obama spoke in 2015 of Assad finally departing power.

Obama spoke of a political process in which “we can start looking at Mr. Assad choosing not to run: “I think that Assad is going to have to leave in order for the country to stop the bloodletting and for all the parties involved to be able to move forward in a non-sectarian way.”

Obama officials such as UN Ambassador Samantha Power said Assad’s departure is essential to end the conflict. They encouraged work with the Syrian opposition to further the political effort.

But Simon was part of another camp, including his two successors as the National Security Council’s Middle East director, Philip Gordon and Robert Malley. They argued that the US should focus on the Islamic State, which was ousted from its last Syrian village in March 2019, and delay any pressure on Assad to step down.

The Assad regime was on the point of collapse in summer 2015 after rebels seized much of the country, including areas in the northwest and the south. However, Assad was saved by Russia’s massive military intervention, buttressing the support already given by Hezbollah and Iran, in September 2015.

Campaign officials say that a Biden Administration will “reengage” diplomatically on Syria but raise the pressure on Assad and withhold support for reconstruction until the leader agrees to stop atrocities and share power.

We failed in preventing a tragic loss of life as well as millions of people made into refugees or internally displaced, and that’s something that we all have to live with.

This is one of the things that we are looking hard at, and then, if we are given the responsibility, it’s something we will need to act on.

Some Syrian American activists are wary. In addition to Simon’s presence, another Biden volunteer has supported the Assad regime on social media, criticizing US backing of a Syrian opposition. The Syrian Christian woman in Ohio, who works on Arab American community outreach, has been reprimanded by the campaign for the posts but has not been dismissed.

The campaign’s Arab American community Plan for Partnership also said a Biden Administration would “mobilize other countries to support Syria’s reconstruction”, which is in line with Assad’s wishes.

Blinken said that the Caesar Act is a “very important tool” to limit the Assad regime’s ability to finance its violence and to pursue a change in its behavior. He emphaszied that as the act provides exemptions for humanitarian aid, it is Assad and not the US who is responsible for the the suffering of the Syrian people.