A Syrian Refugee: The Western “Tourists” Whitewashing the Assad Regime and My Country 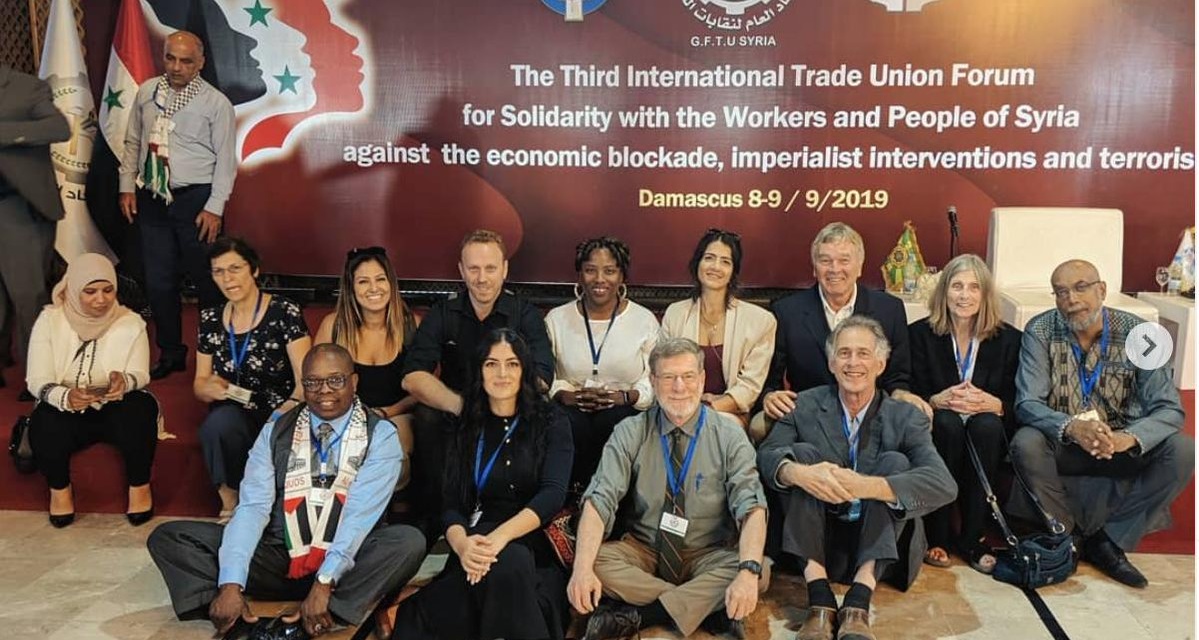 US-based activists and RT’s Rania Khalek pose for a group photograph on their tour of Syria, September 2019

Without referring specifically to the tour, Syrian refugee Sarah Hunaidi writes for The Independent:

I woke up a few days ago to Twitter selfies of westerners posing in Syrian government-controlled areas. Being an exiled Syrian for five years now, I try to avoid pictures of my home country. The country that kicked me out when I was 18 for daring to question why our government was killing peaceful protesters. I had to choose between inescapable detention and torture or being displaced, alone, in Syria’s neighboring countries, Lebanon, and Turkey. I chose the latter.

Today we witness the new era of the Syrian war: the attempt to normalize the Syrian regime turning a blind eye to its war crimes over the years. The usually paranoid Syrian state is allowing a select group of people inside its territories to whitewash its authoritarian record.

These “tourists” seem to be missing the nuances behind Syria’s political and humanitarian problems because they are stuck in a US-centric mentality. Repeatedly throwing around words like “regime change” and describing themselves as “anti-war” proves their inability to see the problems in Syria from a Syrian perspective.

Syria’s problems didn’t start in 2011 with the uprising; they started when Assad’s father, Hafez, came to power in a coup in 1971. Hafez ruled the country for 30 years, passing the seat to his son for another 20 years. What democracy are Assad apologists referring to?

These pictures surfacing on Twitter are problematic because they dismiss the struggles of the Syrian people, including refugees, who fear returning to their homeland. They do not show what kind of place the refugees can return to, or whether they can even return at all.

Many of those who return to Syria are being arrested and interrogated. According to the United Nations High Commissioner for Refugees, there are 6.7 million Syrian refugees in the world, and around half of them are in Turkey. Many of them have expressed fear of being deported to either Assad’s Syria or the unstable north, due to conscription and detention in Assad’s areas.

While people in Idlib are currently hiding under trees to avoid the Syrian regime’s bombs and suffering under the brutal rule of Hayat Tahrir al-Sham, I wonder if those on tour in the “civilized, western” side of the country could spend less time posing and more time criticizing the Syrian regime. Could they ditch the small, rebuilt areas and instead visit the Saydnaya prison where many people, like the peaceful activist Yahya Shurbaji who famously said “I’d rather be killed than be a killer”, were tortured to death?

Leaving out the regime’s crimes from the narrative and focusing on tourism is a deliberate act of propaganda, and not an act of transparency.

And where are the Syrians speaking and representing themselves?

These “tours” inside Assad’s Syria delegitimize and exclude the diverse narrative of Syrians, both inside the country and those who fled. By talking over us, the visitors relegate the massacres we Syrians survived to mere conspiracy theories. By talking to only a select number of people who claim that they represent the working class and minority groups, they make Assad seem like their protector. But as someone from a minority group, I know first-hand how Assad facilitated the ISIS attack on my province, Suwayda, to force thousands of Druze men to join his troops.

Covering for a Dictator

More nuance is needed. I don’t disagree with Assad apologists when it comes to the mistakes made by the US in Syria, but I also believe that the people who dreamt of a just and democratic country were left alone to die facing a monstrous regime. I also agree that sanctions hurt the everyday Syrian people, but dictatorships hurt the people even more. I happen to have been born and raised in one, unlike many of the people overshadowing our right to speak about our own experience under Assad.

I have to stop myself from explaining to my nephew over the phone why I can’t come home. I change the subject because I remember that he is in Assad’s Syria. Under a regime that has no problem torturing children.

No matter how many tours the Syrian government organises to sugarcoat the situations to westerners, they can’t change reality: Syria is, indeed, a beautiful and stunning country that I miss dearly. It’s also a country run by a dictator, one who, by all means necessary, crushed a popular uprising of his own people who simply demanded better.