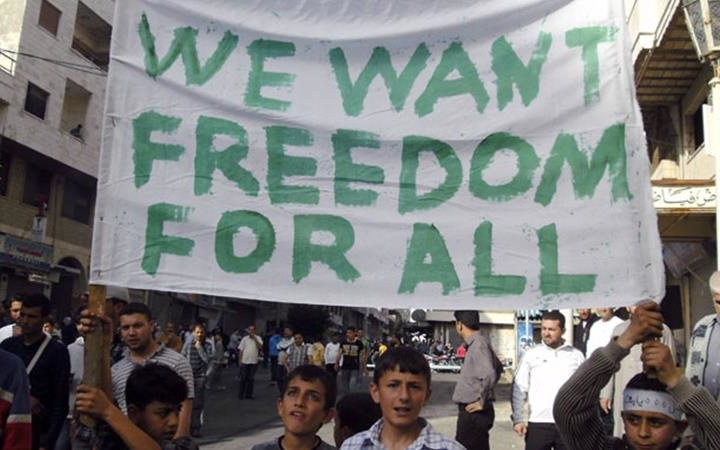 The second part of my interview with Loujean al-Saman of Levant News about the Caesar Act; the political, economic, and military situation in Syria; and the priority of remembering the war crimes against Syria’s people amid the uprising since March 2011.

He is more than a figurehead, but he is less than a leader who can rule on his own. He stays as long as Moscow accepts him being in power.

ORIGINAL ENTRY, JULY 8: In an interview with Loujean al-Saman of Levant News, I discuss the motivation for EA WorldView’s coverage of Syria from the start of the uprising in March 2011; the distress of mass killing, torture, and war crimes; and the hope that persists.

It’s not what I think about Syria. It’s not about what Donald Trump or Boris Johnson or Emmanuel Macron or Vladimir Putin see. It’s what the Syrian people see of their country, of their homes, their families, their hopes, their fears, their aspirations.

We discuss last month’s “Caesar Act”, the US sanctions against the Assad regime, named after the defecting military photographer who brought out thousands of photographs of detainees executed, tortured to death, or perishing from inhumane conditions in regime prisons.

The Caesar Act has to be part of something wider if you’re really serious about dealing with the Syrian situation. You can’t just use it as a hammer.

Let’s start with the idea that, as long as Bashar al-Assad and a very small group of people are in charge, Syria will never be stable. It’s not just the many millions displaced, the hundreds of thousands killed. It’s the widespread part of Syrian society, the majority possible, who cannot see a way forward with a President who killed many of them.

Assad had to go, but how does he go? So the Caesar Act has to be part of a plan for a genuine political transition. And you have to protect as many Syrians as you can in the meantime.