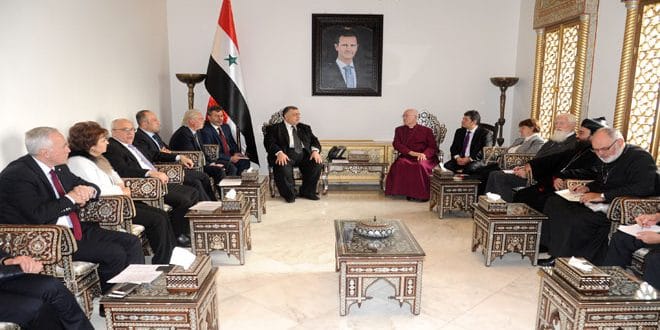 This week the Assad regime has been taking full propaganda advantage of a British delegation, including several clerics, in Damascus.

The Britons, including members of the House of Lords and the former Archbishop of Canterbury, have been paraded before Bashar al-Assad’s senior advisor Bouthaina Shaaban, “National Reconciliation” Minister Ali Haidar, Speaker of the People’s Assembly Hammouda Sabbagh, and a Syriac Orthodox Patriarch and given a tour of the National Center for Visual Arts — all so the regime can proclaim that the delegation “expressed solidarity with the Syrian people in their war against terrorism which is backed by some regional and Western governments”.

Alicia Buller writes for Arab News, with a contribution from EA:

The former head of the Church of England has been slammed over a reported visit to Syria this week at the invitation of the government of Bashar Assad.

Lord Carey, the former Archbishop of Canterbury, is part of a delegation of UK government peers and priests that is visiting Damascus this week, according to the Syrian Arab News Agency (SANA).

Baroness Caroline Cox and Lord Raymond Hylton also took part in the controversial visit, according to SANA, which broadcast videos of the meeting.

[Editor’s Note: Some of the delegation also were featured in regime propaganda during a September 2016 trip to Damascus.]

Baroness Caroline Cox, who is leading the delegation, has said her intention was to highlight the plight of Christians in Syria.

But critics told Arab News the group is instead granting “dangerous” legitimacy to a leader guilty of war crimes.
Cox, who was heavily criticized for meeting with Assad himself in September 2016, reportedly visited the National Center for Visual Arts in Damascus with her delegation on Monday.

“The center succeeded in showing the positive spirit that the war could not destroy in art and the Syrians and their determination to stand firm,” Cox was quoted as saying by SANA.

The UK party visit comes as at least 80 people were killed on Monday in suspected Russian and Syrian government shelling in the eastern and southern parts of the country. The majority of those killed were civilians.

Scott Lucas, professor of international politics at the University of Birmingham and founder of Syrian specialiast website EA WorldView, said the UK delegation has been invited by the Syrian government to “shore up support” for Assad’s regime and emphasize the party line that the government is being wronged by invading parties and enemies.

Baroness Cox and her delegation are supporting a regime that is accused of war crimes by the UN, including chemical weapons, mass killing of civilians, sieges and starvation, indiscriminate bombing and the detention, torture or killing of thousands of political prisoners.

It would be better to have a recognition of what has happened in Syria since 2011 rather than an endorsement of the propaganda line of a small group which is the Assad regime.

Lucas said that the current visit by Cox’s party was a “continuation” of her visit last year and that the new addition of Lord Carey to the group was a “propaganda coup” for the Assad regime. “After all, it’s better to get other people to criticize your enemies,” he said.

Lucas also questioned the timing of the group’s visit, which comes as the Geneva Peace Talks revisit the war in Syria on Tuesday.

“The visit is a clear propaganda device,” the professor claimed. “What happens is they (the Syrian regime) tend to invite the same group of people and they portray it as being this great wave of support.”

Chris Doyle, director of the London-based Council for Arab-British Understanding, also raised concerns about the visit, writing on Twitter: “Former Archbishop Lord Carey’s visit to Syria will only be used as propaganda by the Syrian regime. Will Carey demand release of detainees, end of besieged areas, end of bombing of civilian infrastructure?”

On what planet does Lord Carey think it is a wise move to go to #Syria Regime media lapping it up even as it bombs East Ghouta https://t.co/mZYEstl3oR pic.twitter.com/tWvPyJEAui

Doyle told Arab News, “Lord Carey is a propaganda tool. He represents a step-up from the previous delegations as he is the former archbishop and is therefore seen as an ethical voice. In reality, he is meeting with a war criminal. He is legitimizing the regime and allowing it to pretend that Syria is a part of the international community.”

He added, “Too many people are willing to airbrush Syria’s bloody crimes, for which there is a tsunami of evidence. The questions need to be put to both Lord Carey and Baroness Cox, what did they think they would achieve with this visit?”

Neither Lord Carey, Lord Raymond Hylton, nor Baroness Cox responded to requests for comments. The party is thought to be returning to the UK on Thursday.

A spokesperson for the House of Lords distanced the government from the trip, telling Arab News, “The visit was not in an official capacity or as a representative of the House of Lords so any questions should go to Baroness Cox.”