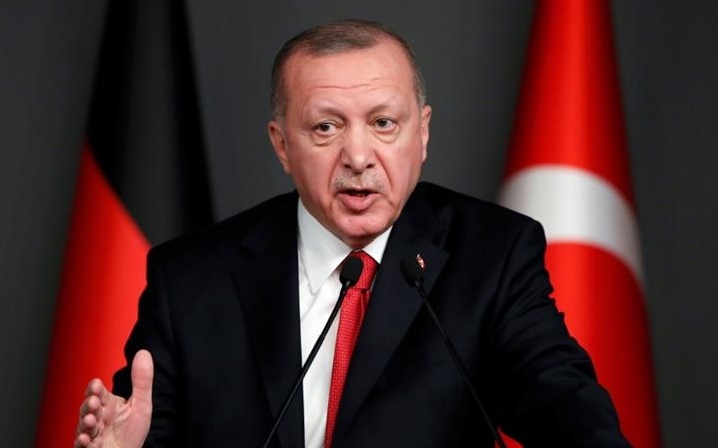 Turkey’s President Recep Tayyip Erdoğan (pictured) has declared again that Ankara will intervene to prevent the mass killing and displacement of civilians in northwest Syria by a Russia-regime offensive.

Erdoğan said on Friday of the offensive, which has killed more than 1,500 civilians, wounded thousands, and displaced more than 800,000 since late April, “We will not allow the [Assad] regime’s cruelty towards its people, through its attacking and causing bloodshed.”

He told provincial heads of his ruling Justice and Development Party (AKP), after another 80,000 people were displaced in Idlib Province in 48 hours this week:

[The regime is] continuously threatening our country with migration. Turkey in complete sincerity wants Syria’s stability and security, and to this end, we will not shy away from doing whatever is necessary including using military force.

Erdoğan has recurrently said that Turkey will use its forces, who have been in northern Syria since August 2016, to check the offensive. He chided Russia by name for the first time on Wednesday, “We have waited until now, but from this point, we are going to take our own actions.”

But Ankara has taken little action to halt the Russian and regime ground and air attacks, which shattered a “de-escalation zone” — declared by Erdoğan and President Vladimir Putin in September 2018 — around Idlib and northern Hama Provinces.

When Turkey tried to move forces into southern Idlib last summer, putting troops in the way of pro-Assad units, Russia bombed the main highway to prevent the deployment.

Russia and the regime have seized almost all of northern Hama Province and part of southern Idlib, and are also attacking western Aleppo.

Moscow has periodically announced “ceasefire” and “pause” in military operations, only to break the supposed halt — in the latest case, pushing aside its January 12 announcement within 48 hours.

More than 3 million people — 20% of Syria’s remaining population — live in the greater Idlib area. Turkey hosted more than 3.6 million Syrian refugees, but closed its border in 2016.

The Turkish President said the only solution for Syria was a political process involving all citizens.

But he did not explain how the Astana process — involving Russia, Turkey, and Iran since January 2017 — could be effective when Moscow was putting a priority on military operations alongside the Assad regime.

A UN-brokered effort for a Syrian Constitutional Committee, set up by the Astana talks, has made little progress. The Assad regime’s has refused to deal with many of Syria’s opposition groups and has invoked “sovereignty” and “terrorism” as priorities.