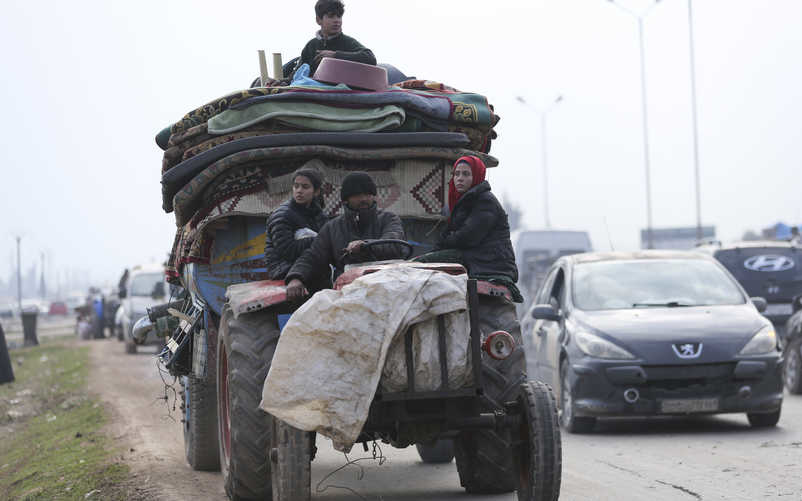 Turkey’s President Recep Tayyip Erdoğan has pledged a “new stance” in the face of the Russia-regime assault on northwest Syria.

Erdoğan said that with the offensive — which has killed more than 1,500 civilians, wounded thousands, and displaced more than 800,000 since late April — Moscow has failed to abide by processes, which include Turkey and Iran, for a political resolution of Syria’s conflict.

He told journalists on return from a three-country visit to Africa:

Unfortunately, Russia hasn’t abided by either the Astana or Sochi agreements. We have waited until now, but from this point, we are going to take our own actions. This is not a threat, but our expectation is that Russia will give the regime the necessary warning.

The offensive shattered a “de-escalation zone”, around Idlib and northern Hama Provinces, which was declared by Erdoğan and Russian President Vladimir Putin at Sochi in southern Russia in September 2018.

In the spring, Russia used airstrikes to block Turkish military convoys moving to southern Idlib. Putin broke his declared “pause” in operations, made in September, with the resumption of the ground and air assault in November.

And a “ceasefire” announced by Moscow on January 12 lasted only 48 hours before Russia renewed its bombing to support the advance of pro-Assad forces, notably upon the “ghost city” of Ma’arat al-Nu’man in southern Idlib.

In the past six weeks, at least 450,000 civilians have been displaced. More than 50,000 have fled in the past week as Russia and regime forces moved into Ma’arat al-Nu’man, 32 km (21 miles) south of Idlib city.

More than 3 million people, about 20% of Syria’s remaining population, live in the greater Idlib area. They are effectively trapped, with Turkey closing its border in 2016 after taking in more than 3.6 million Syrian refugees.

Turkey has repeatedly called for a halt to the offensive, but has been careful not to call out Moscow, with whom it has been co-operating since a reconciliation between Erdoğan and Putin in July 2015.

That changed on Wednesday when the Turkish President said:

Russia tells us they fight against terrorism. Who are terrorists? The people fighting to defend their own lands?

But a well-placed pro-opposition analyst cast doubt on any substance behind Erdoğan’s words: “No one on the ground believes anything will follow up such Turkish statements. Russia humiliated the Turks way too often.”

Two weeks ago, Turkish intelligence chief Hakan Fidan met the Assad regime’s head of State Security, Ali Mamlouk, in Moscow. It was the first official contact between the two men in years.

Russia Upset at UN Attention to Attacks on Civilians

Instead, TASS features Moscow’s attempt to push back UN criticism of its mass killing of civilians.

The UN Under Secretary-General for Humanitarian Affairs, Mark Lowcock, told the Security Council of the airstrikes that have devastated the area as Russia and the Assad regime occupied almost all of northern Hama Province and part of southern Idlib.

Russia’s Ambassador Vassily Nebenzia tried to deny the information on the civilian casualties as “statements, which look as if they had been copied, about the bombardments of schools, hospitals, marketplaces and sites accommodating internally displaced persons”.

The UN has reported that Russia and the Assad regime have attacked about 70 medical facilities, more than 100 schools, mosques, schools, markets, and civil defense centers since late April.

I want to ask you once more: Where do you collect your ‘reliable’ data? Where have you found so many medical institutions that had already been bombed-out?….

Mark Lowcock seems to have lacked time to heed both us and the Syrian representative. It is a pity as we are convinced that it would have been useful to listen to us.

The Russian “Center for Reconciliation” said on Wednesday that “no civilians were affected” by the attacks on northwest Syria.