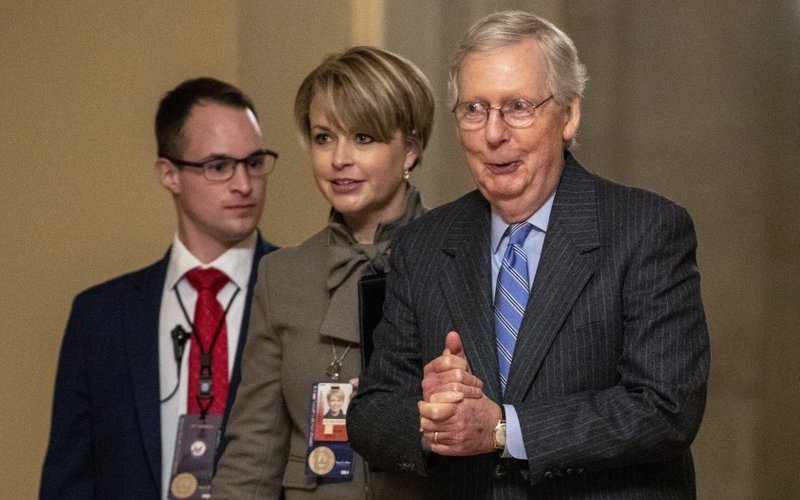 Republican Senators shut down the impeachment trial of Donald Trump for abuse of power and obstruction of Congress, blocking witnesses and documents about Trump’s pressure on Ukraine for investigations of political rivals.

The 51-49 vote on Friday came after GOP Sens. Lamar Alexander and Lisa Murkowski — both of whom accepted the House managers’ case over a campaign by Trump and his personal attorney Rudy Giuliani for the investigations, including Trump’s freeze on security assistance for Kyiv — balked at defiance of the White House and Senate Majority Leader Mitch McConnell.

The White House feared at the start of the week, after revelations by former National Security Advisor John Bolton directly linking the aid suspension and the Trump-Giuliani campaign, that up to a dozen Republicans could defect. In the end, only Sens. Mitt Romney and Susan Collin joined the Senate’s 47 Democrats in seeking testimony from officials such as Bolton.

On Thursday, Alexander foreshadowed McConnell’s success in quashing the trial. He conceded Trump’s abuse of power, but reduced it to “inappropriate” actions and said on the Senate floor, “The question then is not whether the president did it, but whether the United States Senate or the American people should decide what to do about what he did.”

Murkowski had been considering a vote for witnesses, but Alexander’s refusal pointed to a 50-50 tie. Chief Justice John Roberts, presiding over the trial, would then have to cast the deciding vote.

So the Alaska Republican converted the White House’s order to current and former officials to defy subpoenas, during the House impeachment hearings, into a pretext supporting the blockade.

Given the partisan nature of this impeachment from the very beginning and throughout, I have come to the conclusion that there will be no fair trial in the Senate. I don’t believe the continuation of this process will change anything.

America will remember this day, unfortunately, where the Senate did not live up to its responsibilities, when the Senate turned away from truth and went along with a sham trial.

If the President is acquitted, with no witnesses, no documents, the acquittal will have no value because Americans will know that this trial was not a real trial.

The final Senate vote, with Republicans ensuring that Trump is not convicted, has been set for Wednesday. That will be after Monday’s Iowa caucuses, the first Democratic contest for the Presidential nomination, and Tuesday’s State of the Union address by Trump.

Republicans: Trump Did It. So What?

A series of Republican Senators acknowledged Trump was guilty of the impeachment charge of abuse of power, but set that aside to close proceedings.

Rob Portman, who urged Trump to restore the security assistance to Ukraine, said, “Some of the president’s actions in this case — including asking a foreign country to investigate a potential political opponent and the delay of aid to Ukraine — were wrong and inappropriate.”

Marco Rubio rationalized, “Just because actions meet a standard of impeachment does not mean it is in the best interest of the country to remove a president from office.”

Alexander, who was seen as the critical swing vote on witnesses, said Trump’s guilt was a reason to shut down the trial and proceed to Trump’s re-election attempt in November.

“If you are persuaded that he did it, why do you need more witnesses? The country is not going to accept being told that they can’t elect the president they want to elect in the week the election starts by a majority for a merely inappropriate telephone call or action.

You don’t apply capital punishment for every offense.

“The Facts Will Come”

Rep. Adam Schiff, the lead House manager, put the Republican stonewall in a wider context just before the vote. He set out the damage to the US Constitution and democratic processes, as well as the verdict of history on the legislators.

The facts will come — out in all of their horror, they will come out. The witnesses the President is concealing will tell their stories.

And we will be asked why we didn’t want to hear that information when we had the chance. What answer shall we give if we do not pursue the truth now?

Meanwhile, Trump — trying to belittle the Democrats as “scamming America” — inadvertently admitted to the success of his obstruction of Congress, with the order for defiance of subpoenas.