TrumpWatch, Day 1,105: Trump’s Attorneys — He Can Do Anything and Not Be Impeached 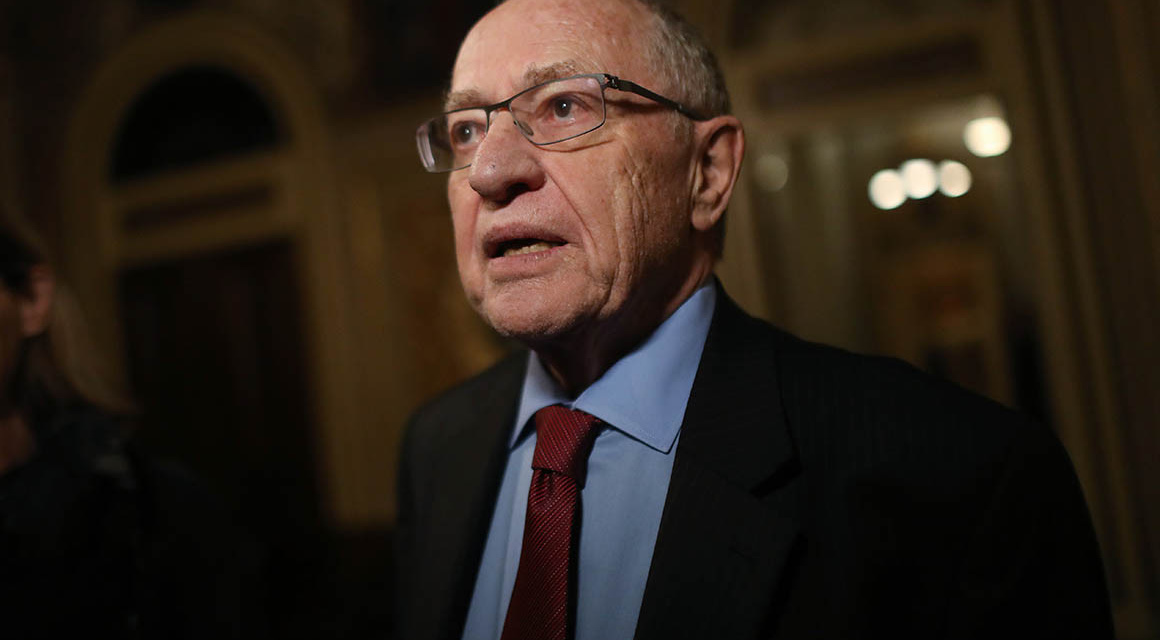 Alan Dershowitz: If Trump sought Ukraine intervention to “help him get elected”, that cannot be impeached (Mario Tama/Getty)

In the Senate trial of Donald Trump, his attorneys argue that he can take any action and be immune from conviction for abuse of power.

Responding to Senators’ question on Wednesday, Alan Dershowitz asserted that Trump’s personal interest could be pursued if he also said it was also in the public interest — including call on a foreign power to help him with an election or re-election campaign.

If a president did something that he believes will help him get elected — in the public interest — that cannot be the kind of quid pro quo that results in impeachment.

One impeachment charge against Trump is that he punished Ukraine, including the freezing of security assistance, until it announced investigations to tarnish Presidential candidate Joe Biden and to cover up Russia’s role in the 2016 US election. The other is that, with the White House order to current and former officials to defy subpoenas, Trump obstructed Congress.

In their presentations and in Wednesday’s answers, Trump’s team avoided the weight of evidence, instead attacking the process.

Rep. Adam Schiff, the lead House manager, noted that Dershowitz’s argument gives a President “carte blanche” to use the office to personal interests.

House manager Rep. Jason Crow explained how the 10-month campaign by Trump and his personal attorney Rudy Giuliani for Ukraine’s investigation did not fulfill national interest:

There are well-established processes, mechanisms and agencies in place to pursue valid and legitimate national security interests of the United States. Like the National Security Council, like the national security adviser as in ambassador John Bolton, and many other folks within the State Department and the Department of Defense. And as we have well established over the last week, none of those folks, none of those agencies that would have been involved in having that deliberation, reviewing that evidence, having that discussion, or incorporated into any type of inter-agency review process during the vast majority of the time that we are talking about here.

Dershowitz went beyond even what his colleagues had argued earlier in the Q&A session. Patrick Philbin had said Trump could be excused if there was a “possible public interest” — not that Trump believed there was such an interest — alongside his personal interest:

Philbin’s response was to a question by Republican Sens. Mitt Romney, Susan Collins, and Lisa Murkowski. The trio are seen as critical in Friday’s vote on whether to ensure a full trial by allowing witnesses and documents.

The White House and Senate Majority Leader Mitch McConnell are blockading any testimony, including that of former National Security Advisor John Bolton, whose revelations have rocked the Trump camp this week.

But if four Republicans join the 47 Democrats, the witnesses will be permitted according to the judgement of Chief Justice John Roberts, who is presiding over the trial.

In extracts from his forthcoming book, Bolton directly ties Trump’s freezing of Ukraine security assistance to the demands for investigations.

House managers drove home the point on Wednesday, explaining that it was essential to hear from the former National Security Advisor.

When you have a witness as plainly relevant as John Bolton, who goes to the heart of the most serious and egregious of the president’s misconduct, who has volunteered to come and testify, to turn him away and to look the other way, I think, is deeply at odds with being an impartial juror….

If you have any lingering questions about direct evidence, any thoughts about anything we just talked about, anything I just relayed or we talked about the last week, there is a way to shed additional light on it. You can subpoena Ambassador Bolton and ask him that question directly.

Trump’s attorneys did not challenge Bolton’s evidence but said the summoning of witnesses would extend the trial for weeks.

They said that they were unaware of the revelations in the manuscript. However, the White House said that its counsel and the lead Trump attorney in the trial, Pat Cipollone, had been briefed by National Security Council staff members who reviewed the draft.

And the White House briefed the media on Wednesday that it is trying to hold up publication of the book, due in March. The National Security Council released a letter, sent last week to a lawyer for Bolton, saying that the draft contained “significant amounts” of classified information.

Trump supporters, many of them former backers of Bolton, attacked the advisor on social media. Trump joined in:

….many more mistakes of judgement, gets fired because frankly, if I listened to him, we would be in World War Six by now, and goes out and IMMEDIATELY writes a nasty & untrue book. All Classified National Security. Who would do this?

Stumbling over Biden and Ukraine

The Trump camp also faced potential trouble from other questions on Wednesday. Attorneys evaded the inquiry — from Sens. Murkowski and Collins — if Trump had ever mentioned Joe Biden or his son Hunter, a board member with the Ukrainian gas company Burisma, before before the former Vice President entered the 2020 Presidential race last April.

The timing is crucial. If Trump showed no concern over Hunter Biden before the launch of his father’s campaign, it would point to Trump’s personal political motive.

The attorneys also refused to Romney’s question about the exact date that Trump ordered the hold on aid to Ukraine.