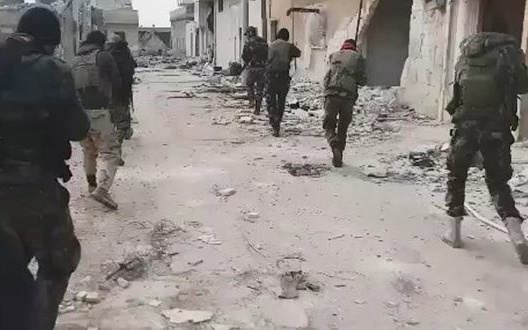 Russia and the Assad regime have occupied the “ghost city” of Ma’arat al-Nu’man in northwest Syria, after weeks of ground and air attacks that have displaced more than 400,000 people in the area.

Assad forces entered Ma’arat al-Nu’man, which had a population of 70,000 until December, on Tuesday. Last weekend, the Russian-regime offensive had moved through a series of villages and cut the M5 highway, which runs between Aleppo and Damascus, to the north of the city.

Local activists told EA over the past week of the attempts to evacuate remaining civilians from the area around the city, describing roads jammed with vehicles even as Russian and regime warplanes continued bombing. More than 50,000 people fled since Friday.

Mohammed Haj told Reuters, “When the airstrikes began we fled our village and the area. We can no longer stay. We don’t know where to go, we just got in our car and left.”

“Today and yesterday there was a big exodus. There is heavy shelling in the areas south of Idlib,” said Salman Eid, a 28-year-old from Talat al-Karama. “People took their children and belongings and are going to the camps.”

Ma’arat al-Num’an is 32 km (21 miles) south of Idlib city, held by the opposition since spring 2015. The city’s residents had protested against both the Assad regime and the hardline jihadist bloc of Ha’yat Tahrir al-Sham, which controlled much of Idlib Province from 2017.

The Russian-regime offensive began in late April, shattering a “de-escalation zone” declared by Russia and Turkey in September 2018. Breaking periodic ceasefires declared by Moscow, the ground and air assault has killed more than 1,500 civilians, wounded thousands, and displaced more than 800,000. About 70 medical facilities, more than 100 schools, mosques, markets, and civil defense centers have been bombed.

The civilians are effectively trapped after Russia and the regime occupied almost all of northern Hama Province and part of southern Idlib. Turkey, which hosts more than 3.6 million Syrian refugees, closed its border in 2016.

The area which has a population of about 3 million — 20% of the remaining population in Syria.