After weeks of high-level talks, the US and Russia announced an introductory deal for temporary ceasefires in Syria’s 5/12-year conflict early Saturday.

US Secretary of State John Kerry and Russian Foreign Minister Sergei Lavrov, meeting in Geneva, announced a plan which begins on Monday with a seven-day continuous “genuine reduction of violence” to allow aid to parts of Syria’s largest city Aleppo and besieged towns.

Opposition groups have criticized the proposal for putting control of “humanitarian” routes in the hands of Russia and its ally, the Assad regime, ensuring aid to pro-regime districts but continuing to hold opposition areas hostage.

But UN envoy Staffan de Mistura, appearing with Kerry and Lavrov, endorsed the arrangements, and the Secretary of State insisted, “No one is basing this on trust. We are basing it on oversight and compliance.”

There is likely to be further tension over the second main element of the plan, which will take effect if the temporary ceasefires hold: a US-Russian Joint Implementation Center to share targeting data for bombing of the Islamic State and the jihadists of Jabhat Fatah al-Sham, formerly Jabhat al-Nusra.

Since its aerial intervention last September, Russia has used the pretext of strikes on the Islamic State and Jabhat al-Nusra to carry out the large majority of its attacks on opposition areas, with thousands of sorties including cluster munitions and incendiary weapons. Last week, Russia stepped back from the deal with the US so it could continue intensive airstrikes to enable a pro-Assad advance which renewed the siege of opposition areas of Aleppo.

Moscow is maintaining the line that rebels must be “separated” from JFS/Nusra or face attack. Meanwhile, on Thursday an airstrike — whether American or Russian is still unclear — killed a leading commander of JFS/Nusra and wounded others in Aleppo Province.

Kerry asserts that, under the deal, Russia will restrain the Assad regime’s air force from carrying out any attack on opposition territory. However, the Defense Department — including Defense Secretary Ashton Carter — has been sceptical that this will occur.

Kerry was cautious in the press conference with Lavrov: “We believe the plan, if implemented, if followed, has the ability to provide a turning point, a change.”

While not naming any body, Lavrov’s remarks were aimed at the High Negotiations Committee — created in a meeting in Saudi Arabia last December — which presented a detailed plan earlier this for a political transition:

Some countries try to stage provocations and present one of opposition groups as a structure that represents everyone ready to negotiate Syria’s future. There are even attempts to legalize these structures through invitation to UN Secretariat. We see such sentiments and think that they are in principle a violation of what was agreed in the framework of the International Syria Support Group and of the UN Security Council resolution.

Those countries that watch over this or that opposition structure, should fully understand their responsibility for thinking about Syrian people, their unity, the unity of the Syrian state, instead of not pulling a blanket over themselves and thinking about their own ambitions.

The HNC’s proposal provides for a six-month negotiating process leading to the transitional body, followed within a year by Presidential, Parliamentary, and municipal elections. President Assad will remain in office during the transitional period, but will be expected to depart by the end.

The Assad regime immediately rejected the initiative as “crazy” and “unbelievable”.

20 Questions About the Deal

The New York Times correspondent covering the Syrian conflict, Anne Barnard, posts a series of 20 questions on Twitter about the deal. The queries begin:

2. Is there a plan to win buy-in from Syrians – pro-government, pro-opposition, or other? As one put it: "Don't we have a word to say?"

3. Kerry called govt airstrikes “main driver of civilian casualties & migration flows." Why so many loopholes for them to continue?

4. What was/will be the role of Turkey, having recently sent tanks into Syria, in striking/preserving/supporting/disrupting this deal?

5. Are there any measures to hold Russia, Syria, the US, or for that matter any party besides Syrian opposition, to account for violations?

The Pentagon has denied that US warplanes killed and wounded commanders of the jihadist Jabhat Fatah al-Sham, formerly Jabhat al-Nusra, lat Thursday.

“It was not a US strike,” Pentagon spokesman Captain Jeff Davis said. “Whatever happened there, it was not something that the US military did.”

Abu Omar Saraqeb, who led JFS/Nusra forces near Aleppo, was killed in the bombing of a meeting of commanders. Abu Mousa al-Shami was seriously wounded.

“We don’t have any reason to be in Aleppo, it’s not a place where ISIS [the Islamic State] is,” Davis said.

A US defense official later said that Russia was the “leading suspect” in the strike.

Rebels have launched an offensive in Quneitra Province in southwestern Syria.

“The Qadesiyyah of the South” offensive, named after a battle in 636 AD between Arab and Persian armies that led to the Islamic conquest of Persia, includes the Ahrar al-Sham faction.

The rebel announcement said the offensive would show that the loss of the Damascus suburb Darayya, which surrendered in late August after 45 months of siege and bombardment, was not “ultimate defeat” because of the presence of Darayya’s fighters.

Rebels took much of Quneitra in spring 2015, but pro-Assad forces still hold some positions.

Attacks on Saturday began with assaults on the villages of Taranja and al-Hemira (see map), as rebels tried to advance on the town of Hader. 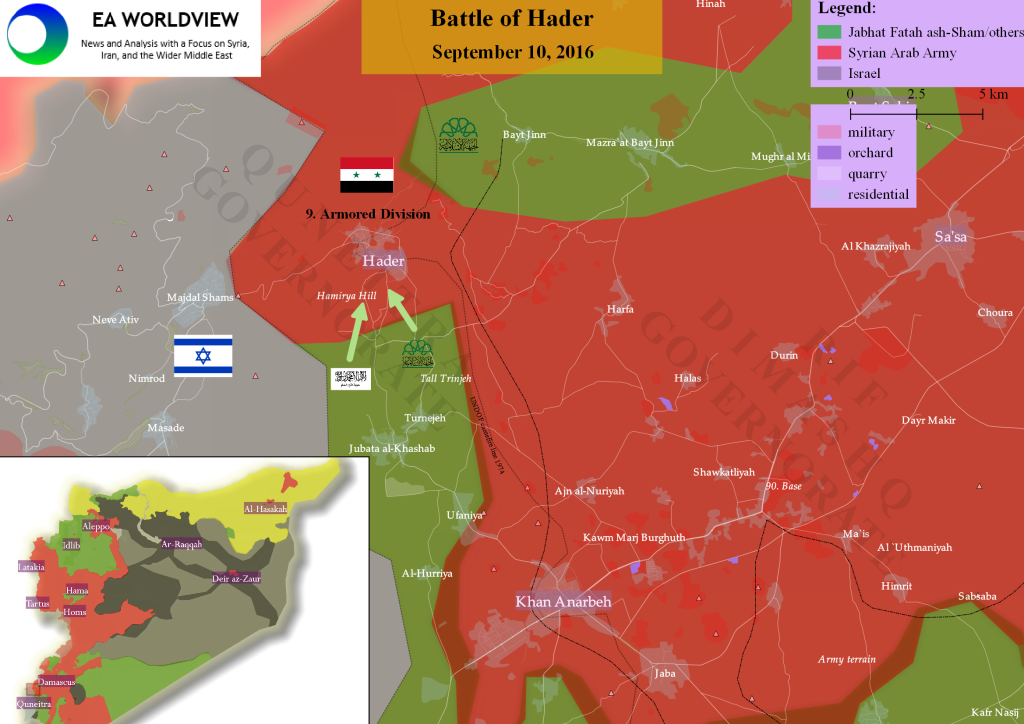 French authorities have seized private mansions, offices, and a horse stud farm belonging to Rifaat Assad, the uncle of the Syrian President.

Rifaat Assad, who commanded Syria’s internal security forces in the 1970s and early 1980s, was charged in June with tax fraud and corruption for receipt of embezzled public funds. Investigators estimated that he and his family built 90 million Euros ($100 million) of real estate in France, mainly through companies registered in Luxembourg, between 1984 and 1988.

The Assad family claims the fortune is the result of gifts from wealthy Saudi supporters, including former King Abdullah. French authorities have said he has only produced proof of one donation for $10 million in 1984.

Rifaat Assad’s security forces were responsible for tens of thousands of deaths, including the bloody suppression of the Hama uprising in 1982. He was forced into exile in 1984 for trying to overthrow his older brother, the late Syrian dictator Hafez Assad.