Catalonia Q&A: The Quest for Independence from Spain 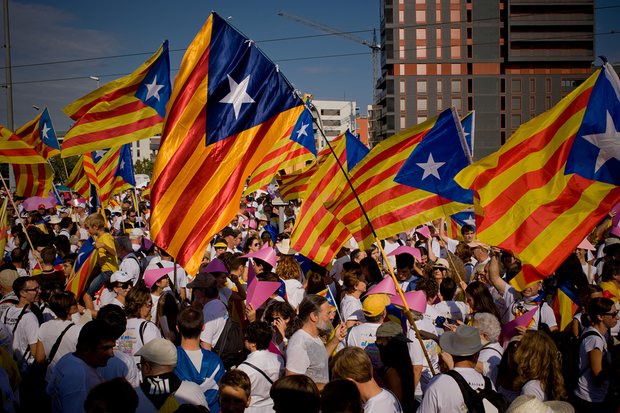 On Sunday, the nation of Catalonia celebrates Independence Day, with many hoping that the nation will be formally independent of Spain in the near-future.

Xènia Bussé, a Catalan journalist at the digital publication El Món and the monthly magazine Serra d’Or, is interviewed by EA Worldview’s Digital Media Editor, Ellis Palmer Babe, about the history of Catalonia and its present situation:

So give us a history lesson, Xènia: what exactly do Catalans commemorate on September 11?

The Catalan National Day (also known in Catalan as the Diada) commemorates the defeat of Catalonia by the military forces of the Bourbon dynasty, led by Philip V. On September 11, 1714, Barcelona surrendered to the Bourbon troops who had been besieging the city for 14 months.

The siege of Barcelona, with the first bombing of a civilian population in history, brought huge human and material losses to the city. Men, women, and children were forced to fight for Barcelona and Catalonia.

After the defeat, Philip V banned Catalan institutions and laws, persecuted the language and culture, and introduced an absolute monarchy. Catalonia was punished not only for its own cultural and political personality but also because it had supported the Austrian side during the War of the Spanish Succession, when Philip V and Archduke Charles of Austria fought for the right to hold the Spanish throne.

What’s been happening over the last 10 years or so that has led to the growth of the independence movement?

To understand what Catalonia has experienced in recent years, it is necessary to go back to the Catalan Presidency of Pasqual Maragall (2003-2006), with a new statute for Catalonia that improved upon the previous 1979 Statute of Autonomy.

Maragall wanted more self-government for Catalonia and more guarantees, as the 1979 Statute had become worthless in many areas and the Spanish state had been trying to limit it to regain power for the central government. Maragall believed that, by promoting a new statute with the approval of Spanish Prime Minister Rodríguez Zapatero — the head of the PSOE party that Maragall led in Catalonia — the new laws would advance the nation.

In 2006, the Catalan people voted in a referendum to approve the already watered-down Statute, but then 50 MPs from the conservative People’s Party (PP), various Spanish regional governments, and the Spanish Ombudsman decided to submit the Statute to the Constitutional Court to further deform it. For the first time, a vote made legally by the citizens of Catalonia could be suspended by a Spanish political court. This was the last drop of humiliation that the Catalans could tolerate.

In 2010, four years after the referendum, the Constitutional Court issued its opinion that overturned much of the new Statute and declared the fundamental laws of Catalonia to be illegal. Therefore, democracy was suspended de facto.

The Catalan people had seen enough. In 2010, there was a massive protest in Barcelona organized by the civil society organisation, Omnium Cultural. It was attended by 1.5 million people and representatives of all the Catalan parties except the PP and anti-Catalanist Citizens Movement. 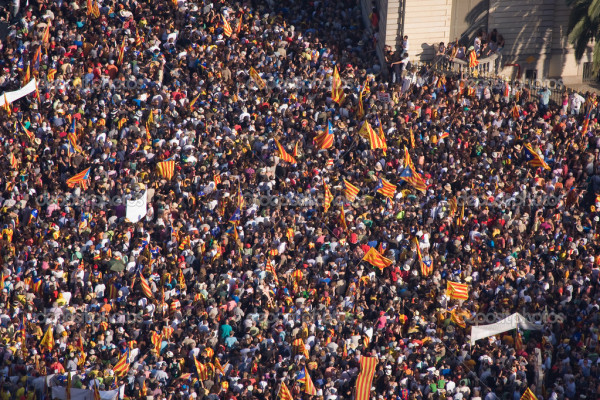 For many Catalans, that rally marked a paradigm shift. They began to change their mentality — we had to leave Spain behind. In the following years, mass demonstrations have always taken place on September 11, the Catalan Diada (National Day), to loudly and clearly demand independence for Catalonia.

When civil society became more independentist, the political parties took the cue and moderated their discourses. When the conservative, centre-right Catalanist CiU opted for independence, it was a seismic change. Unsurprisingly, the ERC — a republican and independentist party since 1931 — adjusted to the civil society driven paradigm shift by coming out firmly in favour of a Catalan republic.

The global economic crisis has led to political demands which also include economic elements: Catalonia cannot continue with the humiliating tax treatment to which it is subjected by Spain. It is estimated that the Catalonia contributes around 16,000 million Euros ($18 billion) annually to the coffers of the Spanish State.

With the arrival in 2011 of the conservative PP to power in Spain, the attacks on the language and culture of Catalonia started to become unbearable. Citizens, a party born in Catalonia, became another force that fights against separatism with an unusual fury, using all kinds of false arguments with media support funded by the Spanish economic elites that fear the independence of Catalonia.

Between 2009 and 2011, civil society groups organised a number of local referendums in favor of independence that gave broad support to the idea of the creation of a Catalan state.

With the creation of the Association of Municipalities for Independence — with 786 of 948 municipalities taking part — and the Catalan National Assembly, a grassroots organization that works to ensure effective independence, the population has participated in a more and more organized fashion in order to propagate a paradigm shift in favor of an independent Catalonia. 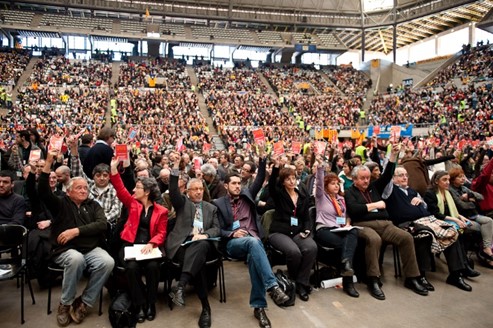 How has the Diada demonstration evolved in recent years?

After the great demonstration in July 2010 in protest against the ruling of the Constitutional Court, in subsequent years the diades have been taking on more and more importance and significance. Organized jointly since 2011 by Omnium Cultural and the recently-created Catalan National Assembly, every year the event is centred around the same theme: the fact that the Catalan people want their independence.

In 2012, the Catalan National Assembly and Omnium achieved their first goal by organizing a demonstration in Barcelona that attracted 1.5 million people with the slogan “Catalonia, Europe’s new state”. The following year was the “Catalan Way”, a human chain that swept the country from end-to-end — about 400 km (250 miles) and which was attended by 1.6 million people. “Catalan Way” was a tribute to the Baltic Way of 1989, which was formed by Latvians, Estonians, and Lithuanians in a human chain of 2 million people protesting for their independence from the USSR.

In 2014, the diada of the “V” took place: 2 million people formed a “V” on the streets of Barcelona with the colors of the Catalan flag to support the need for a vote on independence. On November 9, the Catalan Government, ignoring the warnings of the Spanish state, held a popular consultation on Catalonia’s independence, with 80% support for an independent state as 2.3 million Catalans voted. In 2015, the diada was called “The Freeway to a Catalan Republic” and was attended by 2 million people. 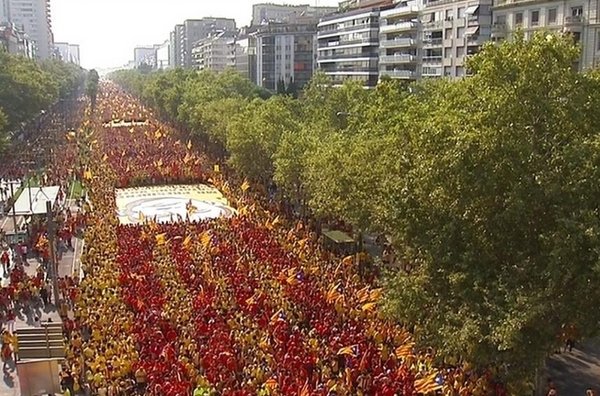 This year, Omnium and the ANC have opted for a decentralized format. Under the motto “Ready”, there will be demonstrations in Barcelona, Lleida, Tarragona, Salt, and Berga. A massive turnout is planned, even though — like every other year — those who are against independence try to make people believe that the independentists are failing. The Catalan people are ready for independence and will remain so. This day will be seen as the first chapter in an intense month of September.

So onto the current Catalan political situation: what’s been occurring in that regard in recent years?

The most important event of the political situation of recent years has been achieving a majority in favor of independence in the Parliament of Catalonia. Despite being an alliance that has had its problems, the legislative agreement between the Together for Yes coalition and Popular Unity Candidature (CUP) has allowed the Parliament to bring forward the road map towards independence that the citizens voted for on September 27 last year.

The emergence of Podemos across Spain, aiming to essentially oust the PSOE, has also had consequences for Catalonia. The old Catalan Green-Initiative movement, which was almost without parliamentary representation, merged into a “Catalan” version of Podemos (known as “Yes, Catalonia Can”) to promote a leftish movement opposed to independence in the Catalan Parliament. Some of those associated with “Yes, Catalonia Can”, a citizen-led movement called “Barcelona In Common”, are currently in power in Catalonia’s biggest city, with the anti-eviction activist Ada Colau as Mayor.

After Podemos’ poor results at the last Spanish elections in June, the party has decided to take a big risk and destablize the pro-independence government in Catalonia. Now, they want to form a new party in Catalonia and bring together colauistes and podemistes. This grouping has been attempting to squeeze the votes of the CUP, trying to make its supporters feel uncomfortable about being “separatist” and having agreements with the more systemic government of “Together For Yes”.

What has the Puigdemont Government done in recent times?

After the Diada, the Catalan President, Carles Puigdemont, will face a vote of confidence in Parliament to clarify what support he has to forward Catalonia’s disconnection from Spain.

The Government had agreed a program with the CUP, after the elections of September 27 in which independentists achieved a majority in the Parliament with 72 of 135 seats, to support the budget of “Together For Yes”. But the CUP refused to support the bill.

So far, the Catalan Parliament has passed several resolutions and laws that focus on the future legislation of an independent Catalan state: its own finances, creating Catalan Social Security and invoking a constitutional process. Before the summer, the Spanish Constitutional Court threatened the Parliament to attempt so it would pass the so-called “break-away” laws that had been agreed on between “Together For Yes” and the CUP.

Finally, the Parliament voted and democratically approved the conclusions of the Study of the Constitutional Process to create a Catalan Republic. Then the Spanish Constitutional Court suspended the vote of the Catalan Parliament and threatened its president, Carme Forcadell, with criminal charges. 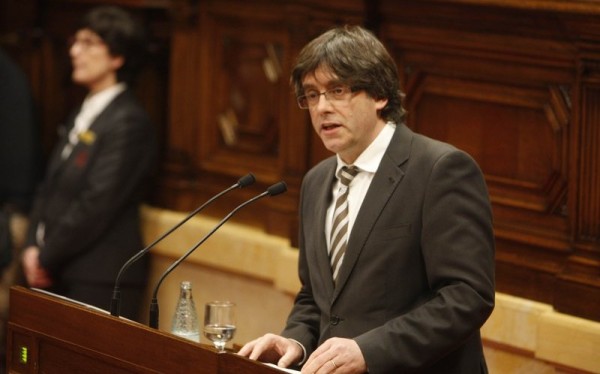 How has the Junts pel Sí coalition dealt with its radical, rupturist minority partner, the CUP, in recent months?

After the “no” of the CUP to the budget, which led to forceful rejection of the party’s actions both inside and outside the far-left movement, the attitude of the Government and especially that of President Puigdemont has changed and has become tougher.

Despite this uncertainty, the Together For Yes government is fully determined to go ahead with the road map to independence. It has continued to meet the CUP have continued to meet and overcome internal crises.

In late August, President Puigdemont and the new CUP leadership met. The confidence motion and the next steps in the process towards independence were on the table, as well as new budgets.

Could this be the last diada in a Catalonia that is not independent?

All independentists want this to be the case; however, we will see. We have a lot of hope and strength on our side and we are no longer as naïve as we once were. The Catalan people have been very clear about what they want. We expect our MPs, who we gave very clear pro-independence mandate to take us to our own state and to remain firm in their positions on this issue.

We will continue taking to the streets as often as needed. But now it is also time for our democratically-elected politicians to act on our behalf.

The threat to disqualify the President of Parliament, Carme Forcadell, by the Spanish Constitutional Court should have an unequivocal answer: all citizens should hope that the suspension is overturned. Catalonia and the Catalan people no longer have to obey the Constitutional Court in Madrid: it feels and behaves like the court of another country. We have already begun to be independent.