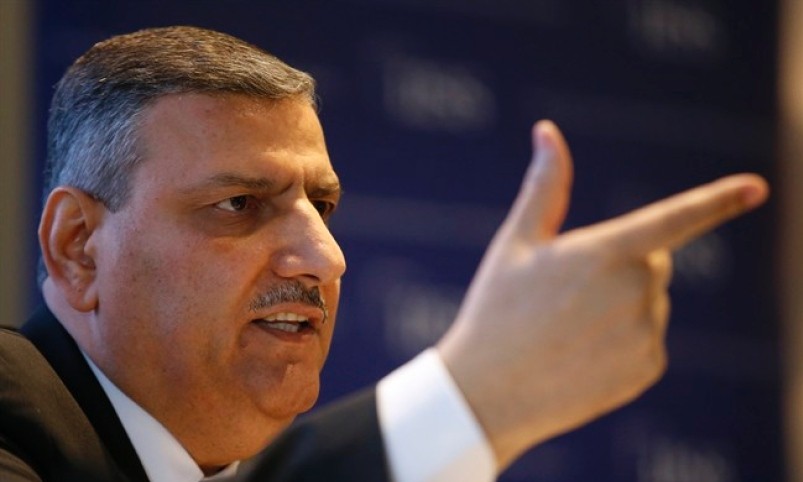 Syria’s opposition tried to seize the political initiative on Wednesday, tabling a detailed plan for political transition to end the country’s 5 1/2-year conflict.

After weeks in which Russia — supported by the US — had the leading position with high-profile if illusory declarations about “humanitarian corridors” and temporary ceasefires, the opposition-rebel High Negotiations Committee returned yesterday to the focus of a transitional governing authority, first proposed by the international community in 2012.

The 25-page plan set out a A six-month negotiating process leading to the transitional body, followed within a year by Presidential, Parliamentary, and municipal elections. President Assad will remain in office during the transitional period, but will be expected to depart by the end.

Promising “a political system that protects freedoms, safeguards individual rights, and that is founded upon the principles of liberty, equality, citizenship, and justice”, the HNC said many State officials would remain in their posts, ensuring that the system does not collapse. A joint military council will include representatives from the rebels and those in the Assad armed forces “who have not stained their hands with Syrian blood”.

The plan has almost no hope of progress given President Assad’s insistence on retaining power. Deputy Foreign Minister Feisal Mikdad said on Wednesday that any demands for Assad’s eventual departure from power were “crazy” and “unbelievable”: “We are saying, let the Syrian people decide their own fate. Their own future without intervention. Don’t make preconditions who will rule Syria.”

However, the opposition is hoping to win back international support with the initiative, after the steady move of the US towards partnership with Moscow, the Assad regime’s essential ally. Despite intense Russian bombing to prop up the regime — including the restoration of a siege on opposition areas in Aleppo, Syria’s largest city — the Obama Administration has continued to put its faith in a bilateral agreement promising a “humanitarian pause” in the conflict.

The head of the HNC, former Prime Minister Riad Hijab, said on Wednesday, “If what the Russians and the Americans agree upon is very much different from what the Syrians aspire to, then we shall not accept it.”

There was some sign of opposition success yesterday. British Foreign Minister Boris Johnson, who declared this spring that the West must work with Assad, wrote of “the scaffolding of a post-Assad Syria”. he is completely dissociated from reality as he has not yet realized that the time of mandate and tutelage has gone beyond the point of no return

Syria’s Foreign Ministry snapped in response, “[Johnson] is completely dissociated from reality as he has not yet realized that the time of mandate and tutelage has gone beyond the point of no return.”

Russian Foreign Minister Sergei Lavrov and US Secretary of State John Kerry will meet again in Geneva on Thursday.

American officials said last weekend that the two sides were close to a deal including intelligence sharing on airstrikes as well as arrangements for aid and temporary ceasefires. However, Russia pulled back as it carried out intensive bombing to support a pro-Assad advance near Aleppo, renewing the siege on opposition districts.

The top military commander of the jihadists of Jabhat Fatah al-Sham, formerly Jabhat al-Nusra, was killed on Thursday night in an airstrike.

Abu Omar Saraqeb was a commander of the recent rebel offensive southwest of Aleppo, which briefly succeeded in breaking the pro-Assad siege.

Another commander was seriously injured in the attack on a meeting in the village of Kafr Naha in Aleppo Province.

Russian warplanes have targeted rebel and jihadist commanders since Moscow’s intervention last September. Among the victims was the commander of the Jaish al-Islam faction, Zahran Alloush.

However, there is speculation tonight that the US might have carried out the attack.

Washington has attacked Jabhat al-Nusra/Jabhat Fatah al-Sham since it began bombing in Syria in September 2014.

The US and Russia have been deal for intelligence sharing over airstrikes against the Islamic State and Nusra/JFS.

Pro-Assad forces are on the verge of regaining control of the town of Ramouseh, tightening the reimposed sieges of opposition areas of Aleppo city.

Local sources report “massive airstrikes and flows of Iraqis and Hezbollah fighters” in the town on Thursday.

Rebels captured part of Ramouseh in their August offensive which also took a major artillery base and surrounding area to break the month-long siege.

However, intense Russian bombing helped the Syrian military, Hezbollah, and other Iranian-led foreign militia retake the base on Sunday.

The loss of Ramouseh would leave the Hikmeh school and the 1070 housing complex as the only rebel gains from the August offensive. 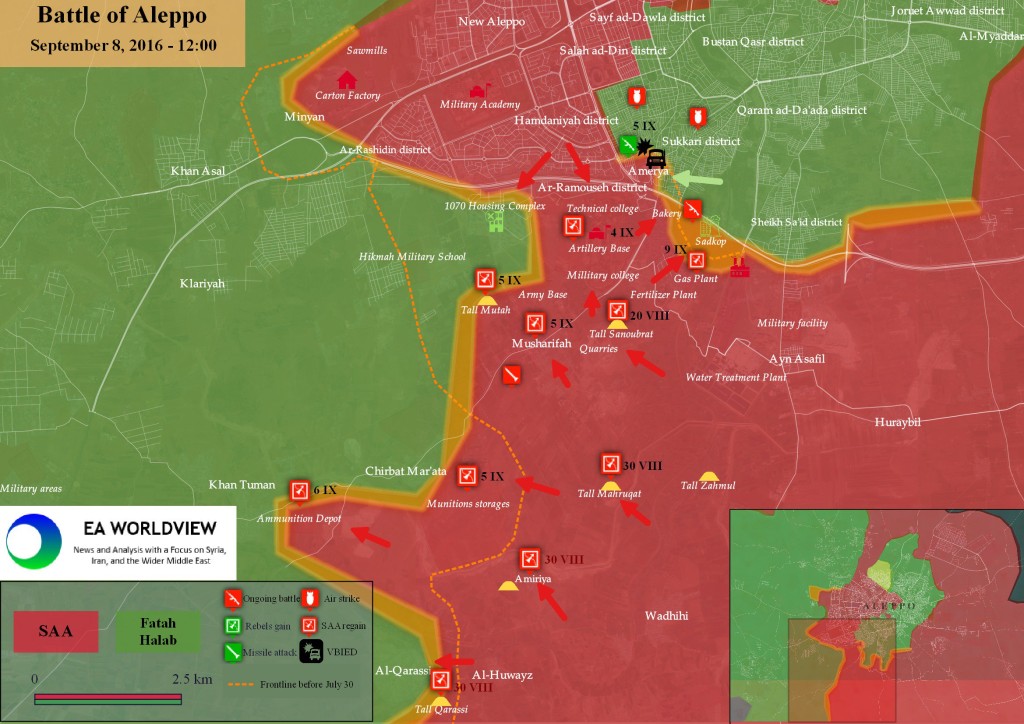 Russia has issued its toughest criticism of the Turkish military intervention into northern Syria that began on August 24.

Moscow said in a Wednesday:

Russia’s Foreign Ministry expresses serious concern in connection with the movement of the Syrian troops and paramilitary formations of the Syrian opposition, supported by them, inside Syrian territory.

We are paying attention to the fact that these actions are being conducted without coordination with the legitimate Syrian authorities and without approval on the part of the UN Security Council.

This puts in question the sovereignty and territorial integrity of the Syrian Arab Republic. With account for that, the position of Damascus appears fair and justified from the international-legal viewpoint.

We are proceeding from the fact that Turkey’s actions may additionally complicate the already difficult military-political situation in Syria, negatively affect the international efforts to develop a platform of settlement ensuring a more stable nature of the regime of cessation of hostilities, uninterrupted delivery of humanitarian aid laying the foundation for a solid peace and helping overcome the crisis in that country.

Russia had been muted in its response to the Turkish airstrikes, tanks, and special forces supporting a rebel offensive in northern Aleppo Province. The offensive has already taken a 55-km (34-mile) corridor along the Turkish-Syrian border from the Islamic State, and has advanced south to take some areas from the Kurdish-led Syrian Democratic Forces.

Moscow had even shifted its labeling of rebels, dropping the tag of “terrorists” and acknowledging the Syrian “opposition”.

Observers speculated on Wednesday that the tougher Russian language was prompted by the announcement of the Turkish military and rebels of an advance to take the town of al-Bab, about 40 km (25 miles) northeast of Aleppo city.

Analysts have foreseen a race for al-Bab between rebels, Kurdish militia, and pro-Assad forces as the Islamic State weakens.

The Israeli Air Force has carried out overnight attacks on Syrian army positions, after a rocket crossed the border and struck the Israeli-occupied Golan Heights.

Syrian State news agency SANA acknowledged the attacks east of the town of Hadar in Quneitra Province, with a source saying they caused “material damage”.

The Israeli attacks in Quneitra were the second within a week. The Israel Defense Forces said on the previous occasion that cross-border fire will not be tolerated and the Assad regime will be held responsible.

Neither of the rockets on the Golan caused casualties.

Pro-opposition Orient News broadcasts a report claiming that the regime has blocked dams to prevent use of the water of the Orontes River in opposition areas of northwest Syria, putting crops and fisheries at risk:

The Assad regime is exchanging 169 detainees in return of the bodies of five Russian soldiers killed when their helicopter was shot down in early August.

A lawyer who represented many of the prisoners said on Wednesday, “On Tuesday, 50 inmates including seven women were set free from Adra Prison and 84 others from Hama Prison.”

Michel Chammas added, “Another 31 inmates at Homs Prison were also informed that they are going to be let go but they still haven’t been released. Four others held elsewhere should also be released.”

All those freed were accused of “terrorism”.

Ahmad Qarra Ali of the Ahrar al-Sham rebel faction said, “We take care of our prisoners and the remains of our enemies because that is the only way to secure the release of our men, women and children who are prisoners of the regime.”

Two officers and three crew were killed when the Russian military helicopter was downed on August 1 in Idlib Province in northwest Syria.

The attack was the single deadliest for Moscow since its aerial intervention last September. Russia has officially acknowledged the deaths of 18 troops.